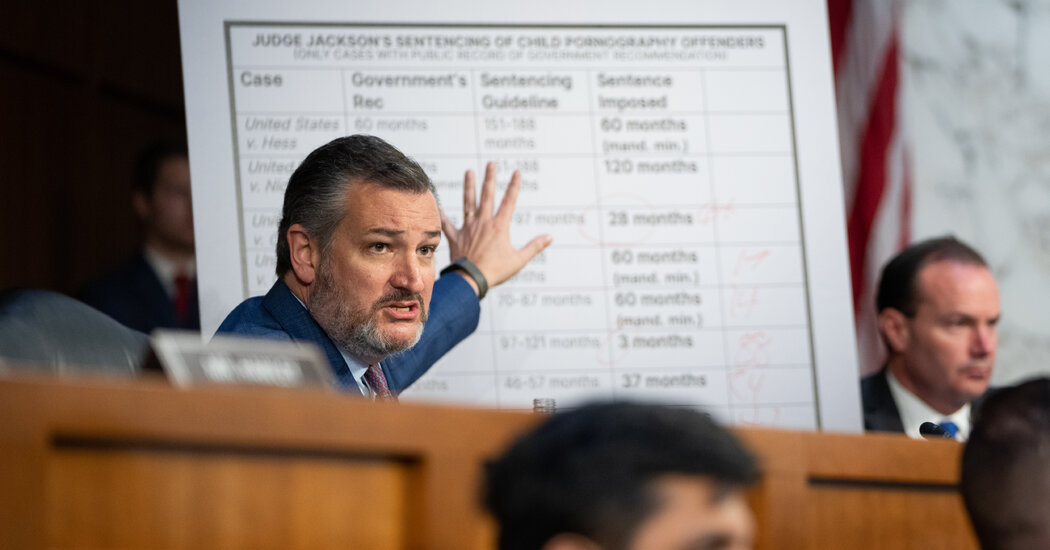 Republicans on the Senate Judiciary Committee have requested confidential presentence reports in child sexual abuse imagery cases overseen by Judge Ketanji Brown Jackson, part of an effort to portray her as soft on crime as the third day of her confirmation hearings neared its end.

The committee’s Democrats, who have the votes to block the effort, quickly dismissed the request, saying that it would unnecessarily expose victims, already exploited as minors and subjected to a painful legal process, to new danger and trauma.

“I would suggest that the information contained in these reports is dangerous — dangerous to the victims, and to the innocent people who are mentioned in these reports,” said Senator Richard J. Durbin, Democrat of Illinois, the committee’s chairman, during a testy exchange with Republicans late on Wednesday.

“It’s never been requested by this committee before,” added Mr. Durbin. “It’s merely a fishing expedition in dangerous territory.”

Probation officers prepare presentence reports after a defendant is convicted of a crime, and the documents are used to assist a judge in determining the appropriate sentence under federal law. Federal presentence reports typically contain a range of personal and historical information about a defendant, and might include sensitive details about relationships with other people, including victims.

The request was included in a letter written by Senator Ted Cruz, Republican of Texas. In it, Mr. Cruz and his colleagues accused White House officials of failing to disclose details of sentencing and probation reports from a handful of cases out of more than 100 decisions made by Judge Jackson during her four-year tenure on the U.S. District Court for the District of Columbia.

The White House and Senate Democrats denied they had done that, asserting they had turned over everything they had — a short spreadsheet containing a description of the sentences the judge had meted to defendants convicted of possessing images of child sexual abuse.

But Mr. Cruz, who hectored Judge Jackson in his questioning and interrupted her as she sought to respond, said he that did not believe them, and that he needed access to the reports in order to set the record straight.

“We cannot understand those cases without the presentence reports,” said Mr. Cruz, a Harvard Law School classmate of Judge Jackson’s who joined Senators Lindsey Graham of South Carolina and Josh Hawley of Missouri in arguing that the judge was too lenient on criminals for her to serve on the high court.

Republicans used several cases to prove that point, which echoes their party’s wider attacks on Democrats ahead of this fall’s midterm elections, but for much of the past two days they have focused on one particular case from 2013.

In 2012 Wesley Hawkins, an 18-year-old who was then in high school, started downloading graphic images of underaged children being sexually abused and, according to his lawyer, felt “confusion and shock rather than arousal.”

Prosecutors had asked for a two-year prison sentence. After reading the report and considering other factors, Judge Jackson handed down a three-month prison sentence, followed by six years of supervised release.

Judge Jackson, pressed time and again to justify her decision, said she was following federal sentencing guidelines approved by Congress, and repeatedly declined to discuss the case in detail.

“What I regret is that in a hearing about my qualifications to be a justice on the Supreme Court, we’ve spent a lot of time focusing on this small subset of my sentences,” she said after Mr. Hawley asked whether she regretted the sentence in the Hawkins case.

Republicans, including Senator Mike Lee, a Republican of Utah, argued that the presentence report could be redacted to protect the victims. But Mr. Durbin said he would fight its release.

“I am not going to be party to turning over this information and endangering the life of an innocent person for a political quest to find more information,” he said. “We have exhausted this topic.”