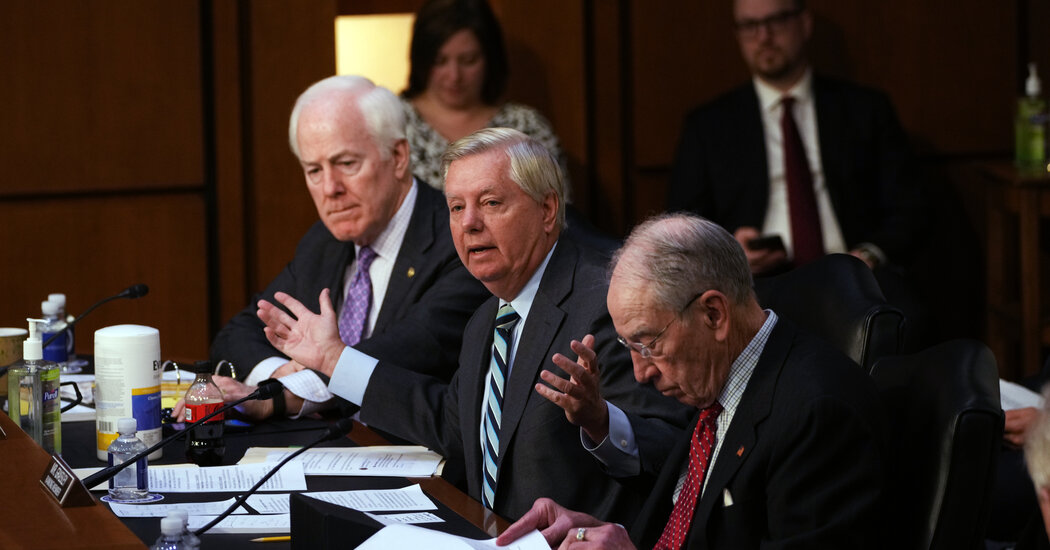 Senator Lindsey Graham of South Carolina used his opening statement at the Supreme Court confirmation hearing to air lingering grievances over the treatment of Brett M. Kavanaugh, in an apparent effort to justify Republicans’ tough questioning of Judge Ketanji Brown Jackson and rebut suggestions that challenging the first Black woman nominated to the court amounted to racism.

Mr. Graham seized on Justice Kavanaugh’s explosive confirmation hearings in 2018 as an example of unfair treatment of a Supreme Court nominee, asserting that Judge Jackson was already being afforded more respect and could expect a more civil tone in four days of hearings this week.

“None of us are going to do that to you,” said Mr. Graham, referring to Justice Kavanaugh’s hearings. He noted that Republicans could not even get through an opening statement in those proceedings before being interrupted by liberal activists.

Judge Jackson has never been accused of committing sexual assault, as Justice Kavanaugh was during his confirmation hearings. Christine Blasey Ford said the judge had sexually assaulted her when both were teenagers, an allegation that Justice Kavanaugh vehemently denied. As the process drew to a close, Mr. Graham delivered a fiery speech to the Senate Judiciary Committee denouncing Democrats’ tactics as “the most unethical sham since I’ve been in politics.”

The treatment of Mr. Kavanaugh evidently still grates on Mr. Graham and many Republicans, and by invoking that fight more than three years ago, they appeared to be seeking some political cover for challenging Judge Jackson, even if the circumstances of the two nominations were not remotely comparable.

Republicans, who were initially concerned about prompting a backlash if they attacked Judge Jackson too sharply, have adopted an increasingly aggressive approach in recent days and want to portray her as soft on crime, one of their central attack lines against Democrats in the upcoming midterm elections.

Senator Charles A. Grassley, the committee’s ranking Republican, kicked off the hearings by saying the goal was to avoid “a spectacle.”

“We will be fair and thorough, as people would expect us to be, but we won’t get down in the gutter like Democrats did during the Kavanaugh confirmation hearings,” Mr. Grassley said in his opening statement. “I’m sure you folks remember how bad that got.”

“No one is going to inquire about your teenage dating habits,” he told Judge Jackson.

None of the Republicans mentioned their treatment of Merrick Garland, President Barack Obama’s 2016 Supreme Court pick, whose nomination they blockaded for eight months to deny Mr. Obama the opportunity to fill the court vacancy before leaving office.

Judge Jackson’s hearings, unlike Judge Kavanaugh’s, will be focused at least in part on the issue of race, which Mr. Graham addressed in unusually unvarnished language on Monday.

He noted that Democrats had opposed judicial nominees of color appointed by Republicans, couching their objections as matters of political and legal philosophy.

“Bottom line here is, it is about philosophy when it’s someone of color on our side — it’s about we’re all racist if we ask hard questions,” said Mr. Graham, a former chairman of the committee.

“It’s not going to fly with us,” added Mr. Graham.

The senator, who has already signaled his opposition to Judge Jackson’s nomination, went on to criticize President Biden for not selecting J. Michelle Childs, a federal judge from his state who is also Black, instead of Judge Jackson.