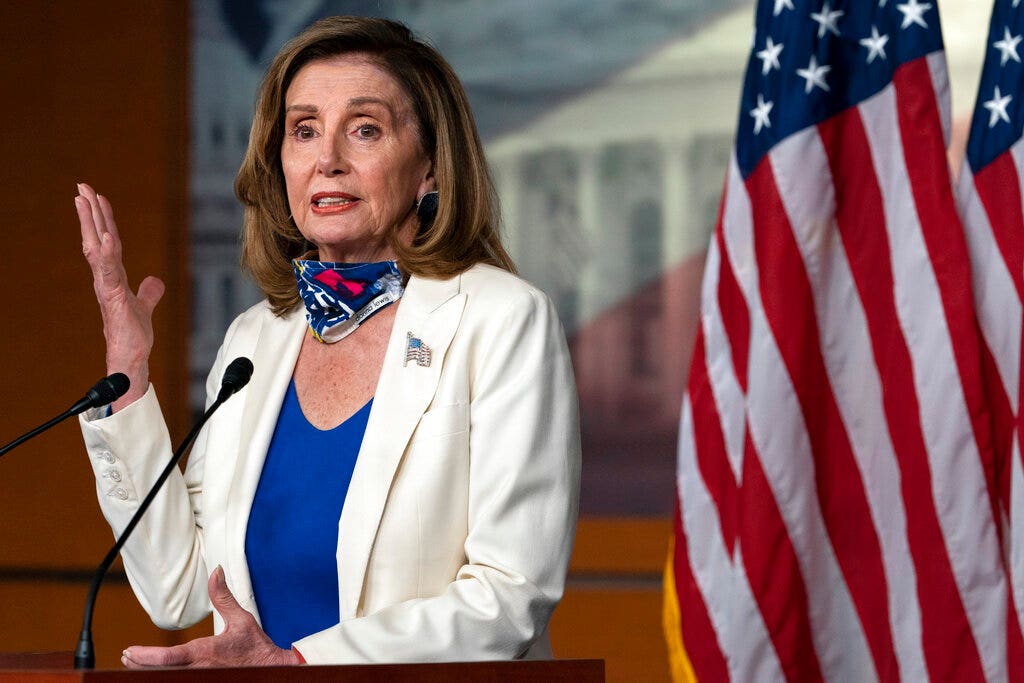 Republicans were baffled by House Speaker Nancy Pelosi’s Thursday suggestion that she might introduce a bill allowing a body appointed by Congress to invoke the 25th Amendment to remove President Trump from office as he recovers from the novel coronavirus.

“Tomorrow, by the way, tomorrow, come here tomorrow,” Pelosi said. “We’re going to be talking about the 25th Amendment.”

Pelosi was referring to a bill she will unveil Friday with Rep. Jamie Raskin, D-Md., that would allow Congress to establish a permanent body to determine whether the president is fit for office: an Oversight Commission on Presidential Capacity. The bill is expected to reflect legislation that Raskin introduced in 2017.

Still, Pelosi would have to convince Senate Republicans to go along with it. Plus, Vice President Mike Pence would also have to sign the declaration as well, which would be highly unlikely.

Trump fired back at “Crazy Nancy” on Twitter. “Crazy Nancy is the one who should be under observation,” he said. “They don’t call her Crazy for nothing!”

Trump said during a FOX Business interview Thursday morning that he is “feeling good,” and does not believe he is “contagious at all.”

“@SpeakerPelosi will stop at NOTHING to take down @realDonaldTrump,” he wrote on Twitter. “First it was the Russia hoax, then sham impeachment. Now she’s trying to invoke the 25th amendment because he… fully recovered from the coronavirus? We won’t let her get away with it.”

PELOSI NOT CONSIDERING ANOTHER TRUMP IMPEACHMENT: ‘I DON’T THINK HE’S WORTH THE TROUBLE AT THIS POINT’

“Congressional Democrats have not stopped their quest to remove President @realDonaldTrump from office since the day he was sworn into office, working night and day to overturn the will of Americans,” Rep. Andy Biggs, R-Ariz., wrote on Twitter.  “Here is another installment of their pathetic series.”

“The person who is third in line to the nuclear codes but was “setup” by her hair salon wants to have a conversation about the 25th amendment… Good one,” the president’s son, Donald Trump Jr., wrote on Twitter.

“I wouldn’t put it past @SpeakerPelosi to stage a coup,” Rep. Mark Green, R-Tenn., said. “She has already weaponized impeachment, what’s to keep her from weaponizing the 25th amendment?”

Pelosi had earlier questioned the status of Trump’s health, as well as exactly how long he has had COVID-19.

“I think that the public needs to know the health condition of the President,” Pelosi said. “There’s one question that he refused to answer … when was his last negative test?” Pelosi said that this information is necessary in order to “make a judgment about the actions that were taken after that.”