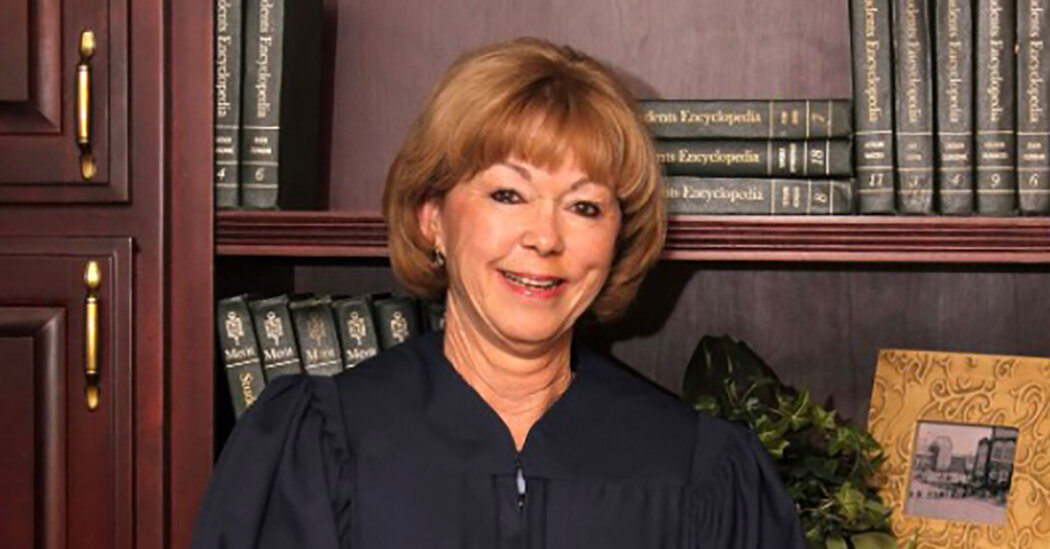 They set flags to half-staff across the Choctaw Nation in Oklahoma after the death of Justice Ruth Bader Ginsburg in September — and lowered them again 11 days later to honor Rebecca Cryer, a tribal judge who led a purposeful, parallel life in the law.

Judge Cryer was confined to a hospital bed with the new coronavirus, trying to manage her docket for the Choctaw Tribal Court on a smartphone, when she heard that Justice Ginsburg had died.

She took it hard, yet not without wit. Judge Cryer, who combined black-robe rectitude with deadpan humor, sent photographic portraits of herself to a friend just in case President Trump chose her to replace Justice Ginsburg on the United States Supreme Court. She wanted to make sure that she’d look presentable.

“She was texting me all these shots and kept asking, ‘Which one of these hairdos would Trump like best?’” the friend, Pam Young, a judicial administrator, said in a phone interview. “That was her. She was tough. She was funny. There were so many similarities between her and Justice Ginsburg — they really held their own in a male-dominated world.”

Judge Cryer died of the virus on Sept. 29 at Norman Regional Hospital in Norman, Okla., according to her family. She was 73.

She had led a blended life in the law, modulating between legal work for the state and tribal justice — at times traveling the country to advise poorly funded native courts, where American jurisprudence meets an imperative to preserve native customs.

One of her state jobs was as a trial lawyer for the Oklahoma Department of Securities. On the morning of April 19, 1995, she was leafing through a folder of papers on the fifth floor of a building across the street from the nine-story Alfred P. Murrah Federal Building in downtown Oklahoma City when, at 9:02, a truck bomb exploded outside, shattering her windows and covering her with debris.

Lying there, in shock, she could hear the “sound of sirens and children crying” on the street below, she later told a friend.

The bomb, set off by an ex-Army soldier turned terrorist, Timothy McVeigh, destroyed a third of the Murrah building and killed 168 people, including 19 children. (Mr. McVeigh was executed in 2001.)

Judge Cryer’s cuts were so severe that they required 100 stitches, and her legs were so bruised and her lungs so choked with dust that she required hospitalization days after returning home.

Rebecca Alice Schoemann was born on Oct. 9, 1946, in Shawnee, Okla., the daughter of DeLaine and Frances F. (Forrester) Schoemann. Her father ran a lumber mill, and her mother worked various jobs — managing a motel was one — to make ends meet while raising four children.

Judge Cryer, whose ancestors were members of the Pottawatomie tribe, grew up in Wanette, a one-stoplight town an hour’s drive southeast of Oklahoma City.

That is where she met David Cryer, in high school. They married when she was 18 and had a son. Mr. Cryer was in the Army, and the family bounced among Army posts.

Ms. Cryer enrolled in college courses whenever she could. The family eventually settled in Norman, where she earned her undergraduate degree at the University of Oklahoma. She graduated from the law school there in 1977 after giving birth to a daughter.

She is survived by her husband; her daughter, Aimie Black; her sons, Eric and Andrew; her sisters, Gloria Shallcross and Rebecca Page; a brother, Dee Martin Schoemann; and five grandchildren.

Judge Cryer began her legal career in 1978 as a staff lawyer with Legal Services of Western Oklahoma, representing Indigenous clients in court. It was around that time she began serving as a magistrate for the Court of Indian Offenses at the Shawnee Agency in Oklahoma. She went to work full-time for the Choctaw nation, at a tribal courthouse in Durant, after retiring from the state securities department.

Many co-workers at the courthouse first heard about her experience in the bombing after a working dinner in Oklahoma City a couple of years ago. Judge Cryer walked them over to the memorial Survivor Wall at the Murrah site to point out her name.

“Her first point was that, ‘You need to know that this happened to me,’” said Mark Morrison, who served on the Choctaw tribal court with Judge Cryer. “Her other point was that good trumps evil every time.”