Readers Respond to the May 2021 Issue 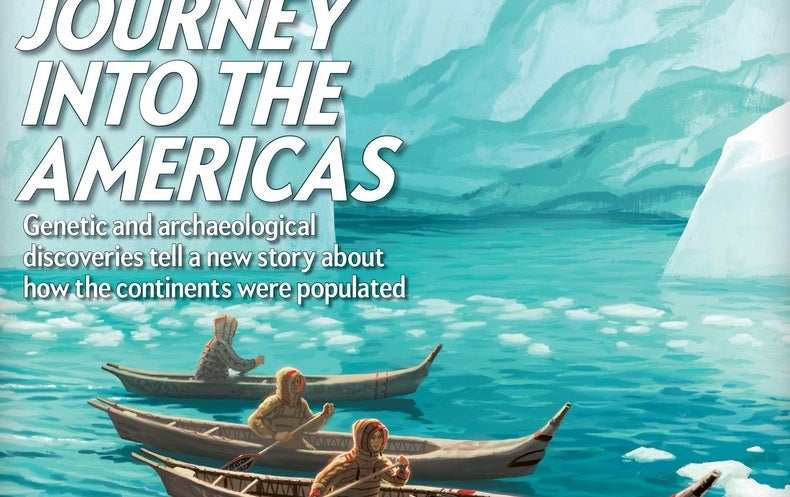 “Journey into the Americas,” by Jennifer Raff, describes how DNA evidence has revealed a more complex picture of the peopling of the American continents. I have always wondered whether the Polynesians who got as far east as Easter Island could have reached South America. Could the anomalous archaeological sites in southern Chile that Raff describes have been the work of people who originated from the west rather than the north?

RAFF REPLIES: Despite popular speculation regarding a shared ancestry among peoples of Polynesia and South America (promoted most notably by Norwegian explorer Thor Heyerdahl, who believed that Polynesia was settled by South Americans), archaeological and genetic evidence unambiguously shows separate origins for these groups.

Ancient Polynesians and ancient coastal Native Americans were superb mariners, however. And although direct archaeological evidence is scarce, there have been a number of different lines of evidence that appear to support at least some pre-Columbian interactions between them, including linguistic patterns and the presence of sweet potatoes from South America throughout Polynesia. Recently evidence of gene flow between Native American populations and Pacific Islanders has been found that dates to several hundred years before European contact: as early as approximately A.D. 1150. Exactly where this gene flow took place—whether on the South American coast or in the Marquesas Islands (where it first appeared)—cannot be answered with current genetic evidence. But at present, this evidence supports more limited interactions than what would presumably be required for the founding of entire populations.

I agree with Chanda Prescod-Weinstein, Sarah Tuttle, Lucianne Walkowicz and Brian Nord that we should “Rename the James Webb Space Telescope” [Forum]. In the spirit of the great strides made by women in science, often demeaned and passed over because of paternalistic bias, there are female scientists much more worthy of lending their name to “the next Hubble”: Astronomer Henrietta Swan Leavitt identified 2,400 variable stars, helping Edwin Hubble determine the expanding universe. The late researcher Katherine Johnson’s mathematical genius provided unprecedented calculations for viable crewed orbital spaceflights. Physicist Chien-Shiung Wu helped to guide the Manhattan Project. X-ray crystallographer Rosalind Franklin had a central role in discovering the structure of DNA.

Any one of them better epitomizes the deeper and clearer vision the telescope will give humankind. Surely that clearer vision shouldn’t just represent the vacuum of space but also the confines of our democracy.

In “A New Map of the Universe,” Kyle Dawson and Will Percival describe the early universe at a time when it “grew so fast that subatomic scales became the size of a golf ball in 10−32 second.” If we consider an ordinary golf ball with a diameter of 4.268 centimeters, the speed of expansion of this early universe would be 4.268 × 1030 meters per second, which is vastly faster than the speed of light. Was that possible all those billions of years ago?

The article notes that dark matter is driving the accelerated expansion of the universe and that galaxies that are farther away reflect earlier cosmic eras. If redshifts indicate that such galaxies are receding faster, doesn’t that mean that those closer to our time frame are receding slower and thus that the rate of expansion is slowing down?

THE AUTHORS REPLY: To answer Gordon: The limit of the speed of light refers only to objects moving through space. The expansion of space itself is allowed to happen at faster rates. Our ability to consider space in this way is consistent with Einstein’s theory of relativity, which itself explains the limit on how fast objects can travel through space. This difference tells us something profound about the nature of the universe and how we should consider the space in which we exist.

In response to Robison: As a simple analogy, consider a three-dimensional cake with chocolate chips, representing galaxies, expanding in an oven. The chips near to one another move apart slowly because there is little cake dough expanding between them. There is more cake expanding between those that are farther apart, so they recede from one another more rapidly. While the expansion of the universe is the same at all locations, distance matters for our observation of the recession of galaxies away from us. We see galaxies as they were in the past because their light takes time to reach us, coupling distance and age—we can see objects of a certain age only at a certain distance. Using a four-dimensional spacetime model to interpret the redshifts we observe, we find the expansion of the universe matches a model in which that expansion speeds up everywhere—even though the recession velocities are different at different distances and ages.

In “The Riddle of Dolphin Handedness,” Kelly Jaakkola reports on asymmetries in the directions in which dolphins spin. Earth’s rotation creates the Coriolis effect, which influences the speeds of launched rockets and the spins of hurricanes. Could that effect cause dolphins’ angular dives to differ in the Northern and Southern Hemispheres? It would be interesting to test whether the rotation of Earth has a role in the handedness of all biological systems.

As a retired genetics teacher, Jaakkola’s article immediately brings to mind the right-handed helix of B-DNA (the more common Watson-Crick version) and the left-handed helix of the less common Z-DNA (Z stands for “zigzag backbone”). The “right-hand rule” of electromagnetism Jaakkola mentions helps keep those straight, too.

“What Makes a Problem ‘Hard’?,” by Naomi Oreskes [Observatory], should have described Garry Kasparov as the first world chess champion to lose to a computer, not the first grand master to do so.