Readers Respond to the February 2021 Issue 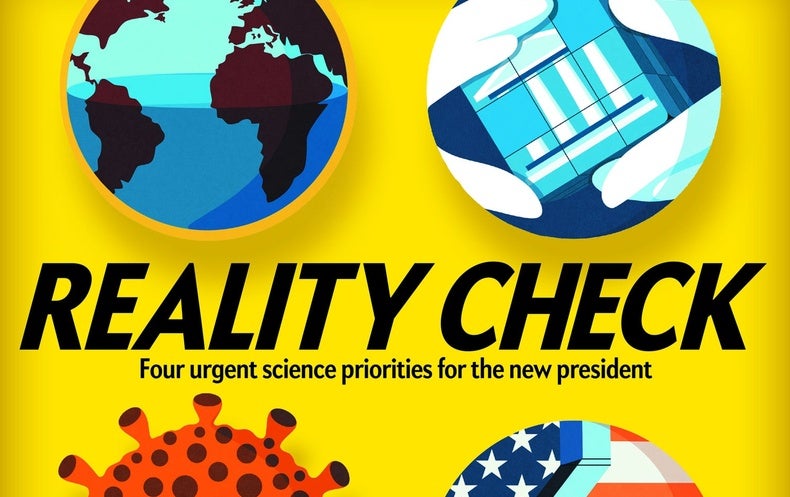 “Cosmic Conundrum,” by Clara Moskowitz, describes how the most likely cause of the accelerating expansion of the universe is “vacuum energy,” the effect of virtual particles popping in and out of existence. But it does not explain why vacuum energy would cause the universe to expand. I would think that if space is filled with evanescent virtual particles, they would collectively exert a huge gravitational force that would counteract expansion.

MOSKOWITZ REPLIES: Vacuum energy is positive and has a constant density throughout space. Thus, increasing the volume of space increases the total amount of vacuum energy, which requires work. It is the opposite of a gas, whose energy and density decrease as it expands. When that happens, the gas exerts positive pressure. In contrast, because vacuum energy is positive, it exerts negative pressure, so galaxies on the largest scales are pushed apart, not pulled together.

In “The Four Most Pressing Science Priorities for the Next President,” four articles focus on the need to address COVID, attention to evidence, climate change and the restoration of expertise. From a psychological point of view, all these topics are deeply intertwined, and the absence of that discussion weakens the theme of the report. Controlling COVID will, for example, end up being a challenge to human collaboration in exactly the same way mitigating the climate problem will. Both involve our capacity to not only work together but accept unwanted trade-offs. These issues stem from our enormous distrust of experts and hidden feelings (shame, fear of manipulation, and so on), along with an inherent uncertainty about the nature of our various realities.

The problems your report identifies are important but require a much deeper theory. What would that discussion entail? To begin with, a lot of self-searching. Maybe there could be an edition of the magazine that starts from that stance.

THE EDITORS REPLY: In September 2019 we published a special issue called Truth, Lies & Uncertainty. It explores such themes across disciplines and covers a range of neuroscience, psychology and social sciences.

In “On the Basis of Testosterone,” Grace Huckins compassionately chronicles the fact that while male athletes who were born with a genetic predisposition for height, strength or aerobic endurance are welcome to compete, women who were born with a similar predisposition are subject to intense scrutiny of their chromosomes and hormone levels. As the article describes, unnecessary medical interventions are currently ordered for women with high testosterone who wish to take part in longer international track events.

As a simple solution to this hypocrisy, the regulators should add the word “intentional” to “performance enhancement” as they exert scrutiny. It is not intentional when a man is born with genes that will lead to height or strength. Neither is it intentional when a woman is born with XY chromosomes, for example. The Olympic creed, as espoused by the modern games’ founder, is that the important thing “is not the winning but the taking part.” All athletes should have the equal right to take part.

I have been an avid reader of Scientific American for nearly 65 years, and publishing my article “Ensuring the Longevity of Digital Documents” in your January 1995 issue was one of the high points of my career as a computer scientist.

While I have largely been uninterested in competitive sports, the issues Huckins so adeptly considers have conceptual and practical implications far beyond that area. And she does an excellent job of teasing out the scientific, social and philosophical questions that her subject raises.

The article reinforces my frequent observation that overturning the metaphorical rock representing any subject always reveals far more complexity, subtlety, depth and motivation for further exploration than we might expect. This, to me, is the wonder of science and of the intellectual curiosity that is one of the joys of life for those of us who are fortunate enough to experience it.

“Controlling COVID,” by Tanya Lewis [“The Four Most Pressing Science Priorities for the Next President”], says, “COVID-19 … has killed hundreds of thousands of people in the U.S.—the highest toll of any country.” Though true numerically, this phrase is misleading. Per Johns Hopkins University on February 1, the U.S. had 441,319 total deaths. But it ranked 10th among deaths per 100,000 people in each country’s population, with 134.89 deaths per 100,000. And among deaths per all reported cases, it was far down the list, with a rate of 1.7 percent.

In “Arachnid Architects” [Advances], Rachel Nuwer reports on a study exploring how spiders’ legs automatically move to build webs that was led by biologist Fritz Vollrath. She writes that the researchers “tested the rules [of this movement] by programming a simulated virtual spider, and Vollrath says the next step is to build a physical spider robot” (emphasis mine).

If somebody could let Vollrath know that robot spiders are a bad idea, I would appreciate it. I’ve seen enough horror movies to recognize that this will not end well.

Jordan Salama clearly expresses our constant concern, albeit almost panic, about the neglect of the planet in “Earth Is on Fire” [Forum; January 2021]. He is not Chicken Little. His words ring true, and, sadly, when the U.S. should have been leading this battle, we took a four-year hiatus from all responsibility. I am 76 years old. Salama’s generation can rest assured that it is not alone. Many of us choose our candidates, our stores, our purchases and our habits based on “saving the world” from trash, pollution, erosion and neglect. We are with you.

THE EDITORS REPLY: In April, Scientific American and other major news outlets in a worldwide network called Covering Climate Now signed on to a declaration to refer to the ramifications of climate change as a “climate emergency.”

“Reestablishing Reality,” by Jen Schwartz [“The Four Most Pressing Science Priorities for the Next President”], should have described Alondra Nelson as a professor at the Institute for Advanced Study in Princeton, N.J., not at Princeton University.