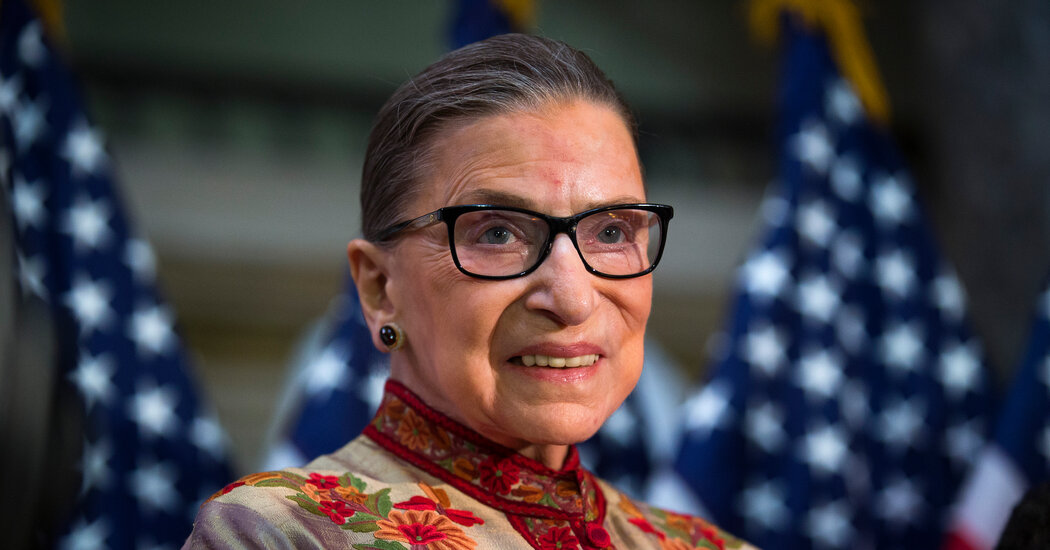 Political leaders from both sides of the aisle and the chief justice of the United States offered tributes to Justice Ruth Bader Ginsburg, who died on Friday, remembering her as a trailblazer and a warrior for justice. But their comments also reflected what is expected to be a bruising fight over her replacement.

The chief justice, John G. Roberts Jr., said in a statement released by the court: “Our nation has lost a jurist of historic stature. We at the Supreme Court have lost a cherished colleague. Today we mourn but with confidence that future generations will remember Ruth Bader Ginsburg as we knew her — a tireless and resolute champion of justice.”

Hillary Clinton, who was the 2016 Democratic presidential nominee and whose husband, former President Bill Clinton, nominated the justice to the court, said on Twitter that Justice Ginsburg had “paved the way for so many women, including me.”

“There will never be another like her,” she added. “Thank you RBG.”

The sudden news of Justice Ginsburg’s death jolted the political world in Washington and reverberated far beyond, introducing the potential for a brutal and partisan nomination fight over the final stretch of the 2020 presidential campaign and a new layer of urgency surrounding whom voters will ultimately elect.

Mr. Trump has long brandished his efforts to appoint Republican judges and remake the courts as a re-election argument to weary right-leaning voters, and he released a list of potential Supreme Court nominees this month.

Speaking briefly to reporters before boarding Air Force One on Friday night, Mr. Trump did not mention whether he would seek to fill Justice Ginsburg’s seat.

And on Friday night, the Senate majority leader, Mitch McConnell, said, “President Trump’s nominee will receive a vote on the floor of the United States Senate.”

Joseph R. Biden Jr., the Democratic presidential nominee, called Justice Ginsburg a “beloved figure” and said her seat should not be filled until after the presidential election.

Aware that Republicans are likely to seek to appoint a replacement for Justice Ginsburg, Senator Chuck Schumer, Democrat of New York and the minority leader, urged his Republican colleagues to exercise patience.

“The American people should have a voice in the selection of their next Supreme Court Justice,” he said. “Therefore, this vacancy should not be filled until we have a new president.”

Senator Mazie Hirono, a Democrat on the Senate Judiciary Committee, said she had a message for the president and for Mr. McConnell: “The best and only way to honor the life’s work of Justice Ginsburg, a giant of a jurist, is to honor her fervent final wish that she not be replaced until a new president is installed.”

Republicans argued four years ago that a vacant Supreme Court seat should not be filled in an election year. Led by Mr. McConnell, they denied Judge Merrick B. Garland — President Barack Obama’s choice to fill a Supreme Court vacancy — a hearing in 2016 and successfully kept him off the court.

In his statement on Friday, Mr. McConnell said: “Since the 1880s, no Senate has confirmed an opposite-party president’s Supreme Court nominee in a presidential election year. By contrast, Americans re-elected our majority in 2016 and expanded it in 2018 because we pledged to work with President Trump and support his agenda, particularly his outstanding appointments to the federal judiciary. Once again, we will keep our promise.”

Senator Kelly Loeffler, a Republican of Georgia, said on Twitter that the seat should be filled ahead of the election.

“Our country’s future is at stake & @realDonaldTrump has every right to pick a new justice before the election,” she wrote. “I look forward to supporting a strict constructionist who will protect the right to life & safeguard our conservative values.”

While the political jockeying geared up over what would happen next in filling the vacancy, other leaders offered accolades for the justice’s temperament and achievements.

Former President Jimmy Carter called Justice Ginsburg a “powerful legal mind and a staunch advocate for gender equality” and said she was a “beacon of justice during her long and remarkable career.”

In a separate tweet, Mr. Schumer wrote: “Tonight, we mourn the passing of a giant in American history, a champion for justice, a trailblazer for women. She would want us all to fight as hard as we can to preserve her legacy.”

Senator Bernie Sanders of Vermont, a former Democratic presidential candidate, said that Justice Ginsburg had been “an extraordinary champion of justice and equal rights, and will be remembered as one of the great justices in modern American history.”

Senator Amy Klobuchar, a former prosecutor, a member of the Senate Judiciary Committee and a former presidential Democratic candidate, said of the justice on Twitter: “An icon. A hero. A woman way ahead of her time.”

Pete Buttigieg, the former mayor of South Bend, Ind., who also mounted a presidential campaign, called Justice Ginsburg “a titan of justice” whose “jurisprudence expanded the rights of all Americans, shaping our lives for the better.”

Former President George W. Bush, a Republican, said in a statement that the justice had “loved our country.”

“She dedicated many of her 87 remarkable years to the pursuit of justice and equality, and she inspired more than one generation of women and girls,” he said.

Lindsey Graham, a Republican senator from South Carolina and close ally of President Trump, called the justice “a trailblazer who possessed tremendous passion for her causes.”

“She served with honor and distinction as a member of the Supreme Court,” he said on Twitter. “While I had many differences with her on legal philosophy, I appreciate her service to our nation.”

And Rudolph W. Giuliani, President Trump’s personal lawyer, called the justice “a credit to the Court.”

“I disagreed with many of her decisions,” he wrote on Twitter, “but they were all well reasoned and well argued.”

Speaker Nancy Pelosi ordered the flags at the U.S. Capitol to be flown at half-staff, her deputy chief of staff, Drew Hammill, said on Twitter.