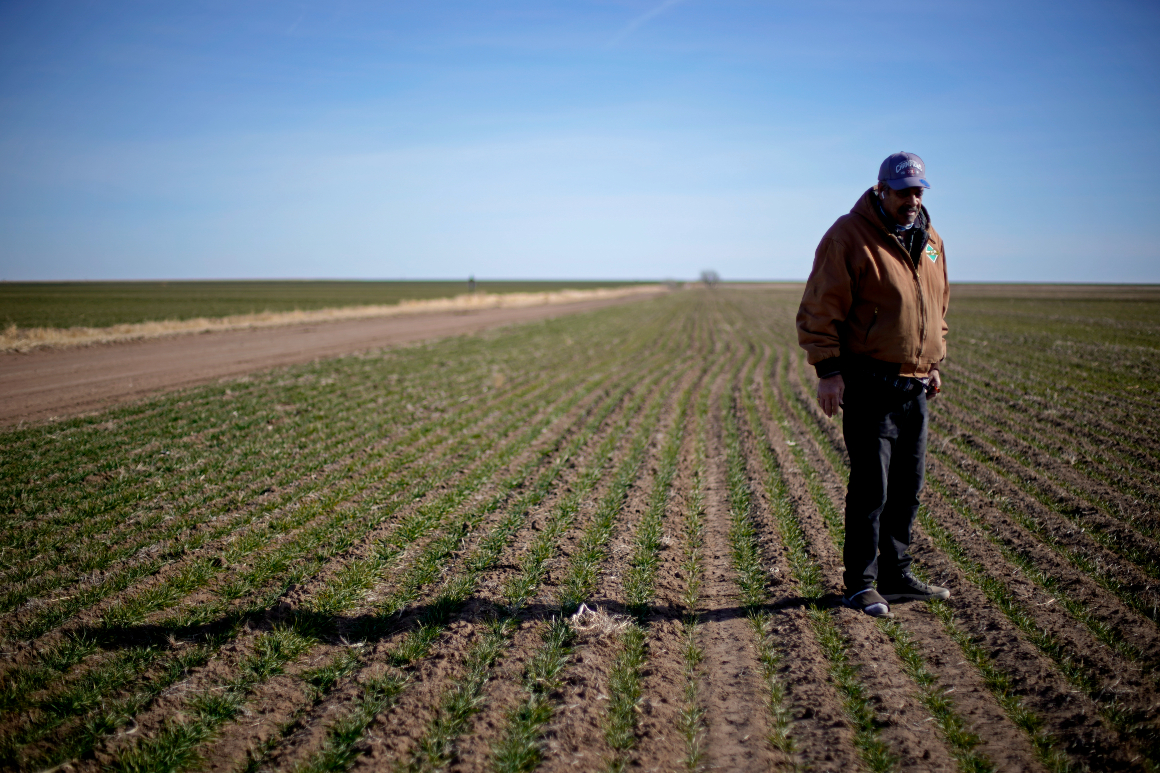 “This data affirms what our elder farmers have been saying about the U.S. Department of Agriculture for decades,” said Tracy Lloyd McCurty, executive director of the Black Belt Justice Center, a legal and advocacy nonprofit that represents Black farmers. It reveals the “abysmal failures” of previous legal settlements in dismantling pervasive racial discrimination, she said.

How the administration approaches USDA lending will be a major test of whether President Joe Biden can make good on his broader pledge to combat racial discrimination.

The plan to use $4 billion from the recent coronavirus aid package to forgive loans to farmers of color is now tied up in legal challenges filed by white farmers. But even if USDA prevails in court, Agriculture Secretary Tom Vilsack will still face the onerous tasks of overhauling entrenched practices and convincing Black farmers and their advocates that change has come.

“The American Rescue Plan’s effort is to begin addressing the cumulative effect of that discrimination in terms of socially disadvantaged producers,” Vilsack told reporters in May. “I think there is a very legitimate reason for doing what we are doing. I think it has to be complemented with additional steps.”

The USDA said it is reviewing all of the department’s agencies and programs through an internal working group. It will examine how to provide better technical assistance for socially disadvantaged and local producers, as well as improve access to land and markets. An external review is set to begin in the fall.

“The secretary is committed to building a new USDA at every level, but this work has just begun and it will require a steady focus and march forward,” a USDA spokesperson told POLITICO.

USDA is a sprawling bureaucracy whose nearly 100,000 employees are deployed in more than 4,500 locations across the country and abroad. The department, which was created during the Civil War, has by its own accounting a lengthy history of bias against small farms in general and in particular against Black farmers, many of whom run operations with annual sales of less than $250,000.

Black farmers filed a class-action lawsuit in 1997, complaining that USDA denied them timely loans and debt restructuring, forcing many into foreclosure.

A settlement in that case, Pigford v. Glickman, led to payouts of up to $50,000 per farmer in 1997 and 2010, but many farmers failed to submit requests because of restrictive deadlines and the burden of gathering documents. The settlement fell short of addressing the problems resulting from the discriminatory lending, advocates contend.

The problem, many say, lies at the local level. County offices of USDA’s lending arm, the Farm Service Agency, are often the first and only point of contact for farmers seeking access to government assistance programs. Black farmers say their interactions with FSA officials, who play a pivotal role in determining whether loans are granted, are plagued by racial bias, inexperienced personnel and lack of bandwidth to help with applications.

“I don’t even know if USDA understands how rampant the issues are in 2021 in these small, local county offices,” said Carolyn Jones, a Black farmer and executive director for the Mississippi Minority Farmers Alliance.

“The process put in place keeps you from being able to apply,” Jones said, citing issues including overly complex applications, a lack of access to a competitive market and outright discrimination.

To address the disparate treatment, USDA should consider increasing outside oversight of its branches and programs and remodeling its approach to extending credit, said Jillian Hishaw, who launched Family Agriculture Resource Management Services to help farmers from historically disadvantaged groups.

“There should always be some type of objective, external party reviewing, especially when it comes to lending and FSA,” Hishaw said, adding that the agency should “also consider other criteria when it comes to qualifying for loans.”

Other advocates are pushing for passage of Sen. Cory Booker’s Justice for Black Farmers Act, S. 300 (117), — legislation that they say includes many of the changes they want to see at USDA, such as increased oversight and an independent financial institution to provide unbiased lending.

Some argue that the USDA should re-conceive the criteria it uses for extending credit, which favors large, wealthy farms. The average farm for a Black farmer is 132 acres, according to the 2017 Agricultural Census, the lowest of any socially disadvantaged group. That compares with 431 acres for white farmers.

Cesar Escalante, a professor of agricultural and applied economics at the University of Georgia who has studied loan patterns for socially disadvantaged farmers, co-authored a study published last year in the Agricultural Finance Review, showing that minority borrowers were often given smaller loan amounts with higher interest rates because they had poorer results in credit scoring models.

“We know that race is not a factor in determining credit scores,” Escalante said. “It comes down to profitability and size.”

Farm size was also a reason so few farmers of color received aid under the Coronavirus Food Assistance Program, which were grant payments to farmers intended to offset lost sales during the pandemic. Black farmers received the smallest share among socially disadvantaged groups.

“It’s pretty clear white farmers did pretty well under that program because of the way it was structured. It’s structured on size, it’s structured on production,” Vilsack said during a recent White House press conference.

The total number of direct loans to Black farmers has fallen precipitously in recent years, from a peak of 945 in 2015 to a 10-year low of 460 in 2020. Direct loans are available for farmers to put toward a wide variety of purchases, repairs and investments.

Poor credit is the most common reason cited for rejection of Black farmers’ direct loan applications, even though the program is designed for farmers who are unable to get loans from other financial institutions. That irony is not lost on farmers like Travis Cleaver of Hodgenville, Ky., who says he has extensive experience dealing with USDA lending programs.

“If you have good credit they say ‘go get a loan at a primary institute, you don’t need us’. So it’s a double-edged sword,” Cleaver said in an interview. “To me it’s just trickery because you have bad credit or you have too good credit. They have too many loopholes.”

For their part, farmers would like to see the agency’s local offices play a more helpful role than they typically have in the past.

Thelonious Cook, who started a small Virginia farm in 2015, said that when he asked his local FSA office about potential loans or programs for socially disadvantaged farmers, he was told that none existed, even though the agency does target a portion of aid for that group.

Cook said he was also frustrated by the complicated application process.

“It’s a waste of my time going through the mound of applications. You need someone to help you sift through it. You need people who are there,” he said.

That sentiment was echoed by Cleaver, the Black farmer from Kentucky, who said the process can be especially daunting when seeking money to buy land because an approval letter is required from a real estate agent before applying.

“You might waste all your time trying to get an approval letter and still not get a loan. I probably messed the loan up four times in the application just because I didn’t understand it,” he said. “The package is so thick and so intimidating, it’s not something you are accustomed to doing.”

What helped Cleaver was a woman in the FSA office who took the time to explain the processes.

“She was like an angel. I had been going through the loan officers and the HBCU [historically Black colleges and universities] that was here and they couldn’t get anything done,” he said. “[She] held my hand and she told me everything step by step. She was patient, she was polite.”