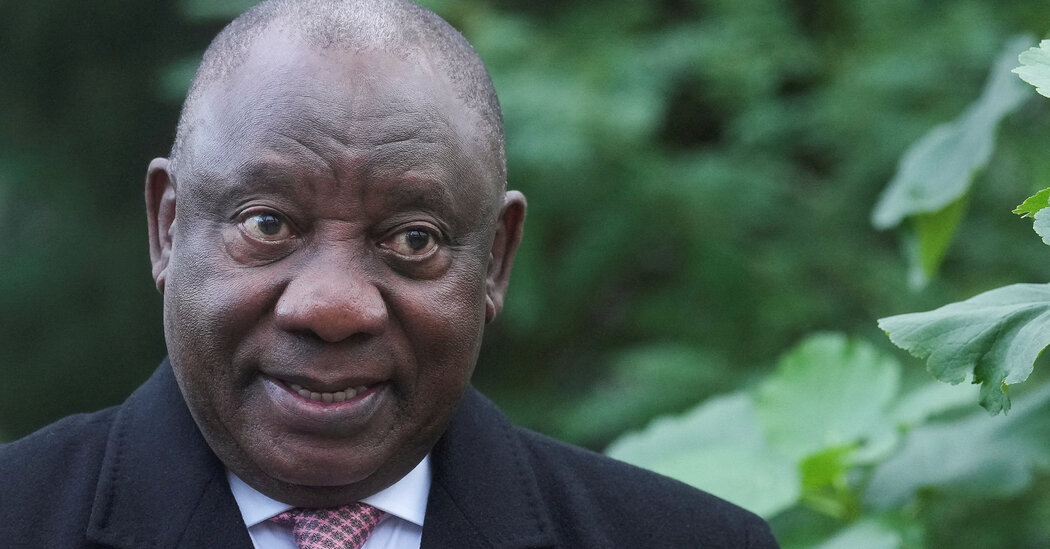 JOHANNESBURG — President Cyril Ramaphosa of South Africa said on Saturday that he would not resign and would instead challenge a parliamentary report that suggests he may have illegally covered up a crime at his private game farm, ending days of speculation that he might step down rather than face impeachment.

Mr. Ramaphosa’s spokesman, Vincent Magwenya, said in a statement that the president would heed the call of his supporters within the African National Congress and remain in office while continuing his effort to seek re-election as the party’s leader.

“The president has with humility and great care and commitment accepted that call to continue being of service to his organization, the A.N.C., and to the people of South Africa,” Mr. Magwenya said.

The decision by the president to stand his ground caps a roller coaster week, in which the report was released and Mr. Ramaphosa seemed to be leaning toward resigning. His closest advisers, however, encouraged him to fight back against the accusations that he violated his oath of office.

Mr. Ramaphosa has yet to emerge publicly since the report came out on Wednesday and his office said he would address the nation soon. He has previously denied any wrongdoing and has not been charged with a crime.

Now Mr. Ramaphosa, a billionaire investor who was among Nelson Mandela’s favorite allies and was once seen as a champion of good governance, will have to quickly recalibrate his campaign to win a second term as the A.N.C. leader. The party, which has been in power since the end of apartheid in 1994, is set to convene the conference where it chooses its leaders in Johannesburg in less than two weeks. Mr. Ramaphosa held a comfortable lead in the contest before the report’s release.

The report, drafted by two former judges and a lawyer, examined allegations that Mr. Ramaphosa tried to cover up the theft of a large sum of U.S. currency hidden in a sofa at a game farm he owns. The president denied any wrongdoing in the aftermath of the burglary in February 2020. He said that $580,000 that a Sudanese businessman had paid for 20 buffaloes was stolen, and he reported it to the head of the presidential protection service, assuming that a formal report would follow. He also argued that he did not draw any salary from the game farm, and that it was something that he ran as a passion.

But the panel said that Mr. Ramaphosa’s story had many gaps, and it cast doubt on whether the money stolen actually came from the sale of buffalo. The report said that the president may have violated the Constitution’s prohibition on public officials conducting private business, and that he also may have run afoul of anti-corruption laws that required him to report the theft to the police.

The president’s allies have openly rejected the report’s findings, saying that they were based on speculation and there was nothing conclusive to suggest that the president had done anything wrong. His legal team was busy this weekend preparing a brief requesting that a judge review the report and throw it out.

“It is in the long term interest and sustainability of our constitutional democracy and well beyond the Ramaphosa presidency that such a clearly flawed report is challenged,” Mr. Magwenya said.

Even as Mr. Ramaphosa vows to forge ahead, he still faces a precarious fate. A.N.C. leaders are scheduled to meet on Sunday and Monday to discuss the report and decide what stance the organization will take toward its leader. On Tuesday, Parliament is set to debate the report’s findings, and analysts say it is likely that lawmakers will vote to convene an impeachment hearing.

Mr. Ramaphosa would be removed from office if two-thirds of the members of Parliament, which is controlled by the A.N.C., vote against him. No South African president has faced an impeachment hearing — let alone been removed from office — since the country’s first democratic elections in 1994.

Although Mr. Ramaphosa may well survive the impeachment process, he carries a tarnished reputation that may hamper his efforts to retain leadership of his party and help the A.N.C. retain a national electoral majority in the next elections in 2024.

Mr. Ramaphosa came to power in the A.N.C. in 2017, and took over the presidency of the country the following year, after his predecessor, Jacob Zuma, was rocked by a wide range of corruption accusations.

Mr. Ramaphosa set out to clean up institutions seen as corrupt, including the national prosecutor’s office and the national revenue service. In October, he unveiled several measures to fight corruption based on recommendations by a judicial commission that conducted a three-year investigation into public corruption, in which 300 witnesses were interviewed.

Mr. Ramaphosa’s agenda at home and abroad endeared him to leaders around the world. He was sometimes unafraid to challenge what he perceived as the West’s paternalistic attitude toward Africa. He insisted Covid vaccines be manufactured on the continent, and that wealthy nations provide significant financial support for poorer countries to transition to cleaner energy sources.

Still, at home he has always faced stiff headwinds, especially within his factionalized political party. He will have to navigate those divisions if he wants to hold onto power at the conference, which analysts predict will produce a tight battle for the A.N.C.’s top spot.

A faction of the A.N.C. that consists of supporters of Mr. Zuma, the former president, have long argued that Mr. Ramaphosa has done little to carry out an agenda to help uplift the masses in a country where many people are unemployed and struggling to get by. They also have been skeptical of Mr. Ramaphosa’s anti-corruption agenda, accusing him of using it as a cover to sideline his detractors within the party.

But Mr. Ramaphosa’s allies see him as a bulwark against the corruption that has been so prevalent in the A.N.C., that it has led to a significant dip in the party’s electoral support. They say that if Mr. Ramaphosa resigns, those motivated by enriching themselves off state resources could take over the party.

One of the president’s supporters, Zamani Saul, the premier of the Northern Cape province, lauded Mr. Ramaphosa’s efforts to fight corruption, saying that he needed to win a second term “in order to complete his mission and put the country in the right direction.”

“Many people,” Mr. Saul added, “have got confidence in him.”