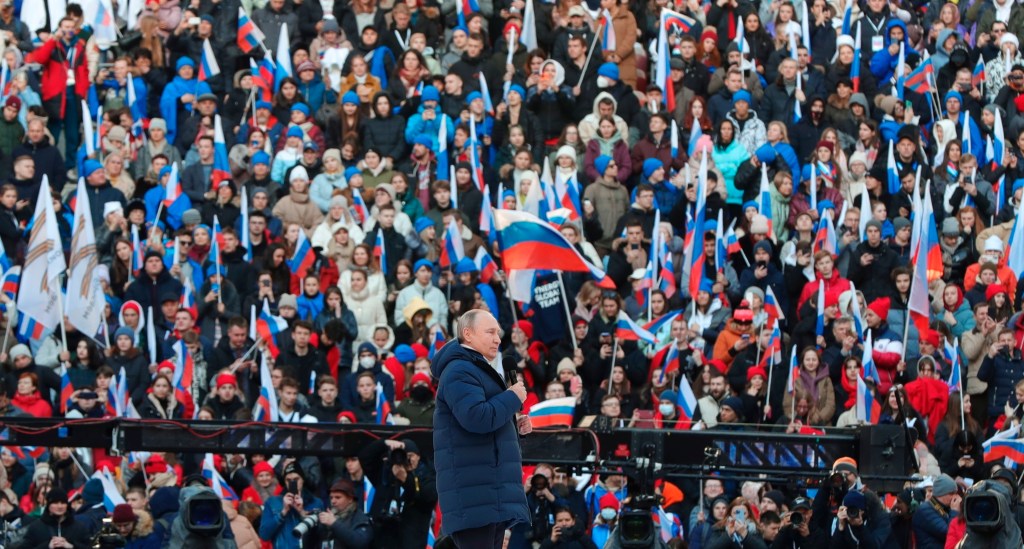 At about the same time that President Joe Biden was on the phone discussing Russia with China’s Xi Jinping, and as Russian troops pounded Ukrainian cities, Vladimir Putin gathered close to 200,000 Muscovites in a soccer stadium to put his spin on things.

It was billed as concert to mark the 8th anniversary of the referendum on Crimea’s so-called reunification with Russia, but it was also a chance for Putin to try and rally support for his war on Ukraine. But all did not go as planned.

Putin, standing on a stage with no one else near him, was about to wrap his speech when the TV feed jumped to a dolly shot swinging out over the crowd. Audio from Putin’s speech was suddenly replaced by music and cheering. You can see it below.

Here’s video of Putin suddenly vanishing mid-sentence. Where is he?! pic.twitter.com/c6VqE6GG3s

State-run RIA news said the Kremlin blamed “a technical failure on the server” for the interruption. According to Financial Times Moscow Bureau Chief Max Seddon, state-run TV quickly reran the entirety of Putin’s speech, glitch-free, including the ending.

It wasn’t the only technical huccup.

CNN’s Bianna Golodryga tweeted video of the sound cutting out during the speech of the Director of the Information and Press Department in Putin’s Ministry of Foreign Affairs, Maria Zakharova. Unlike her boss, it wasn’t just Zakharova’s audio that dropped out, all audio on the telecast went out, and for about 30 seconds there was silence as she mouthed words onscreen.

“Can’t think of a more effective way to showcase what things in a post-Western technology Russia will look like,” wrote Golodryga.

Oh man. So after Putin’s feed cuts out, so does Maria Zakharova’s mic.

Can’t think of a more effective way to showcase what things in a post-Western technology Russia will look like… https://t.co/RzX3APp1zJ