Putin tells Europe: Pay in roubles or we’ll cut off your gas – Reuters.com 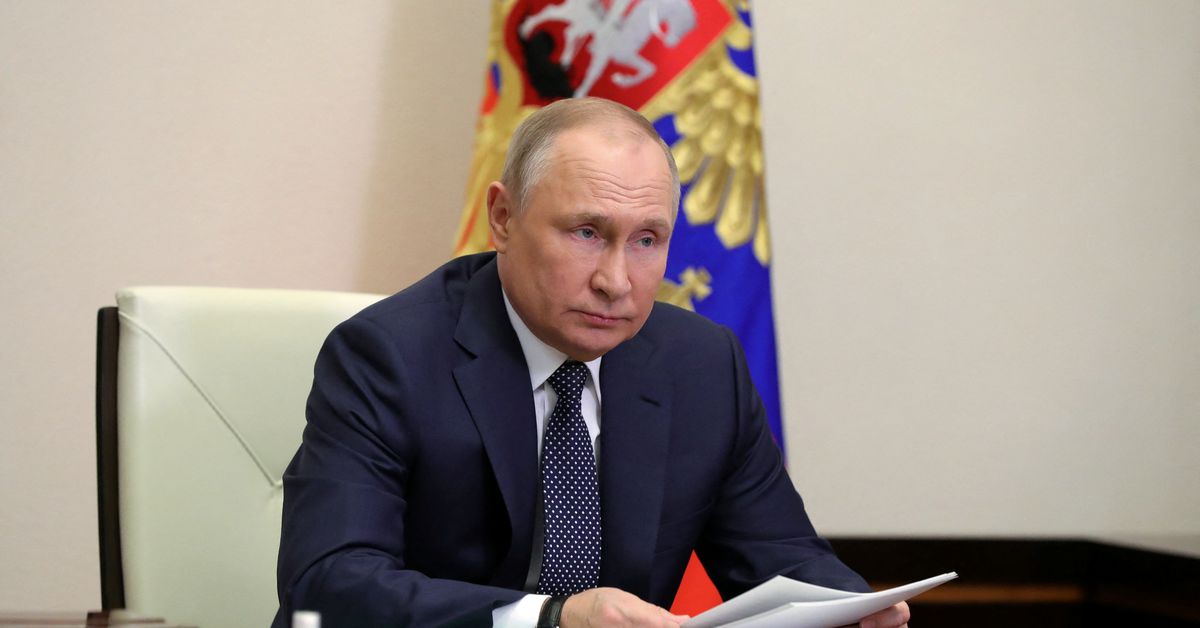 BERLIN/LONDON, March 31 (Reuters) – Russian President Vladimir Putin is demanding foreign buyers pay for Russian gas in roubles from Friday or else have their supplies cut, a move European capitals rejected and which Germany said amounted to “blackmail”.

Putin’s decree on Thursday leaves Europe facing the prospect of losing more than a third of its gas supply. Germany, the most heavily reliant on Russia, has already activated an emergency plan that could lead to rationing in Europe’s biggest economy.

Energy exports are Putin’s most powerful lever as he tries to hit back against sweeping Western sanctions imposed on Russian banks, companies, businessmen and associates of the Kremlin in response to Russia’s invasion of Ukraine. Moscow calls its Ukraine action a “special military operation”.

Putin said buyers of Russian gas “must open rouble accounts in Russian banks. It is from these accounts that payments will be made for gas delivered starting from tomorrow,” or April 1.

“If such payments are not made, we will consider this a default on the part of buyers, with all the ensuing consequences. Nobody sells us anything for free, and we are not going to do charity either – that is, existing contracts will be stopped,” he said in televised remarks.

It was not immediately clear whether in practice there might be a way for foreign firms to continue payment without using roubles, which the European Union and G7 have ruled out.

Italy said it was in contact with its European partners to give a firm response to Russia, adding its own gas reserves would allow economic activity to continue even in the event of disruptions. read more

Meantime, Germany’s energy firms said they were in close talks with Berlin about how to respond to possible supply disruptions and draw up a roadmap on what to do should Russia stop gas exports.

Under the mechanism decreed by Putin, foreign buyers would use special accounts at Gazprombank to pay for the gas. Gazprombank would buy roubles on behalf of the gas buyer and transfer roubles to another account, the order said. read more

A source told Reuters that payments for gas delivered in April on some contracts started in the second half of April and May for others, suggesting the taps might not be turned off immediately. read more

Putin’s decision to enforce rouble payments has boosted the Russian currency, which fell to historic lows after the Feb. 24 invasion. The rouble has since recovered much lost ground.

“What sounded grandiose has turned into a storm in a teacup. By making it the main recipient of money for gas, it puts an extra shield against sanctions around Gazprombank,” said Jack Sharples of the Oxford Institute for Energy Studies.

Western companies and governments have rejected any move to change their gas supply contracts to another payment currency. Most European buyers use euros. Executives say it would take months or longer to renegotiate terms.

Payment in roubles would also blunt the impact of Western curbs on Moscow’s access to its foreign exchange reserves.

Russian President Vladimir Putin chairs a meeting on the development of air transportation and aircraft manufacturing, via a video link at the Novo-Ogaryovo state residence outside Moscow, Russia March 31, 2022. Sputnik/Mikhail Klimentyev/Kremlin via REUTERS

Meanwhile, European states have been racing to secure alternative supplies, but with the global market already tight, they have few options. The United States has offered more of its liquefied natural gas (LNG) but not enough to replace Russia.

“It is important for us not to give a signal that we will be blackmailed by Putin,” Germany Economy Minister Robert Habeck said, adding that Russia had not been able to divide Europe.

Payments would continue to be made in euros, Germany said.

French economy minister Bruno Le Maire said France and Germany were preparing for the possibility of Russian gas flows being halted. He declined to comment on technical details linked to latest Russian demands for rouble payment.

Putin said the switch to roubles would strengthen Russia’s sovereignty. He said the West was using the financial system as a weapon, and it made no sense for Russia to trade in dollars and euros when assets in those currencies were being frozen.

“What is actually happening, what has already happened? We have supplied European consumers with our resources, in this case gas. They received it, paid us in euros, which they then froze themselves. In this regard, there is every reason to believe that we delivered part of the gas provided to Europe practically free of charge,” he said.

“That, of course, cannot continue,” Putin said, although he said Russia still valued its business reputation and would continue to meet obligations in its gas and other contracts.

European gas prices have rocketed higher on mounting tension with Russia raising the risk of recession. Companies, including makers of steel and chemicals, have been forced to curtail production. read more

British and Dutch gas prices , were up 4% to 5% after Putin’s announcement.

European companies had little or no immediate comment on the Russian announcement or on their contracts with Gazprom (GAZP.MM), which has a monopoly on Russian gas exports by pipeline.

Poland’s PGNiG (PGN.WA) said it remained in contact with Gazprom with which it has a long-term contract that expires at the end of this year, but it said it would not discuss details.

Italian energy firm Eni (ENI.MI), another major European buyer of Russian gas, also had no comment. It bought around 22.5 bcm of Russian gas in 2020. Its contracts with Gazprom expire in 2035.

Danish energy firm Orsted (ORSTED.CO), which has a long-term take-or-pay contract with Gazprom, said it was waiting to hear from the Russian firm and declined to comment further.