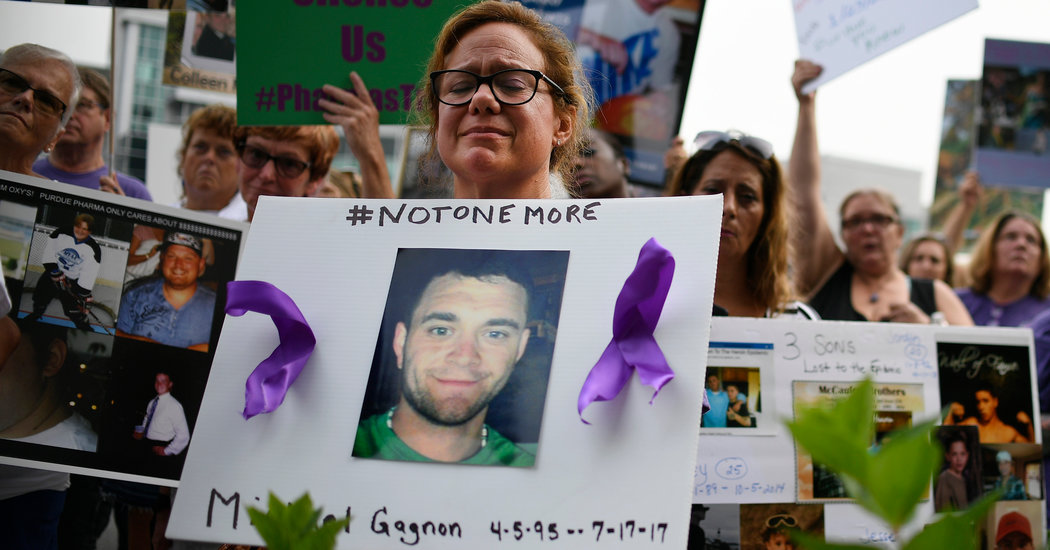 Emily Walden’s son T.J. was prescribed opioids throughout his childhood to help him recover from a series of operations. But he became addicted only once he started using OxyContin. He was a 21-year-old member of the Kentucky National Guard when he died of an opioid overdose four years later.

Ever since her son’s death, Ms. Walden has devoted herself to a singular mission: convincing the federal government to hold pharmaceutical executives personally responsible for their role in the nation’s opioid crisis. At the top of her list is the maker of OxyContin, Purdue Pharma, and the wealthy Sackler family that owns the company.

Yet Ms. Walden felt little relief when the Justice Department announced on Wednesday that Purdue would plead guilty to criminal charges as part of an $8.3 billion settlement, or that the Sacklers would pay $225 million in civil penalties. The company is in bankruptcy court, so it is unlikely to pay anything close to the negotiated settlement, and the Sacklers remain free.

“Purdue, once again, played the game and won,” said Ms. Walden, the chairwoman of The Fed Up! Coalition, an advocacy group.

More than 20 years after the introduction of OxyContin — and nearly 450,000 opioid overdose deaths later — Wednesday’s announcement brought little solace to the survivors of the opioid crisis and the families whose loved ones became its victims. Purdue agreed to plead guilty to felony charges of defrauding federal health agencies and violating anti-kickback laws.

The deal does not end thousands of lawsuits brought by states, cities and others against the most prominent defendant in the opioid epidemic.

In North Caldwell, N.J., Lora Goldwater recalled the agony of watching her son struggle with an opioid addiction that began with OxyContin in college, leading to heroin and seven stints in rehab before he became sober nearly four years ago.

“I’m lucky because my son did not die,” she said. “But between the ages of 18 and 25, he must have gone to at least half a dozen funerals, if not more, of people who did not make it to the other side.”

For Ms. Goldwater, the settlement is insufficient unless the Sacklers and Purdue executives face criminal charges, which prosecutors said could still happen. “They definitely engaged in criminal activity due to greed, insensitivity and because they felt they could get away with it.”

Jake Bradshaw was a 17-year-old high school student in rural Minford, Ohio, two decades ago when OxyContin pills began appearing at parties. Soon, what started as a weekend dalliance became an unrelenting dependence for Mr. Bradshaw and many of his classmates. They swallowed opiates before school, snorted painkillers in the bathrooms and crushed up pills with a baseball at the back of classrooms. “In a very short amount of time, 30 percent of my class was addicted to a hard opiate that’s pretty much like heroin,” he said. “And no one knew how to deal with it.”

Over the next decade, Scioto County, which includes Minford, would become ground zero in Ohio’s fight against opioids. It would lead the state with high rates of fatal drug overdoses, drug-related incarcerations and babies born with neonatal abstinence syndrome. Drug overdoses killed more Ohio residents in May than in any month in at least 14 years, according to state data, as drug abuse has increased amid the coronavirus pandemic.

“I’m a huge believer that if we had not seen OxyContin in this area, we would not have a heroin and fentanyl epidemic,” said Mr. Bradshaw, who was addicted to opioids for more than 10 years. While he was heartened by the news that Purdue would plead guilty to criminal charges, he questioned the tangible benefits of the deal for devastated communities. “Hopefully, it’ll bring some kind of closure to the families whose kids got addicted to OxyContin and now are dead,” he said.

One of Mr. Bradshaw’s former classmates, Ralph Boggs, 38, recounted how a doctor prescribed OxyContin to him in the early 2000s, a few years after he was seriously injured in a car crash. Soon, he was buying OxyContin at pill mills in the Midwest and Florida, where doctors took cash and asked no questions. “It was like walking in and out of a Family Dollar,” he said.

He ended his addiction during a seven-year prison sentence, but Mr. Boggs could not escape the destruction wrought by the opioid crisis. In March, his 18-year-old son, Ethan, fatally overdosed on fentanyl, shortly after his high school in Portsmouth, Ohio, closed amid the pandemic.

Mr. Boggs dismissed the $8.6 billion settlement as a slap on the wrist for causing so much grief to so many people. “We can’t get our loved ones back,” he said. “To me that’s not worth anything. You can’t write a dollar amount for that.”