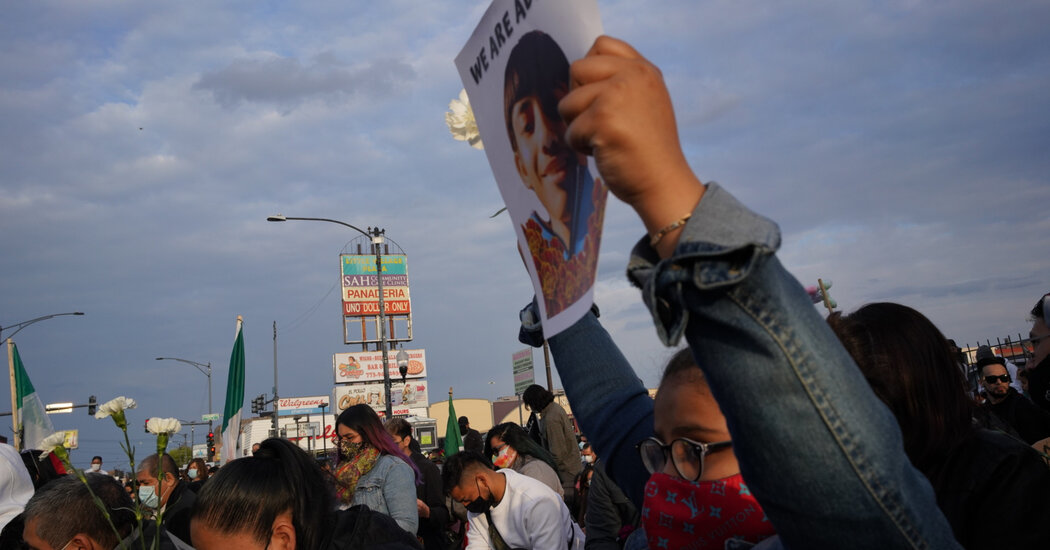 Prosecutors in Chicago said on Tuesday that they would not file charges against the officers who fatally shot 13-year-old Adam Toledo and 22-year-old Anthony Alvarez, killings that occurred two days apart in March 2021 and put a spotlight on the Police Department’s chase policy.

In announcing her decision, Kim Foxx, the state’s attorney for Cook County, said the officers, who in each case gave chase to an armed suspect, might have violated the department’s chase policy, but that the evidence did not support the filing of criminal charges.

“The case law that we rely on recognizes that police officers are often forced to make split-second decisions and judgments in circumstances that are tense, uncertain and rapidly evolving.”

Though Ms. Foxx’s announcement took criminal charges off the table, lawyers representing the families of the victims have sued the City of Chicago and the officers involved in the shootings. The officers could also face punishment from the department, Ms. Foxx said.

There have been several high-profile convictions of police officers in the past year, including of a former Minneapolis police officer who was convicted of murdering George Floyd and three more who were convicted of violating his rights.

Still, police officers are rarely charged with crimes for shooting people while on-duty, particularly in cases in which the people were armed, as were Adam and Mr. Alvarez.

Several fatal shootings by the police that led to protests in 2020 did not lead to convictions. Earlier this month, jurors acquitted the only Louisville, Ky., police officer who was charged for his actions during the fatal police raid on Breonna Taylor’s home, deciding that he was not guilty of endangering her neighbors when he fired into Ms. Taylor’s apartment.

In the early-morning hours of March 29, 2021, Officer Eric E. Stillman of the Chicago police and another officer were responding to reports of gunfire when they saw two people in an alley, including Adam, and started to chase them, officials said.

In a body-cam video, Officer Stillman yells at Adam to stop. “Stop right now!” the officer screams while cursing, telling the 13-year-old to drop his gun. “Hands. Show me your hands. Drop it. Drop it.”

What happened next unfolded “almost simultaneously,” in an estimated 838 milliseconds — less than a second — Ms. Foxx said. Adam turned his body toward Mr. Stillman with his left hand raised and discarded the gun he held in his right hand while the officer fired one shot, striking Adam in the chest.

Officer Stillman can be seen administering C.P.R. on Adam and telling him to “stay with me” as blood poured out of his mouth.

Two days later, two officers activated their car’s emergency lights when they saw Anthony Alvarez, a man they knew from previous encounters, Ms. Foxx said. The night before, she added, he fled as the officers tried to make a traffic stop.

Mr. Alvarez dropped the food and drink in his hands and began running, prompting Officer Evan Solano and his partner to chase him on foot down an alley and into a residential neighborhood, officials said. Mr. Alvarez had a gun in his right hand, Ms. Foxx said.

As Mr. Alvarez turned a corner, he slipped and fell to the ground twice, Ms. Foxx said, adding that as he tried to get up, Officer Solano arrived at the corner and believed — because he did not see him fall — that Mr. Alvarez was in a crouching position with a handgun waiting to ambush him. The officer drew his gun.

While Mr. Alvarez was running with the gun in his right hand, Officer Solano “fired five consecutive shots at Mr. Alvarez while veering to the left, away from Mr. Alvarez,” Ms. Foxx said, adding that the bullets struck him twice in the back and once in the left thigh.

Wounded and sprawled on the ground in front of a house, Mr. Alvarez moaned in pain and said, “Why are you shooting me?”

“You had a gun,” Officer Solano replied.

As in the Adam Toledo case, there was not enough evidence to support criminal charges, Ms. Foxx said, but the officer who shot Mr. Alvarez “created the conditions” under which the use of deadly force became necessary.

“It was unnecessary for the officers to stop and engage with Mr. Alvarez, who was walking through a gas station parking lot holding food and drink,” Ms. Foxx said. “He was not committing any crimes that were readily apparent to the officers at the time.”

Ms. Foxx also said that Officer Solano might have committed “several foot-pursuit policy violations during his pursuit of Mr. Alvarez, such as rounding corners blind without first slowing to assess any danger and not creating distance or waiting for his partner upon observing Mr. Alvarez with the firearm.”

Timothy Grace, a lawyer representing the officers in both cases, said late Tuesday that they were not guilty of any departmental violations. These cases should be judged “not by 20/20 hindsight” but rather by “what the police officers knew at the time.”

“These offenders simply had to listen to the commands of law enforcement and drop the guns, and they didn’t,” Mr. Grace said. “The officers were left with no choice but to defend themselves.”

Christopher Smith, a Chicago lawyer representing Mr. Alvarez’s family, said the officers involved in Mr. Alvarez’s death made decisions to “become the aggressors” and unnecessarily put everyone in a dangerous scenario.

“This wasn’t a situation that needed to be escalated,” Mr. Smith said. “Anthony Alvarez’s comment to the officer right after getting shot said it all. He asked him, ‘Why did you shoot me?’ It wasn’t a scenario where he was doing anything but trying to get away.”

A lawyer representing the family of Adam Toledo could not immediately be reached late Tuesday.

Officer Stillman is still on active duty, while Officer Solano has been relieved of police powers pending an internal investigation, said Thomas J. Ahern, a spokesman for the Chicago Police Department.