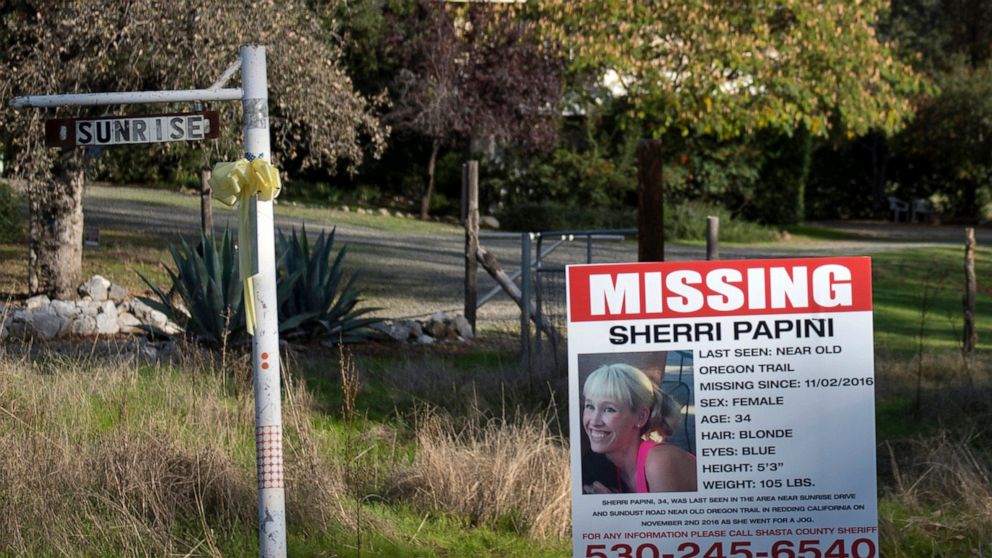 SACRAMENTO, Calif. — A Northern California woman whose disappearance and mysterious reappearance set off a frantic three-week search more than five years ago was arrested Thursday on charges of lying to federal agents about being kidnapped and defrauding the state’s victim compensation board of $30,000.

Sherri Papini, 39, of Redding, was found on Thanksgiving Day in 2016 after weeks of searching in California and several nearby states, with bindings on her body and injuries including a swollen nose and a “brand” on her right shoulder.

She had been reported missing Nov. 2. She told authorities at the time that she had been kidnapped at gunpoint by two Hispanic women, even providing descriptions to an FBI sketch artist along with extensive details of her purported abduction.

In reality, authorities said, she was staying with a former boyfriend nearly 600 miles (966 kilometers) away from her home in Orange County, in Southern California, and hurt herself to back up her false statements.

“When a young mother went missing in broad daylight, a community was filled with fear and concern,” U.S. Attorney Phillip Talbert said in a statement. “Ultimately, the investigation revealed that there was no kidnapping and that time and resources that could have been used to investigate actual crime, protect the community, and provide resources to victims were wasted.”

Papini does not yet have an attorney because she was just arrested, Talbert’s office said. Her first court appearance has not yet been set.

She was still lying about the kidnapping in August 2020 when she was interviewed by a federal agent and a Shasta County sheriff’s detective, the charges allege. They showed her evidence indicating she had not been abducted and warned her that it was a crime to lie to a federal agent.

But she still made false statements, the charges allege.

She also was reimbursed more than $30,000 by the California Victim’s Compensation Board based on the false story, the charges said. They included money for visits to her therapist for “treatment for anxiety and PTSD,” according to a court filing, and for the ambulance ride to the hospital after she surfaced near Sacramento.

She faces a mail fraud charge related to the reimbursement requests that carries a penalty of up to 20 years in prison, while lying to a federal officer has a maximum five-year sentence.

“Everyone involved in this investigation had one common goal: to find the truth about what happened on Nov. 2, 2016, with Sherri Papini and who was responsible,” said Shasta County Sheriff Michael Johnson.

That 22-day search and five-year investigation not only cost money and time, he said, “but caused the general public to be fearful of their own safety, a fear that they should not have had to endure.”

Before she disappeared, Papini had gone jogging near her home about 215 miles (350 kilometers) north of San Francisco. Her husband, Keith Papini, found only her cellphone and earphones when he went searching after she failed to pick up their children at day care. She left her purse and jewelry behind.

Investigators said he passed a lie detector test. They also cleared a Detroit man they said Papini had texted and planned to meet shortly before her disappearance. He was in California at the time of her disappearance but told investigators they never met, though they had spent a weekend together in 2011.

Papini’s nose was swollen and she was wearing a chain restraint around her waist and one arm along with other bindings around her other wrist and each ankle when she was found alongside Interstate 5 nearly 150 miles from her home, according to a court filing Thursday.

She had other bruises and rashes on many parts of her body, ligature marks on her wrists and ankles, and burns on her left forearm.

Her blonde hair had been cut to shoulder length and she had a blurred “brand” burned into her right shoulder, authorities said at the time.

She had both male and female DNA on her body and clothing. The DNA eventually led to the former boyfriend in 2020, according to a court filing.

The former boyfriend told investigators that Papini stayed with him at his house during the time she was gone, and said she had asked him to come to Redding to pick her up, though he said they never had sex.

His account was verified when authorities tracked the locations of two prepaid cellphones that they had been using to secretly talk to one another as early as December 2015, according to a 55-page affidavit filed in court to support the criminal charges.

A cousin of the former boyfriend told investigators that he saw Papini in the man’s apartment twice, both times unrestrained.

About three weeks later, records backed the ex-boyfriend’s story that he rented a car and drove Papini back to Northern California.

A GoFundMe campaign raised more than $49,000 to help the family, which the couple used to pay off bills and for other expenses, according to the court filing.

At the time, she was a stay-at-home mom and her husband worked at Best Buy. There was never a ransom demand, and the family wasn’t wealthy, officials said at the time.

In retrospect, “we are relieved that the community is not endangered by unknown, violent kidnappers,” said Sean Ragan, special agent in charge of the FBI’s Sacramento Field Office.