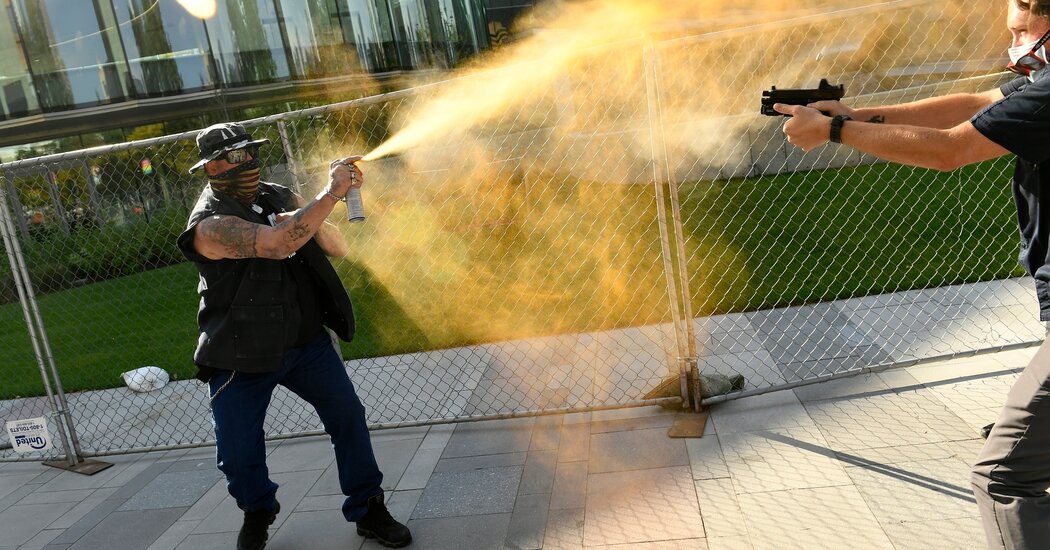 Prosecutors said on Thursday that they planned to drop a second-degree murder charge against a former security guard for a Denver television news station who fatally shot a man in a confrontation after a right-wing rally in 2020.

A spokeswoman for the Denver district attorney’s office said that prosecutors were not able to overcome claims by the former guard, Matthew Dolloff, that he had acted in “self-defense or defense of others” when he shot Lee John Keltner, 49, at the conclusion of a “patriot muster” rally on Oct. 10, 2020.

Mr. Dolloff had argued that he was defending himself and a reporter for 9News, a Denver news channel, which said that it had hired him as a private security guard.

“Having fully considered the facts and circumstances surrounding the charges, today we informed Lee Keltner’s family members that we will soon dismiss the criminal case against Matthew Dolloff,” the spokeswoman for the district attorney’s office, Carolyn A. Tyler, said in a statement.

“In line with our ethical obligations, we cannot overcome the legal justifications of self-defense or defense of others,” she said. “We are not able to prove guilt beyond a reasonable doubt.”

Mr. Dolloff did not face any other charges in the case, according to his lawyer, Doug Richards.

“I am very pleased that the D.A. has finally recognized what we have known all along: that Matt was clearly defending himself and the 9News reporter,” Mr. Richards said in an interview.

The Denver news channel said on the afternoon of the protest that Mr. Dolloff had been hired as a private security guard and that it had been “the practice of 9News for a number of months to hire private security to protect staff at protests.”

A lawyer who has represented Mr. Keltner’s family did not immediately respond to an email and a phone call on Thursday night.

The shooting happened as protesters left the rally and encountered left-wing counterprotesters south of Civic Center Park, near the Denver Art Museum.

According to an arrest warrant, Mr. Keltner had been arguing with another man near the park.

Mr. Keltner abruptly broke off that argument and confronted Mr. Dolloff. Moments later, Mr. Keltner struck Mr. Dolloff on the side of the head with his hand. Mr. Dolloff drew a gun from his waistband, aimed and fired a single shot as Mr. Keltner discharged a Mace-like substance, the police said.

The fatal encounter was captured in videos and photographs that circulated widely in news reports and on social media.

Mr. Keltner was taken to Denver Health Medical Center, where he was pronounced dead, the police said. The medical examiner ruled Mr. Keltner’s death a homicide, according to the district attorney’s office, which charged Mr. Dolloff with second-degree murder in October 2020.

Mr. Dolloff, 32, had pleaded not guilty during an arraignment last year, and his case was set to go trial on April 12, Mr. Richards said. If convicted, he would have faced a mandatory prison sentence of between 16 and 48 years, prosecutors said. Mr. Richards said that prosecutors planned to formally dismiss the case on March 21.