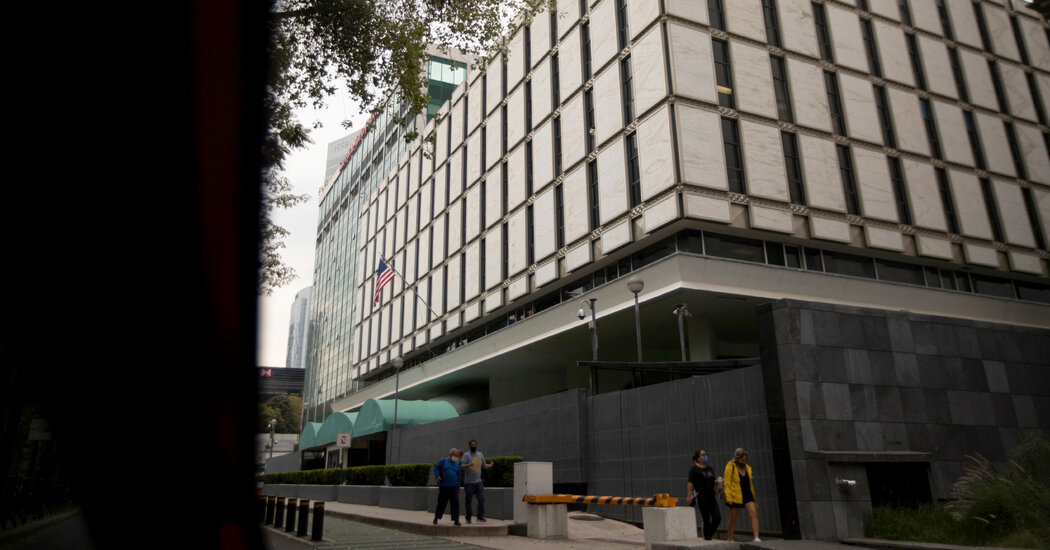 A former employee at the U.S. Embassy in Mexico, described by prosecutors as an “experienced sexual predator,” was arrested in San Diego this month and charged with videotaping and photographing a woman while she was partially naked and unconscious.

The former employee, Brian Jeffrey Raymond, was charged with one count of coercion and enticement of the woman, who prosecutors said he had met on Tinder in Virginia in 2017. If convicted, he could face up to 20 years in prison.

But prosecutors said the government’s investigation, which turned up hundreds of photos, videos and online chats, had revealed at least 21 additional victims dating back to at least 2011 whose cases could lead to additional charges.

The State Department on Thursday referred questions to the Justice Department, which said it could confirm only that Mr. Raymond had been a federal employee and is no longer working in Mexico. Court documents said he had traveled and worked in numerous countries and had extensive experience living abroad. He speaks both Spanish and Chinese.

Roberto Velasco Álvarez, director general of public affairs for Mexico’s Foreign Ministry, said on Twitter on Thursday that the Mexican authorities had cooperated with American law enforcement in the operation that led to Mr. Raymond’s arrest. He said that Mr. Raymond had been the first secretary at the U.S. Embassy and that the investigation involved potential sexual abuse in both countries.

The State Department and the F.B.I. began investigating Mr. Raymond in May, after the police in Mexico City responded to his embassy-leased apartment for a report of “a naked, hysterical woman desperately screaming for help” from the balcony, prosecutors said.

The Diplomatic Security Service reported that the woman was “physically unstable and required assistance to walk, appeared heavily intoxicated,” and was seen crying in the back of an ambulance, prosecutors said.

After the encounter, Mr. Raymond returned to the United States, where he told American investigators that he had sexual intercourse with the woman, but said it was consensual, according to prosecutors.

Federal agents arrested Mr. Raymond on Oct. 9 in San Diego and charged him in connection with the earlier encounter in Virginia in 2017. In that encounter, prosecutors said, Mr. Raymond met a woman on Tinder and then photographed and videotaped her while she was lying on her bed, unconscious and partially naked.

The woman later told the authorities that she had felt “woozy” and that her legs had given out after Mr. Raymond had refilled her wine glass. The last thing she remembered, she said, was telling Mr. Raymond that she was not feeling well and needed to lie down.

The woman said she had not consented to having her clothing removed or being photographed.

Prosecutors said searches of Mr. Raymond’s phones and his iCloud account had uncovered approximately 400 photographs and videos, as well as dozens of chats he had with women online.

Mr. Raymond “is an experienced sexual predator who poses a substantial threat to women in the community,” prosecutors wrote in court documents.

Three lawyers listed for Mr. Raymond in court records did not immediately respond to requests for comment late Thursday night. One of them, John David Kirby, said in court documents that before Mr. Raymond was charged, he had an “unblemished” 23-year career in public service for the federal government.

In a petition arguing that Mr. Raymond should not be held in custody, Mr. Kirby said that Mr. Raymond had taken more than 10 polygraph tests and had passed every one of them, including a recent one, which addressed the allegations against him.

Mr. Kirby said Mr. Raymond had deep ties to San Diego, where both of his parents, and his only sibling, live. He also owns a rental property in Las Vegas.

Linda Lopez, a federal magistrate judge in U.S. District Court for the Southern District of California, said this month that Mr. Raymond was a “danger to the community and a flight risk” and ordered that he be held in custody, pending trial.

She said that prosecutors had presented evidence that he had continued to meet women, even though he knew he was under investigation. One of those women told investigators that she had sex with Mr. Raymond after going on several dates with him in September, during which she became “very intoxicated.”

“From all outward appearances he has led an exemplary life,” Judge Lopez wrote. But the allegations that he photographed women while they were unconscious, she said, suggests he had a “unique ability to portray a very different public face.”