Pressure on Justice Dept. as Jan. 6 Panel Lays Out Case Against Trump 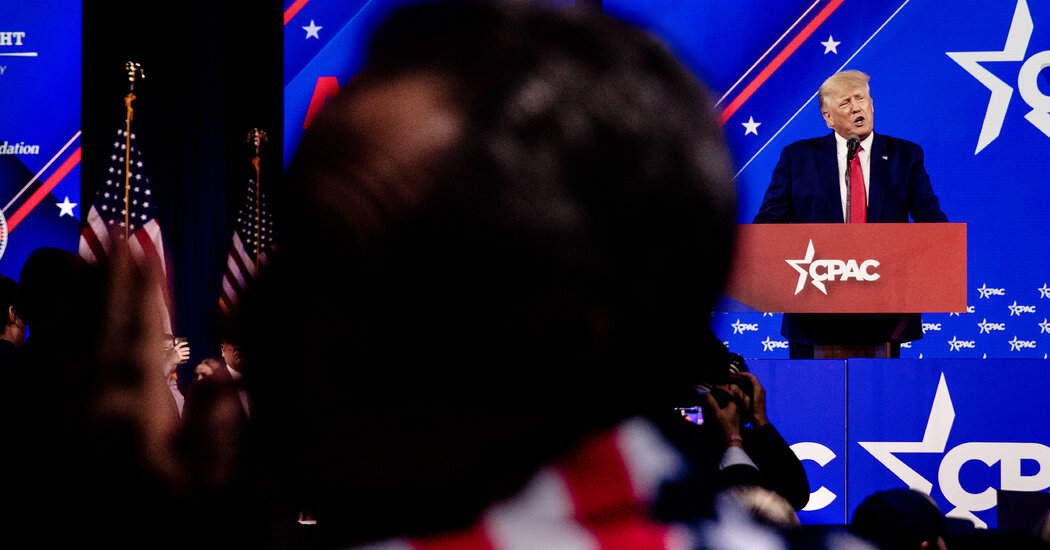 WASHINGTON — The Justice Department is facing mounting pressure to prosecute former President Donald J. Trump after the House committee investigating the Jan. 6 attack laid out its argument for a potential criminal case on Wednesday night, placing Attorney General Merrick B. Garland squarely in the middle of a politically charged debate over how to hold Mr. Trump accountable for efforts to overturn the election.

Even as Democrats have criticized Mr. Garland for remaining silent on Mr. Trump’s actions, he has sought to insulate the agency from politicization, an effort he sees as a corrective to Mr. Trump’s pressure campaigns to force the department to bend to his agenda.

Building a criminal case against Mr. Trump is very difficult for federal prosecutors, experts say, given the high burden of proof they must show, questions about Mr. Trump’s mental state and the likelihood of any decision being appealed, underlining the dilemma confronting the agency.

The department has never said whether it is exploring a criminal prosecution of Mr. Trump, though Mr. Garland has vowed to pursue wrongdoing “at any level,” keeping alive the possibility that federal prosecutors might someday charge the former president.

“The Justice Department will have to ask that question: Is there a winning case here?” said Norm Eisen, a Brookings Institution fellow who served as special counsel to the House Judiciary Committee during the first impeachment of Mr. Trump. “If there is strong evidence, but prosecutors don’t think they can secure a conviction, they will have to use prosecutorial discretion.”

That said, Mr. Eisen said the evidence that the committee produced in support of its argument could be powerful, and “support the idea that Trump and those around him are at risk of federal or state prosecution.”

It was far easier for the committee to claim that Mr. Trump had committed a crime in the context of the court fight that prompted it — a dispute over a subpoena for documents written by a lawyer — than it would be for prosecutors to win a criminal conviction over the same facts, legal specialists said.

The filing on Wednesday, which said that the committee had evidence to suggest that Mr. Trump might have engaged in a criminal conspiracy, is the work of three veteran Justice Department lawyers who would be deeply familiar with the complications that such allegations create for the agency.

Losing such a case has far-reaching implications. It risks severely undermining the department’s credibility, empowering and emboldening Mr. Trump and his allies, and making it harder for the federal courts to hold future presidents accountable for misdeeds.

In publicly sharing its work, the committee has only escalated expectations that Mr. Trump will be prosecuted, regardless of whether its evidence meets the standard that a federal prosecutor must clear to secure a unanimous guilty verdict.

In its court filing, the panel suggested it had evidence to support allegations that Mr. Trump committed two crimes: obstructing an official proceeding by working to disrupt the electoral vote count and conspiring with his allies, including the conservative lawyer John Eastman, to defraud the United States by working to overturn the election results.

“The evidence supports an inference” that Mr. Trump, Mr. Eastman and several others “entered into an agreement to defraud the United States by interfering with the election certification process, disseminating false information about election fraud, and pressuring state officials to alter state election results and federal officials to assist in that effort,” the filing said.

However, the filing was not necessarily a path to prosecution. The committee made its claim in the context of the court fight that prompted it — a dispute over a subpoena for documents written by Mr. Eastman. The standard it must meet to invoke crimes is much lower than it would be for prosecutors to win a criminal conviction, legal specialists said.

Specifically, Mr. Eastman has invoked attorney-client privilege to block the subpoena, and the committee wants a judge to enforce it anyway under an exception for materials that involve crimes or fraud.

It is asking the judge to view the disputed materials privately, and to do so it need only convince the court that it has a “good faith” reason to believe that such a private viewing “may reveal” evidence that the exception applies — a far lower bar than proving something to a jury beyond a reasonable doubt.

The central theory put forward by the Jan. 6 committee is that Mr. Trump tried to disrupt an official proceeding — Congress’s certification of the election results — by pressuring Vice President Mike Pence to illegally reject the electoral votes from certain states.

Samuel Buell, a Duke University law professor and former federal prosecutor, said that while the facts of what happened were largely clear, the challenge to convicting Mr. Trump would center on proving that he had a corrupt intent — essentially, that Mr. Trump knew that there was no valid lawful basis for Mr. Pence to do what he was demanding.

At a trial, Mr. Trump’s defense team would have a powerful argument about his mental state: Even though government lawyers told him that Mr. Pence did not have that authority, Mr. Eastman told him that the vice president could lawfully do what he wanted. The defense could say this shows that Mr. Trump sincerely thought he was asking Mr. Pence to do something lawful — raising a possible reasonable doubt in jurors’ minds about whether his intentions were corrupt.

Mr. Buell said that in an ordinary white-collar criminal case, it is not uncommon for corporate defendants to point to something their lawyers had said to maintain that they did not think they were doing anything criminal. Prosecutors sometimes go forward with such cases anyway, he said, knowing it will be an argument in trial they will need to try to defeat.

But the “enormous political implications” of charging the immediate past president — and possible 2024 election contender — make that calculus all the more risky for Mr. Garland, he said.

Federal charges against a former president would be a first in American history. While President Richard M. Nixon resigned in 1974 to avoid being impeached, President Gerald R. Ford pardoned him, absolving him of any criminal charges and sparing the Justice Department from prosecuting him.

A case against a former president would always be mired in politics, a dynamic especially true now given how deeply polarized the nation has become.

If the Justice Department were to criminally charge Mr. Trump, his supporters would most likely interpret it as President Biden’s handpicked attorney general deploying the department to attack the de facto leader of a rival party — particularly if they believe Mr. Trump’s lies that the 2020 election was stolen.

Should the Justice Department not bring charges, Mr. Trump’s opponents could feel that it had blatantly abdicated its duties. After the election, Mr. Trump continued to declare himself the winner, denying evidence compiled by his own administration. He pressured public officials to support his false claims, and he exhorted his followers to stop the peaceful transfer of power on Jan. 6.

If the Justice Department does not respond to such overt acts, it risks fostering the idea that presidents and their allies cannot be held accountable for behavior that undermines democracy.

“Here, it’s a totally different situation because there is an enormous political envelope around whether you would charge this guy,” Mr. Buell said. “At some level you can’t analyze this in terms of what a prosecutor would normally do.”