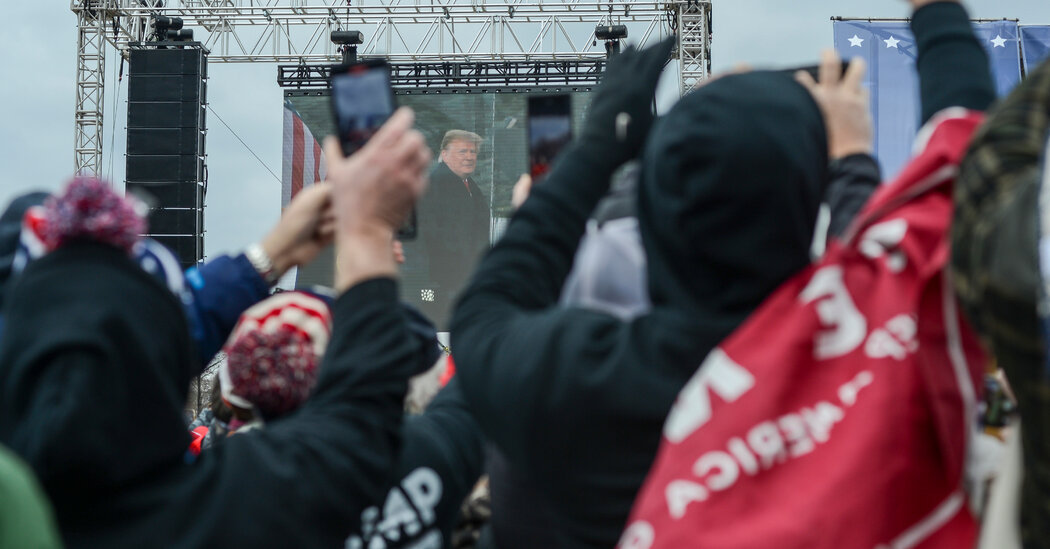 WASHINGTON — The House committee investigating the Jan. 6 attack on the Capitol on Tuesday laid out its theory for potential criminal charges against former President Donald J. Trump, arguing before a federal judge that he and the conservative lawyer John C. Eastman were involved in a conspiracy to perpetrate a fraud on the American public as part of a plan to overturn the 2020 election.

The allegations, which the committee first leveled against the men last week in response to a lawsuit filed by Mr. Eastman, could determine just how deeply the panel can dig into emails, correspondence and other documents of lawyers close to Mr. Trump who have argued that such material should be shielded from scrutiny because of attorney-client privilege.

They also form the core of the panel’s strategy for potentially holding Mr. Trump and his allies criminally liable for what happened on Jan. 6, 2021, one that turns on the notion that they knowingly sought to invalidate legitimate election results.

“We’re talking about an insurrection that sadly came very close to succeeding to overturn a presidential election,” Douglas N. Letter, the general counsel of the House, told Judge David O. Carter of the United States District Court for the Central District of California, during arguments in Mr. Eastman’s case.

The House committee’s argument is a risky one. If Judge Carter were to reject its claims, the inquiry’s legal team would be less likely to win support for a criminal prosecution unless investigators unearthed new evidence.

In court on Tuesday, Mr. Letter repeatedly chastised Mr. Eastman for writing a memo that some in both parties have likened to a blueprint for a coup. The document encouraged Vice President Mike Pence to reject electoral votes from swing states won by President Biden, even as Mr. Eastman conceded that the maneuver was likely illegal.

“Violate the law — and let them sue,” Mr. Letter said, characterizing Mr. Eastman’s counsel. “Boy, that’s not legal advice that I’ve ever given.”

The committee in recent weeks has issued subpoenas to lawyers, including Rudolph W. Giuliani and Sidney Powell, who worked closely with Mr. Trump as they pursued various efforts to keep the former president in power despite losing the election. They offered up false slates of electors claiming Mr. Trump had won politically competitive states that he had lost, and explored the seizure of voting machines.

Among them was Mr. Eastman, whom the committee says could potentially be charged with criminal violations including obstructing an official proceeding of Congress and conspiracy to defraud the American people.

Charles Burnham, Mr. Eastman’s lawyer, said the committee’s accusations against the former president are “groundbreaking criminal allegations,” but he argued that both Mr. Eastman and Mr. Trump genuinely believed the claims of a stolen election — despite being told repeatedly that such statements were false.

“Dr. Eastman and others absolutely believed that what they were doing was well-grounded in law and fact, and was necessary for what they believed was the best interest of the country,” Mr. Burnham said.

In a filing in Mr. Eastman’s case last week, the committee first revealed the basis of what its investigators believe could be a criminal referral to the Justice Department against Mr. Trump. Central to the case is the argument that, in repeatedly rejecting the truth that he had lost the 2020 election — including the assertions of his own campaign aides, White House lawyers, two successive attorneys general and federal investigators — Mr. Trump was not just being stubborn or ignorant, he was knowingly perpetrating a fraud on the United States.

The panel turned over to the court hundreds of pages of arguments, exhibits and court transcripts from Trump advisers telling him there was no widespread fraud in the 2020 election. But Mr. Burnham also said that Mr. Trump was given conflicting legal advice.

“Multiple presidential advisers were counseling the president that there were issues with the 2020 election — fraud, illegality, and so forth,” he said.

Mr. Burnham cited a book recently published by former Attorney General William P. Barr, who recounted how he tried to break through to Mr. Trump to tell him his wild fantasies about election fraud weren’t true, even as others informed the president he was right.

“After the election,” Mr. Barr wrote, “he was beyond restraint. He would only listen to a few sycophants who told him what he wanted to hear. Reasoning with him was hopeless.”

The arguments in court were prompted by Mr. Eastman’s attempt to shield from release documents he said were covered by attorney-client privilege. The committee responded that under the legal theory known as the crime-fraud exception, the privilege does not cover information conveyed from a client to a lawyer if it was part of furthering or concealing a crime.

Mr. Burnham tried to shoot down that argument Tuesday, telling the judge that there was no overt evidence of a crime or a conspiracy to commit one.

But Mr. Letter noted that Mr. Eastman had acknowledged in an email obtained by the House committee that he was encouraging Mr. Pence to break federal law in rejecting legitimate electors for Mr. Biden — something he referred to as a “relatively minor violation.”

“He wanted the vice president to do something that was plainly against the Constitution,” Mr. Letter said, adding sarcastically, “It would have been so minor, it could have changed the entire course of our democracy.”

At one point, Judge Carter focused on part of Mr. Eastman’s memo in which he encouraged Mr. Pence to reject electors “without asking for permission.”

Mr. Letter said that part of the memo was further acknowledgment that the Trump campaign was trying to hold onto power through any means necessary.

“It shows that what Dr. Eastman was proposing was: Do this — and basically damn the consequences,” he said.

The judge did not give an immediate indication of how quickly he might rule.