President Biden Makes the Case for Infrastructure in Bipartisan Meeting 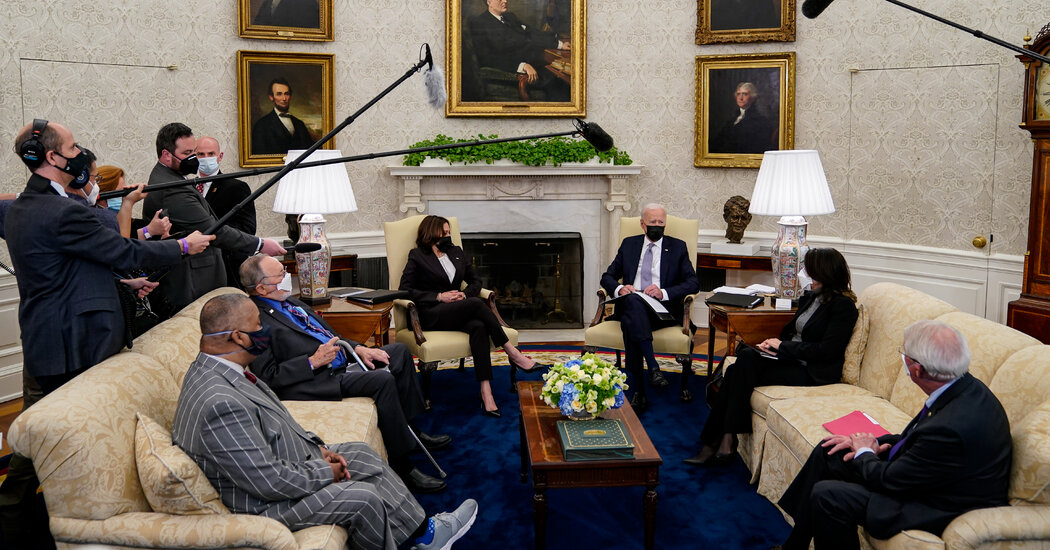 WASHINGTON — Facing opposition from Republicans and some centrist Democrats to parts of his $2 trillion infrastructure proposal, President Biden on Monday convened a bipartisan group of lawmakers at the White House, hoping to make progress toward a deal that can pass a bitterly divided Congress.

Sitting in the Oval Office with the group, Mr. Biden said he was “prepared to negotiate as to the extent of the infrastructure project, as well as how we pay for it.”

The meeting was an effort by the White House to show that it was willing to at least consider proposals to scale back or reshape the package and listen to alternatives to its own plan to pay for it by raising taxes on corporations.

The president has repeatedly said that it is his preference to pass a bipartisan deal. But White House officials and other Democrats have also made clear that they would be willing, if necessary to achieve their priorities, to push through a bill on a party-line vote over the objections of Republicans.

The group of lawmakers who visited the White House included four Democrats: Senators Maria Cantwell of Washington and Alex Padilla of California, and Representatives Donald M. Payne Jr. of New Jersey and David E. Price of North Carolina. Also in attendance were four Republicans: Senators Deb Fischer of Nebraska and Roger Wicker of Mississippi, and Representatives Garret Graves of Louisiana and Don Young of Alaska.

Despite Republican opposition to a broad bill, Mr. Biden repeatedly emphasized the need to look beyond simply repairing roads and bridges and pass a package that can improve the productivity of a 21st-century economy, according to those in attendance.

Discussing access to water and broadband as necessary infrastructure improvements to keep the United States competitive, he said, “I’m confident that everything is going to work out for us,” eliciting some laughter from the room.

The president made a strong case, Mr. Padilla said, adding, “This is really about our competitiveness as a nation in the future.”

The Republicans in the room expressed concerns about Mr. Biden’s broader definition of infrastructure — which includes funds for highways and bridges but also measures like research and development and worker training — and questioned the president’s plans to pay for his proposals, Mr. Padilla said. But they did not rule out future negotiations.

Mr. Padilla said the Republicans seemed open to including broadband funding in the package.

Mr. Price, the top Democrat on the House Appropriations subcommittee that oversees annual funding for transportation and housing, described the nearly two-hour meeting as “a good, honest exchange of initial views.”

Mr. Price had raised the importance of addressing housing and transportation improvements and said the group discussed how to pay for such investments. Paying for infrastructure, he noted, has been “the bugaboo of this discussion for 10 years or more.”

The purpose of the meeting was not to discuss the fine details of the plan, Mr. Price said, but instead to allow Mr. Biden, Vice President Kamala Harris and other top White House officials to listen to input from Capitol Hill.

“He left no doubt that this was an extremely high priority for him, and he was open to discussion and alternative ideas,” Mr. Price said. “But bottom line, he thinks we simply must do this.”

Mr. Wicker told reporters on Capitol Hill that “it would be an almost impossible sell from the president to come to a bipartisan agreement that included the undoing” of elements of the 2017 tax overhaul, which authorized permanent tax cuts for corporations while providing temporary cuts for individual taxpayers. Mr. Biden’s infrastructure plan would increase the corporate tax rate to 28 percent from 21 percent while also seeking to raise more revenue from international operations of big companies.

But Mr. Wicker said the president was engaged in the discussion, along with key members of his staff.

“Whether we’ll be able to come to a bipartisan agreement that gets as expansive and as massive as he would like to, I don’t know,” he added.

But even as a group of them agreed to visit the White House, some Republicans remained skeptical that the administration was engaging in good-faith negotiations, particularly after efforts to lower the scope and price tag of Mr. Biden’s nearly $1.9 trillion pandemic relief package were quickly rejected and the White House pushed through that legislation without a single Republican vote.

Jen Psaki, the White House press secretary, said on Monday that the president was “absolutely” willing to negotiate not only a funding mechanism for the bill but also its size and scope. When asked whether Republicans should be skeptical of his desire for bipartisan support, given his stated willingness to pass the bill through the budgetary process of reconciliation if he did not get it, Ms. Psaki pointed to his investment in the outreach.

“You don’t use the president’s time multiple times over, including bipartisan meetings we’ve already had, or the meeting today, if you do not want to authentically hear from the members attending about their ideas,” Ms. Psaki said.

Senator Mitch McConnell of Kentucky, the Republican leader, said Mr. Biden and his allies had assembled a “motley assortment of the left’s priciest priorities” under the “supposed veil of infrastructure.”

Democrats, he said, were “embarking on an Orwellian campaign to convince everybody that any government policy whatsoever can be labeled infrastructure. Liberals just have to believe in it hard enough.”

The president has been solicitous of Republican input, but his administration has also made clear that it does not want negotiations to drag on. Senator Chuck Schumer of New York, the majority leader, is considering using the fast-track budget reconciliation process for a second time this fiscal year, potentially allowing Democrats to pass Mr. Biden’s infrastructure plan or other policy priorities with a simple majority by relying on Ms. Harris’s vote as president of the Senate to break the 50-50 partisan split in the chamber.