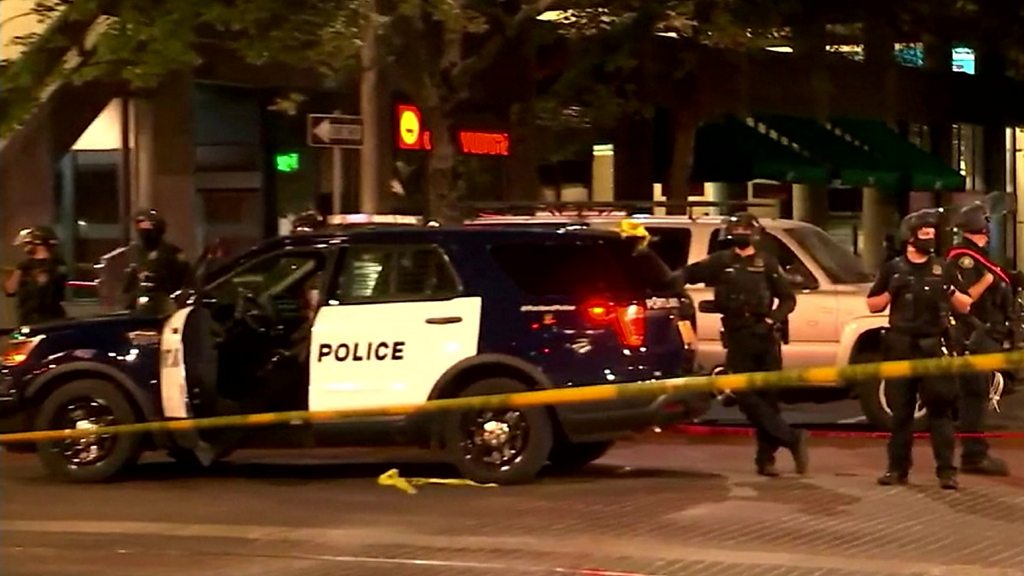 Acting US Homeland Security Secretary Chad Wolf has said Democrat officials in Portland have allowed “lawlessness and chaos” to develop after protests in the Oregon city turned violent.

“We’ve been asking Portland to do their job really for over three months now,” Mr Wolf told CBS News on Sunday.

He said federal forces, withdrawn in July, could return to the city.

A man was shot dead in Portland on Saturday as a pro-Trump rally clashed with Black Lives Matter protesters.

The streets of Portland have been the scene of frequent protests in recent weeks.

The city has become a focus for demonstrations against police brutality and racism since the police killing of African-American George Floyd in Minneapolis on 25 May triggered a wave of national and international outrage.

What has Chad Wolf said about the protests?

In an interview with CBS News’ Face the Nation, Mr Wolf said Oregon state officials had “failed to protect their communities” and he urged local politicians to help rein in the violence.

“What we’ve seen in Portland is almost three months, three months of allowing individuals to come in night after night and set fire to government buildings with little to no consequences.

“We’ve been asking the governor and others to send in the National Guard to address the violence so that you don’t have duelling demonstrations,” he said.

“We need them to step up and if they can’t or they don’t have the ability or resources, [to] ask the federal government.”

Mr Wolf referenced the recent clashes in Kenosha, Wisconsin, in the wake of the shooting by police of Jacob Blake. Wisconsin Governor Tony Evers said last week that he was sending more National Guard troops to the city amid the unrest.

“We will provide those resources as we have done in Wisconsin and others so we can address any violence,” Mr Wolf added.

Meanwhile, Democrats on Sunday condemned the violence linked to the street protests, while blaming President Trump for the unrest.

Minnesota Senator Amy Klobuchar said: “It is happening under Donald Trump’s watch… We are not safe in [his] America”.

Cedric Richmond, a Louisiana congressman and campaign co-chairman for Democratic presidential candidate Joe Biden, said: “[Trump] keeps talking about what Biden’s America would look like. Well, this is Trump’s America.”

What is known about the Portland shooting?

The latest pro-Trump rally was on the third Saturday in a row.

“Portland Police officers heard sounds of gunfire from the area of Southeast 3rd Avenue and Southwest Alder Street. They responded and located a victim with a gunshot wound to the chest,” Portland police said in a statement.

Oregon Live reported that “camouflage gear” with “thin blue line patches” was seen next to the body – a common sign of support for the police.

Images from the scene showed medics trying to save the man, who appeared to be white.

Another image shows police trying to restrain a man who was apparently with the person who was shot.

Police have not given an identity or specified whether the shooting was directly linked to the clashes which broke out in a downtown area.

On Sunday, Patriot Prayer founder Joey Gibson said the victim was “a good friend and a supporter” of the group, the Associated Press news agency reports.

The continuing violence on US streets brings into focus the evolving tone of Donald Trump’s election campaign – criticising cities run by Democrats, where much of the trouble has occurred, and framing himself as the law and order president.

Portland has been the epicentre of Black Lives Matter protests ever since the police killing of George Floyd, but the convergence of pro-Trump supporters, in large numbers, with anti-racism demonstrators marks a volatile escalation.

Tweeting “LAW & ORDER!!!” hours after the latest disturbances, Mr Trump makes it clear that the issue will dominate his appeal to the American people for a second term in office.

This could be a pivotal week. On Tuesday the president will head to Kenosha, in the political swing state of Wisconsin, where violent protests followed the police shooting of Jacob Blake. The stated reason is for Mr Trump to meet local police and “survey damage from recent riots”.

Many Americans will be watching to see if the president also reaches out to Mr Blake and his family and for any expressions of empathy for those who’re angry about police brutality.

What was the background to the shooting?

The shooting came amid fights between the Trump supporters and BLM protesters in the city centre.

Tension rose after a convoy of some 600 vehicles flying flags and carrying an estimated 1,000 Trump backers gathered at a mall in Clackamas county on the outskirts before entering Portland’s downtown.

Video showed some people firing what local media described as pepper spray and pellets at BLM groups who had tried to prevent them entering the city by blocking streets.

Police reported “some instances of violence” between “demonstrators and counter-demonstrators” and said some arrests had been made.

Accepting the nomination in a speech on the White House lawn, he sought to characterise Portland as another Democratic-run city prey to “rioting, looting, arson and violence”.