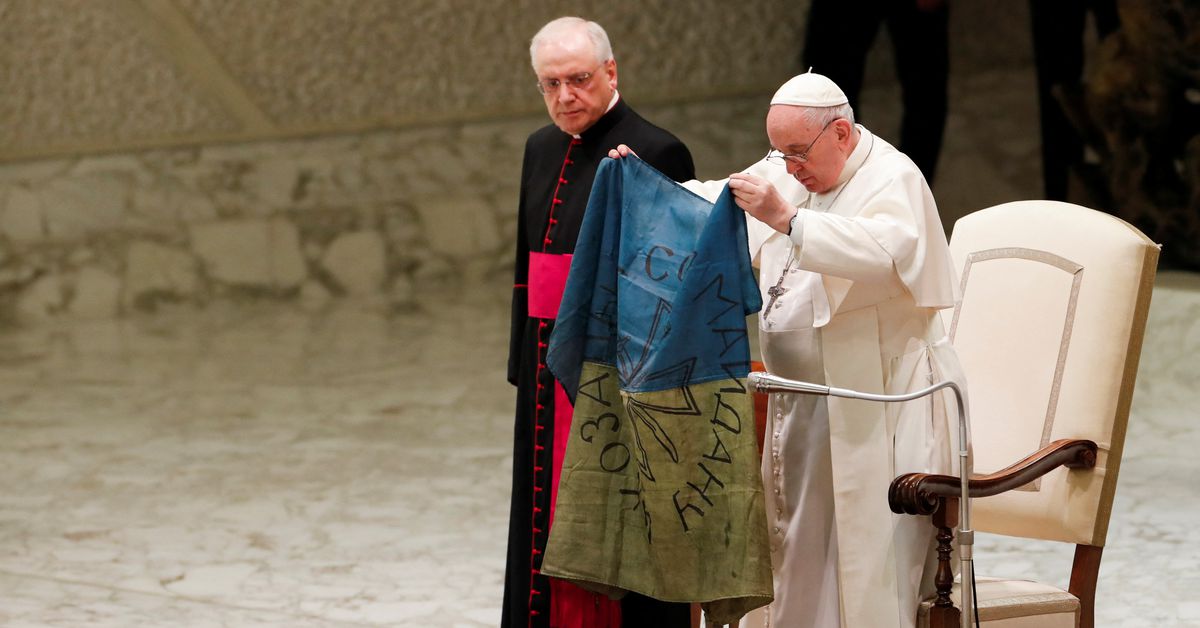 VATICAN CITY, April 6 (Reuters) – Pope Francis on Wednesday condemned “the massacre of Bucha” and kissed a Ukrainian flag sent from the town where tied bodies shot at close range littered the streets after Russian troops withdrew and bodies poked out of a mass grave at a church.

The deaths in Bucha, outside Kyiv, have triggered a global outcry and pledges of further sanctions against Moscow from the West.

“Recent news from the war in Ukraine, instead of bringing relief and hope, brought new atrocities, such as the massacre of Bucha,” Francis said at the end of his weekly audience in the Vatican’s auditorium.

The Kremlin says allegations Russian forces committed war crimes by executing civilians including in Bucha were a “monstrous forgery” aimed at denigrating the Russian army.

Francis said the darkened and stained flag, which had writing and symbols on it was brought to him from Bucha on Tuesday.

Pope Francis holds the Ukrainian flag that was sent to him from the town of Bucha where tied bodies were shot at close range, a mass grave and other signs of executions were found, during the weekly general audience at the Paul VI Hall at the Vatican, April 6, 2022. REUTERS/Remo Casilli

“It comes from the war, precisely from that martyred city, Bucha,” he said, kissing it and holding it up for the audience of several thousand, which broke into applause.

He then asked a group of children war refugees who arrived on Tuesday from Ukraine to come up to him.

“These children had to flee in order to arrive in a safe land. This is the fruit of war. Let’s not forget them and let’s not forget the Ukrainian people,” he said, before giving each child a gift of a chocolate Easter egg.

Speaking in the earlier part of his audience about the post-World War Two period, Francis said: “In the war in Ukraine, we are witnessing the impotency of the United Nations”.

During a trip to Malta at the weekend, Francis said he was considering a trip to Kyiv and implicitly criticised Russian President Vladimir Putin over the invasion of Ukraine, saying a “potentate” was fomenting conflict for nationalist interests. read more

Francis has only mentioned Russia specifically in prayers, such as during a special global event for peace on March 25, but he has referred to Russia by using terms such as invasion and aggression.