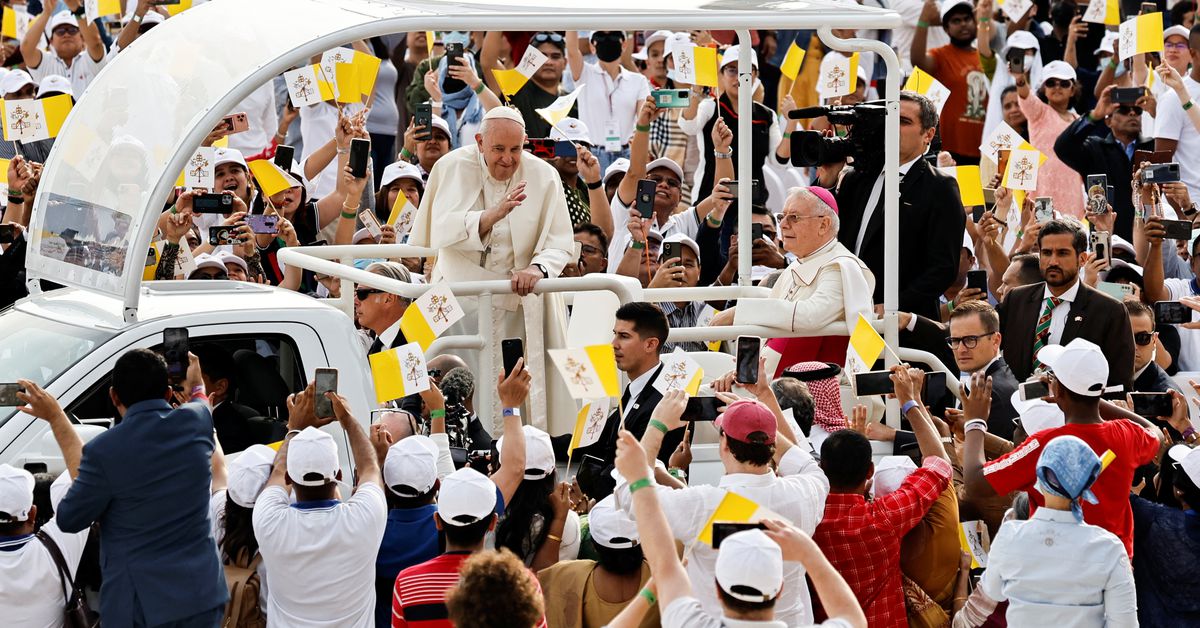 AWALI, Bahrain, Nov 5 (Reuters) – Pope Francis said Mass for thousands of Catholics in Bahrain on Saturday, thrilling members of the small foreign Catholic community from around the Gulf and urging them to show kindness to their hosts, even if they feel sometimes badly treated.

The crowd of about 30,000 people that filled Bahrain’s National Stadium was the second-largest gathering for a papal Mass on the Arabian Peninsula, following one that drew more than 100,000 in the United Arab Emirates in 2019.

“This is a miracle,” said Mary Grace Fortes, 36, a Filipino who works at the reception of a hotel in Bahrain. “So important for us.”

Like many Filipino women who work outside their country, Fortes is married and sends money back home to help support her family, including her husband and 16-year-old son.

Hundreds of Catholic foreign workers were bussed in over the 25-km (16 mile) King Fahd Causeway that links Bahrain with Saudi Arabia, where there are no churches and where Catholics cannot worship openly.

“The Bahrainis arranged everything perfectly for us,” said Jos Chazoor, 53, who is from Kerala in India and works as a manager for a medical equipment company in Saudi Arabia.

Chazoor’s 75-year-old mother was too overcome with emotion to respond to a reporter’s questions just before the pope arrived in the packed stadium to an enthusiastic welcome by faithful waving yellow-and-white Vatican flags.

“She is too thrilled to talk,” said Chazoor, who drives with his mother over the causeway from Saudi Arabia regularly to attend Mass in one of Bahrain’s two churches, which provide pastoral care for the some 160,000 Catholics in Bahrain.

In his homily, Francis appeared to praise Bahrain’s relatively open policy towards non-Muslims.

[1/5] Pope Francis greets people as he attends a holy mass at Bahrain National Stadium during his apostolic journey, in Riffa, Bahrain, November 5, 2022. REUTERS/Hamad I Mohammed

“This very land is a living image of coexistence in diversity, and indeed an image of our world, increasingly marked by the constant migration of peoples and by a pluralism of ideas, customs and traditions,” he said.

Foreign workers, many of them from Asia, provide the backbone of Gulf economies, working in sectors such as construction, hospitality, transport and the oil and gas sector.

The International Labour Organisation says the Gulf’s migrant workers have long faced problems including exploitation by recruitment agencies and employers, poor work conditions, limited access to justice and limited or no freedom of association.

Francis urged his listeners to be kind even to those native people in the Gulf area who do not treat them well, saying this was key to the Gospel message of loving your enemies.

He said they should always be “persevering in good even when evil is done to us, breaking the spiral of vengeance, disarming violence, demilitarizing the heart”.

As Francis was driven on a open popemobile through the crowd on the stadium’s pitch just before the start of the Mass, a speaker on the altar platform shouted “God bless the pope, God bless the royal family.”

A Bahrain government spokesperson said 111 nationalities attended the Mass in the island state, where foreigners comprise about half of Bahrain’s population of roughly 1.5 million.

The prayers of the faithful during the Mass were read in languages spoken by foreign workers including Tagalog, Swahili, Malayalam, Tamil and Konkani.

The Mass was attended by one of the sons of King Hamad bin Isa Al Khalifa and several government ministers.