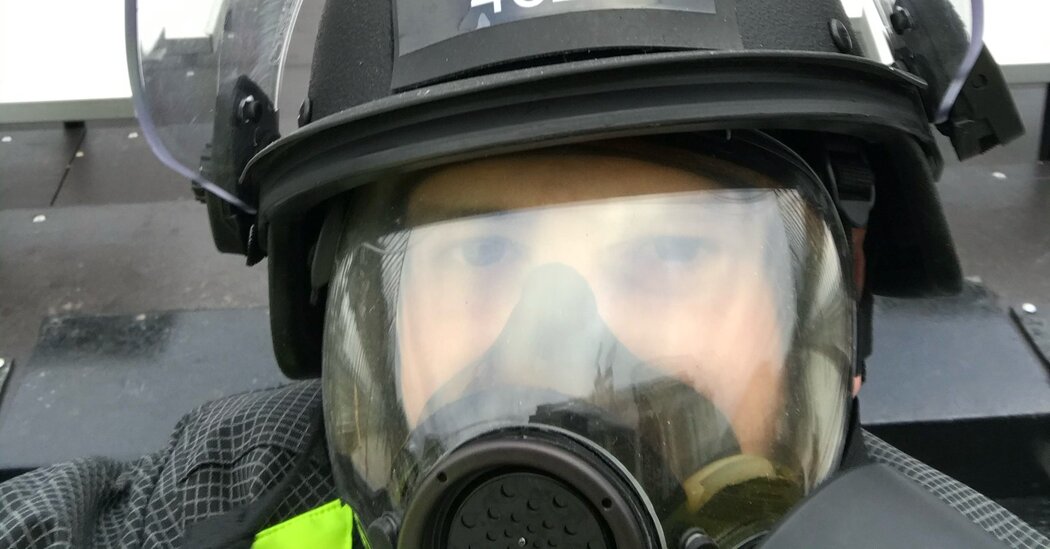 The death of Officer Jeffrey Smith, who killed himself nine days after confronting a mob at the U.S. Capitol on Jan. 6, 2021, was the direct result of an injury he sustained during the riot, a retirement board has found.

The ruling marks the first time in the records of Washington, D.C.’s Metropolitan Police Department — and one of very few times across the country — that a suicide has been classified as a line-of-duty death.

The moment may be a tipping point in a crusade to lift long-held taboos against open discussion of depression, addiction and suicide in policing, with several groups pushing for officers to have greater access to confidential counseling and other emotional supports.

Their case was bolstered by the events of Jan. 6, when the nation watched as officers endured assaults, racist slurs and taunts. The names of Officer Smith and Officer Howard Liebengood, a Capitol Police officer who also took his own life, were mentioned in the same breath as those of Officer Brian Sicknick, who died after clashing with rioters, and Officer Eugene Goodman, who lured the mob away from the Senate chamber.

Speaker Nancy Pelosi and other lawmakers supported the call for Officers Smith and Liebengood to be granted line-of-duty honors.

But police departments do not typically recognize suicide as job-related. By law, a federal benefit of $390,000 awarded to the families of fallen police officers and firefighters cannot be granted for any death “caused by the officer’s intention,” a prohibition reiterated in many city statutes, including Washington’s.

The policy stands in sharp contrast to that of the United States military, which now treats some 90 percent of suicides as line-of-duty deaths caused by post-traumatic stress, brain injuries and other deployment hazards.

The Police and Firefighters Retirement and Relief Board in Washington found this week that the head injury Officer Smith sustained during the riot, which his widow said had triggered a deep depression in her husband, was the “sole and direct cause” of his death. He shot himself with his service weapon on the day he had been ordered to return to work.

His widow, Erin Smith, will be entitled to continue receiving 100 percent of her husband’s salary, as opposed to the 33 percent she would have otherwise received. She may still be barred from receiving the lump-sum federal benefit.

The family of Officer Liebengood, who killed himself on Jan. 9 after working three long shifts following the riot, is still seeking a line-of-duty death designation from the Labor Department’s Federal Employees’ Compensation Program. They have also applied for the lump-sum benefit from the Justice Department.

The Capitol Police submitted paperwork last month to assist the family’s application, including information about his activities in the 24 hours before his death.

The Liebengood family has pinned some hopes on a House bill that would expand death and disability benefits to cover suicide and post-traumatic stress disorder, unless they were shown to be unrelated to the officer’s job.

The congressional representatives of Officers Liebengood, 51, and Smith, 35, both of whom were Virginia residents, have pushed for line-of-duty designations.

“We will forever be grateful for his service to protect our Capitol,” Senator Tim Kaine, a Democrat from Virginia, said of Officer Smith in a statement.

Officer Smith, a 12-year veteran of the department, loved his patrol beat near the Washington Mall so much that he would not put in for promotion for fear of being transferred.

But after the events of Jan. 6, his mood and demeanor completely changed. He was shaken and despondent over the chaotic events of the day and uncharacteristically quick to anger, Ms. Smith said.

“He was a completely different person,” she told The New York Times in July. “I do believe if he did not go to work that day, he would be here and we would not be having this conversation.”

After many months, Ms. Smith and her lawyer, David P. Weber, were able to obtain the video from Officer Smith’s body-worn camera, which appears to show him being assaulted twice, once in the Capitol building and again outside, when a metal pole came flying at him.

A sergeant sent him to the Police and Fire Clinic, which handles job-related injuries, where he was prescribed ibuprofen and sent home. After a follow-up visit about a week later, he was ordered to return to work. It was on the way to his shift that he shot himself.

Medical experts retained by Ms. Smith said that he had no history of depression or mental health issues before Jan. 6, and that his death was caused by “post-concussion syndrome,” which can lead to cognitive problems, depression and suicidal thoughts.

If you are having thoughts of suicide, call the National Suicide Prevention Lifeline at 1-800-273-8255 (TALK). You can find a list of additional resources at SpeakingOfSuicide.com/resources.