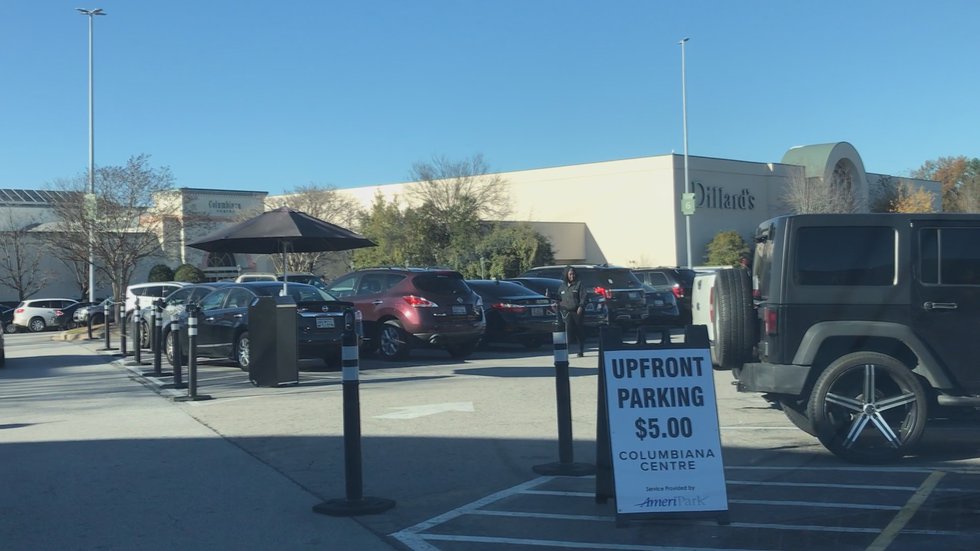 Chief Skip Holbrook said no one was killed in the shooting but 12 people were injured. Ten of those people were hit by gunfire. Two were trampled in the crowd as people tried to escape.

Ten people are in the hospital, two them went by themselves to the hospital. Six of those are in stable condition and two are in critical condition. The youngest victim is 15-years-old and the oldest is 73.

Three people have been detained in the investigation. Holbrook said police do not believe this is a random shooting and that the people knew each other.

Police have been clearing the stores one by one inside the mall. Law enforcement has asked anyone still inside to stay put until officials can evacuate them. A reunification area has been set up at 320 Columbiana Drive. Anyone still inside the mall can call 803-252-2911 to let law enforcement be aware of your location. Separated families can call 803-732-4436 to speak with officials to help reunite.

Anyone with information is being asked to reach out to law enforcement at 803-545-3525.

Prisma Health issued a statement on the shooting,

“Prisma Health sends its thoughts and prayers to everyone impacted by the incident at Columbiana Centre Mall including our first responders. Prisma Health hospitals in the Midlands received 11 patients with various injuries including gunshot wounds. These Emergency Departments are on lockdown, which is a normal part of emergency procedures.”

Prisma Health reported at around 7:17 p.m. that of the 11 patients received in Prisma Health hospitals, 9 have been treated and released. Two patients were admitted.

When unfortunate incidents like this happen, an ‘all hands on deck’ approach is taken. A tremendous thank you to surrounding law enforcement partners who are helping #ColumbiaPDSC answer the call for service. pic.twitter.com/Vh9eYuJ4dj

Our community is saddened by this senseless shooting and the pain it caused to innocent bystanders. Our focus is on getting them treatment right now and on being supportive of the multiple law enforcement agencies working together to bring these criminals to justice.

Our community is saddened by this senseless shooting and the pain it caused to innocent bystanders. Our focus is on getting them treatment right now and on being supportive of the multiple law enforcement agencies working together to bring these criminals to justice.

Statement from @ColumbianaCtr: “Today’s isolated, senseless act of violence is extremely upsetting and our thoughts are with everyone impacted. We are grateful for the quick response and continued support of our security team and our partners in law enforcement.”

#ColumbiaPDSC Chief Holbrook will recap incident based on current info gathered, provide update on total number of victims, & what you should do if you have info to help. Progress on case is being made. pic.twitter.com/OuOl9J5nMA

Media Update: media briefing at 5 PM at media staging area. Briefing will be live on this social media platform.

🚨Employees inside the mall who were told to shelter in place for safety, law enforcement officers will come to you as a protected escort. DO NOT leave a store until told to do so by proper authorities.

For those people still inside the mall, you can call 9-1-1 or 803-252-2911 and tell the dispatchers your location. Dispatchers will notify law enforcement immediately. Again, multiple law enforcement agencies/ officers are on scene to assist #ColumbiaPDSC.

The reunification site for loved ones is at the Fairfield Inn at 320 Columbiana Drive, according to the Lexington County Sheriff’s Department.

MALL SHOOTING: Pictures of the scene given to me by a person who was inside the mall. Heard from another man who said when he heard the shots he immediately took cover and buried himself, a woman and her child under clothing in the store. pic.twitter.com/zydqE9eWsD

Please use caution while driving in the area.

Update: We have confirmed that people have been injured during the incident — they are receiving medical attention. The extent of injuries unknown at this time. #ColumbiaPDSC officers have been evacuating the mall and getting people to safety.

Officers are assessing the scene. The main entrance to the mall on Harbison Boulevard is closed.

Parts of I-26 West are closed near the Harbison area.

This story is developing and will be updated as more information becomes available.

#Alert 🚨#ColumbiaPDSC officers are responding to shots fired at Columbiana Centre. No confirmation if there are any injuries. Officers are assessing the scene. Updates posted here.

Notice a spelling or grammar error in this article? Click or tap here to report it. Please include the article’s headline.