Poland offers MiG fighters to the U.S. as Ukraine asks for help – POLITICO 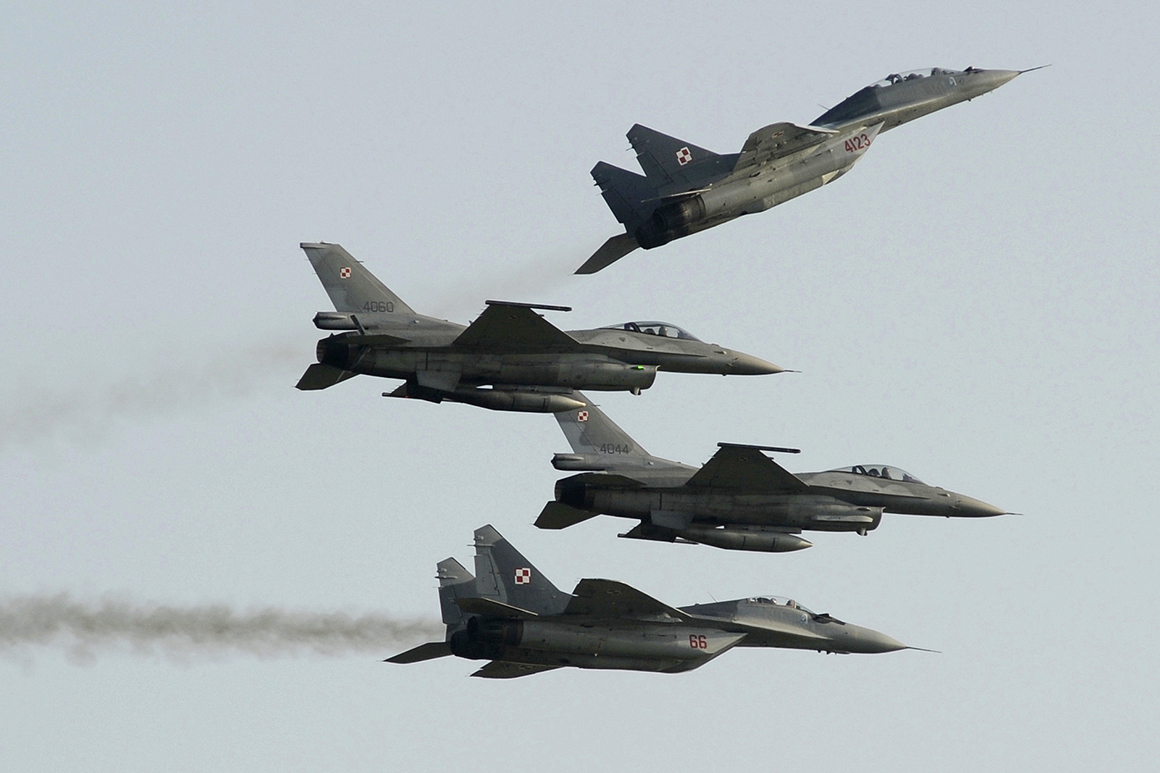 Poland also called on other NATO allies that operate MiG-29 jets “to act in the same vein.”

Ukraine flies the MiG-29 and has suffered heavy losses since Russia invaded late last month. Top Ukrainian officials have since asked other countries that operate the jet to transfer their MiG-29s, since it would mean minimal training for Ukrainian pilots.

By transferring the planes to American custody rather than directly handing them over to the Ukrainians, the Polish government sidesteps the logistical challenge of getting the jets over the border.

Poland’s announcement appeared to catch the Biden administration off guard. Spokespeople with the U.S. European Command and the State Department declined to comment. Victoria Nuland, undersecretary of State for political affairs, told lawmakers on Tuesday afternoon that this “was a surprise move by the Poles.”

“I saw that announcement by the government of Poland as I was literally driving here today,” she told members of the Senate Foreign Relations Committee. “To my knowledge, it wasn’t pre-consulted with us that they planned to give these planes to us. But as you know, we have been having consultations with them for a couple of days now about this request from the Ukrainians to receive their aircraft and were they to donate them, whether we would be able to help support backfill in their own security needs.”

A Pentagon official emailed that “we’ve seen the Polish government’s announcement,” adding, “we have nothing to offer at this time.”

The airspace over Ukraine is still contested, a senior Defense Department official told reporters at the Pentagon Tuesday, with neither the Ukrainians nor the Russians owning the sky.

“The Ukrainians are still able to fly and to conduct missile defense,” said the official, who spoke on the condition of anonymity to discuss current operations. “The Russians continue to fly and also are capable of missile defense — very little of the nation of Ukraine is not covered by some sort of Russian surface-to-air missile capability.”

The saga over the planes began just days after Russia invaded Ukraine, when European Union security chief Josep Borrell said Poland, along with other Eastern European countries that still fly Russian fighter planes, had agreed to quickly transfer the jets to Ukrainian pilots.

That turned out to not be the case.

Polish president Andrzej Duda publicly rejected the deal. But U.S. officials confirmed over the weekend that it was still under discussion. Secretary of State Antony Blinken said Sunday the U.S. was working with Poland on plans to supply Ukraine with the MiG-29s, and to “backfill anything that they provide to the Ukrainians,” on CNN’s “State of the Union.”

Poland would most likely receive used American F-16 fighter planes in return for giving up its MiG-29s.

Other countries that operate the MiG-29 include Slovakia and Bulgaria, though both countries last week rejected the idea of transferring their aircraft.

Slovakia’s small fleet of MiG-29s are the country’s only fighter jets, and the government is uneasy about losing any of its air power until it wraps up an agreement with Poland to provide protection of Slovak airspace.