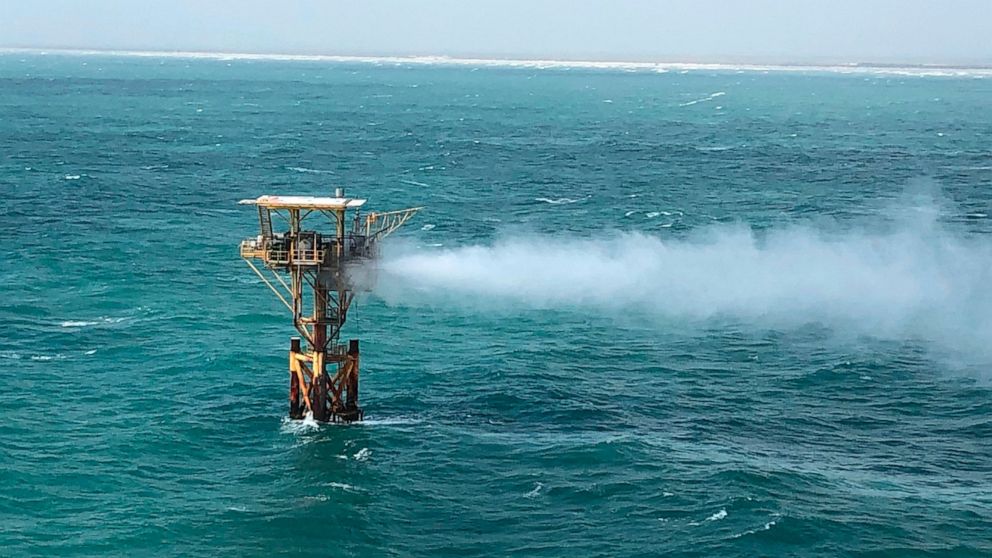 CORPUS CHRISTI, Texas — Efforts to stem a plume spewing Tuesday from an offshore natural gas well platform in Texas have been hampered by rough waters, but officials say the environmental impact has been minimal.

The U.S. Coast Guard said that in addition to the plume, a sound like a jet engine came from the unmanned platform located about 3 miles (5 kilometers) offshore from Bob Hall Pier on Padre Island.

U.S. Coast Guard spokeswoman Hailye Reynolds said “very rough” waters caused by high winds have meant that no one has been able to reach the platform by boat.

Reynolds said they haven’t seen any environmental impact to the shoreline but that there was a light natural gas sheen surrounding the platform that is 300 feet (91 meters) by 100 feet (30 meters).

“It’s not a big concern because it’s very light and usually natural gas just evaporates upon impact, so we’re not too concerned,” Reynolds said.

Nueces County said the Texas Commission on Environmental Quality and the National Weather Service are monitoring the air but haven’t reported significant findings.

The Coast Guard said the platform is owned by Houston-based Magellan E&P Holdings Inc. The company referred questions to Witt O’Brien’s, which is handling Magellan’s operational response to the incident.

Witt O’Brien’s spokesman Sean Fitzgerald said they are working closely with the Coast Guard. He said they don’t yet know what caused the well to begin emitting the plume of natural gas, water and condensate.

“When we are able to to get to the platform, we’ll be much better able to determine a very quick course of action to stop the plume, but at this point we’re just very limited and very frustrated because of the weather conditions,” Fitzgerald said.

Last month four people were killed when a dredging vessel in the Port of Corpus Christi hit a submerged propane pipeline, causing an explosion.