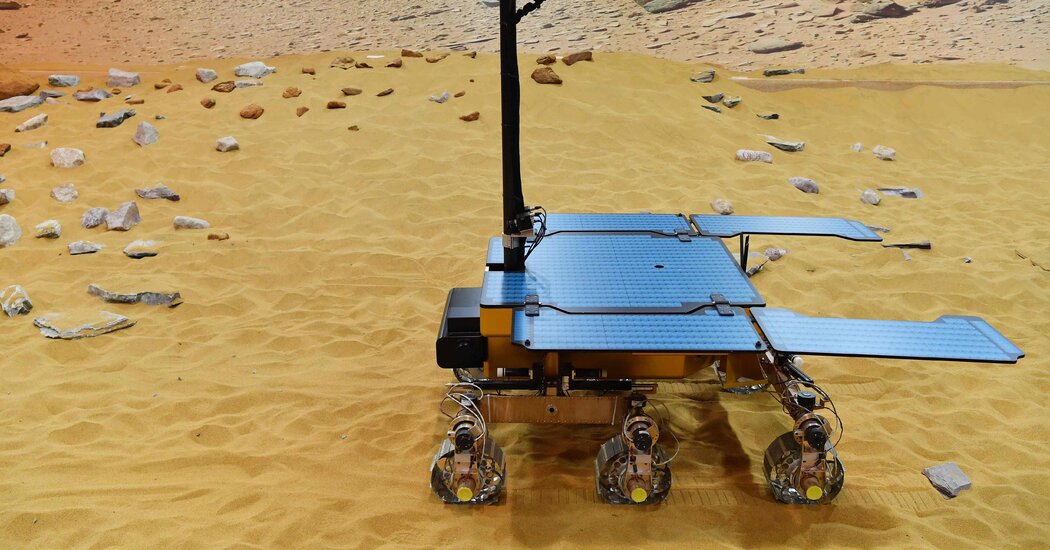 The planned launch in 2022 of a European space mission with Russia to land a robot on Mars is now “very unlikely,” the European Space Agency said on Monday.

The likely postponement of the mission is a result of European Union sanctions placed on Russia for its invasion of Ukraine. Civil space cooperation between Russia and Western countries has for decades progressed in spite of areas of conflict on the ground. But the military conflict in Ukraine has interfered with both sides’ ability to compartmentalize what happens in space from what occurs on the planet’s surface.

The ExoMars mission, which includes a robotic rover built by the European Space Agency bundled with a landing platform supplied by Russia, was expected to launch in the fall of this year from a Russian-owned spaceport in Kazakhstan. In 2023, the two partners would then attempt a landing which included a rover, Rosalind Franklin, which is named for an English scientist who helped discover DNA’s structure.

But in a brief statement deploring the “human casualties and tragic consequences of the war in Ukraine,” ESA, a group of 22 European states, said “the sanctions and the wider context make a launch in 2022 very unlikely.”

The ESA statement makes all but certain another delay of at least two years for the ExoMars mission, which was designed to traverse the Martian surface to look for clues to potential ancient life with cameras, sensors and a drill. Journeys to Mars typically launch during a window approximately every two years when the red planet comes into alignment with Earth, allowing a shorter journey. Funding and engineering issues had previously delayed the mission from a 2018 launch. The Covid-19 pandemic and technical problems spurred the mission’s most recent delay in 2020.

The ExoMars predicament is the latest civil space fallout from Russia’s invasion. Last week, Roscosmos, Russia’s space agency, said it would halt launches of its workhorse Soyuz rocket at ESA’s launchpad in French Guiana and bring home 87 Russian personnel from the site, effectively “suspending cooperation with European partners in organizing space launches.” That could affect at least four European missions in the coming months.

The war also has called into question the fate of other international space partnerships such as those aboard the International Space Station, an orbital science laboratory maintained primarily by NASA and Roscosmos. The alliances that make up the two-decade old station, a symbol of post-Cold War diplomacy, have weathered past geopolitical conflicts on Earth.

The space station relies on both electricity from the American section to power the outpost, and engines on attached Russian spacecraft to maintain its orbit. Starting in 2011, NASA relied on Russia’s rockets to transport its astronauts to orbit when the space shuttles were retired. But that changed in 2020 when SpaceX’s Crew Dragon capsule began carrying NASA crews to orbit. The two sides had recently been negotiating launching Russian astronauts on the SpaceX vehicle.

Although Washington unleashed stiffer export control laws for trade in technologies between the U.S. and Russia last week, NASA said the new rules will “continue to allow U.S.-Russia civil space cooperation.” And Kathy Lueders, NASA’s chief of space operations, said during a news conference on Monday that she saw no indication that Russia’s commitment to the International Space Station is waning, or that NASA needed to plan to maintain the space station’s orbit without Russian help.

“It would be a sad day for international operations if we can’t continue to operate in space,” she said.