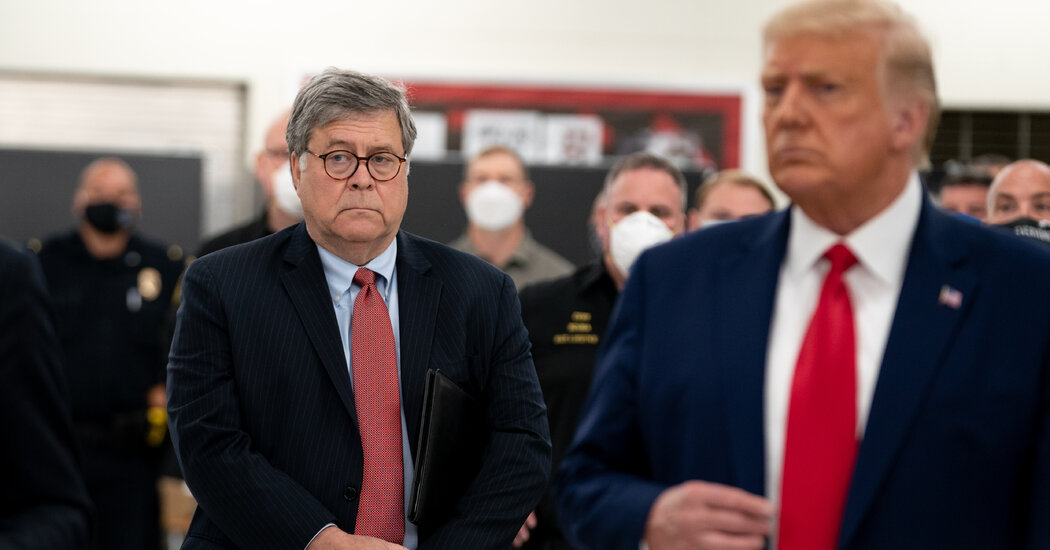 WASHINGTON — Attorney General William P. Barr sidestepped questions on Wednesday about President Trump’s incendiary conspiracy theory about a plane “loaded with thugs” headed to Washington over the weekend, saying that he did not know “what the president was specifically referring to,” but that the F.B.I. was investigating myriad reports that outsiders had traveled to the city to cause trouble.

Mr. Barr said the Justice Department had received reports that people from the West Coast and other parts of the country had flown to Washington to exploit protests for racial justice as opportunities to attack law enforcement and damage property.

“We received numerous reports of individuals coming from Portland, Washington — Seattle — and several other cities to come into Washington for the specific purpose of causing a riot,” Mr. Barr said in an interview with CNN. “I think there were many on planes.”

His comments echoed remarks made by Mayor Muriel Bowser of Washington, who said in a recent news conference that violent clashes had occurred over the weekend between the police and protesters, and that outsiders who had come to Washington to fight with law enforcement were largely to blame.

“What we saw were agitators who descended on the city,” Ms. Bowser said. “It sounds like many of them came on Wednesday and Thursday armed for battle with fireworks, baseball bats, laser pointers, and they were looking for the police to confront. They set fire to local newspaper boxes, accomplishing absolutely nothing.”

Mr. Barr’s response distanced himself from the specific claim made by Mr. Trump — one that is similar to an unsubstantiated conspiracy theory that has spread on Facebook and that senior administration officials say caught the White House off guard and forced aides to seek evidence that such a plane existed. But it also reinforced the president’s comments about agitators, primarily on the political left, working to turn Washington, D.C.; Portland, Ore.; Kenosha, Wis.; and other cities into dangerous battlefields between anti-government extremists and law enforcement.

“I’ve talked to every police chief in every city where there’s been major violence, and they all have identified antifa as the ramrod for the violence,” Mr. Barr said. Antifa is a loose movement that purports to be against fascism, and whose members have been blamed by federal law enforcement officials for much of the violent behavior that has accompanied protests against systemic racism.

Mr. Barr said the Justice Department was investigating people who could be part of the antifa movement. Pressed to back up the claims about antifa — the Justice Department has instead identified members of “boogaloo,” a far-right group that believes a race war is coming, in criminal charging documents this summer related to violence at protests — he noted that some do not identify themselves as antifa members when they are arrested.

While Mr. Barr skirted Mr. Trump’s claim about a planeload of rioters, made during a Fox News interview on Monday night, White House aides have scrambled to reverse engineer what he must have meant, senior administration officials said. Officials pointed to briefings the president has received about agitators who traveled to different cities to take advantage of protests to create unrest, but no one could identify what airplane episode Mr. Trump was talking about.

In his interview with CNN, Mr. Barr also lent credence to Mr. Trump’s unsupported claims that voting by mail would lead to widespread fraud and cast doubt on the results of November’s elections. Voter fraud is rare, though slightly more common among mail-in votes, but any efforts large enough to swing an election outcome would most likely be detected, experts say.

Democrats fear that Mr. Trump has attacked voting by mail as a way to depress turnout in the presidential election.

Mr. Barr told CNN that voting by mail was “playing with fire.” He said foreign nations intended to manipulate the election by sending fake ballots to voters, but offered no evidence to support his claim. He called his assertion “a matter of logic.”

Intelligence and election security officials have undercut those claims, finding no intelligence that any foreign adversary is making a coordinated attempt to undermine absentee voting or create fake mail-in ballots.

Mr. Barr said that polling places should take precautions against the spread of the coronavirus and called for people who are particularly vulnerable to the virus to get an absentee ballot and cast it using guidelines and processes that existed before the pandemic.

He also declined to say that Russia was again working to interfere in the election, as intelligence officials have concluded, saying that he had only seen preliminary activity that suggested that the Kremlin “might try again.” The intelligence community said last month that Russia was already trying to interfere in the election to help the president but that China preferred he be defeated.

Mr. Barr said he believed China was far more of a threat than Russia or Iran in trying to influence the United States. The intelligence assessment last month concluded that while China sought to influence American politics, it had not yet decided to wade directly into the presidential race.