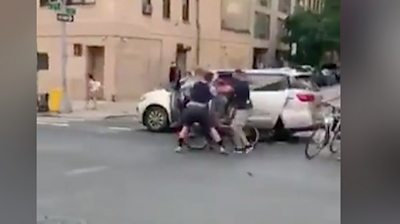 A viral video showing a young woman on a skateboard being hauled into an unmarked police vehicle has drawn criticism from the public, with many saying it looked like a ‘kidnapping’ because the police officers were not in uniform.

The NYPD added that officers were assaulted with rocks and bottles during her arrest.