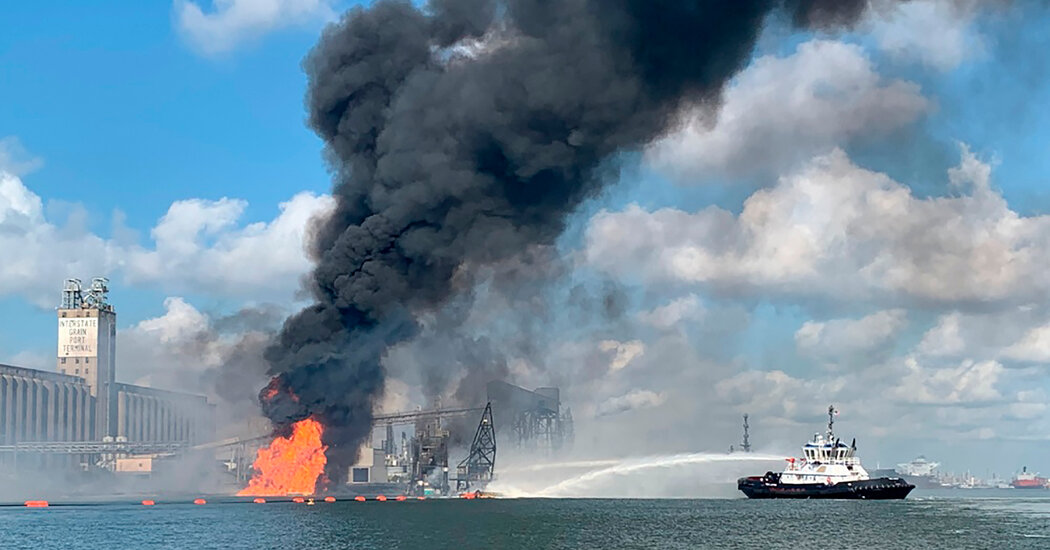 A submerged pipeline that exploded and a fire on board a dredging vessel on Friday left two crew members dead and two others missing in Corpus Christi, Texas, the U.S. Coast Guard said.

The bodies of two crew members from the vessel — named the Waymon L. Boyd from the Orion Marine Group — were recovered on Saturday morning. The Coast Guard is continuing to search for the two missing crew members, said Edward Gaynor, the captain of the U.S. Coast Guard Sector/Air Station Corpus Christi.

Those killed were not publicly identified. Six people were hospitalized, with some being treated for burns, the authorities said.

Officials were notified about a fire at the Port of Corpus Christi around 8 a.m. on Friday. Lt. Marina Lawrence of the Coast Guard said that although it was clear that a submerged pipeline exploded and that the fire and the pipeline explosion were related, the cause remained unclear and was under investigation.

Agencies offered conflicting accounts, however, about the explosion.

The Texas Commission on Environmental Quality said on Friday that a barge struck a propane pipeline. The Port of Corpus Christi said it was a natural gas pipeline, the television station KSAT reported.

The U.S. Coast Guard and the National Transportation Safety Board are investigating the cause of the explosion, Sean Strawbridge, the chief executive of the Port of Corpus Christi, said on Saturday afternoon.

The Port of Corpus Christi, which is on the western Gulf of Mexico, has a 47-foot-deep channel. Mr. Strawbridge said that $200 million worth of goods move through the port on an uninterrupted day.

The fire on the ship reignited on Friday night and was extinguished around 10 p.m. Shortly after, the vessel sank. Captain Gaynor said officials were devising a plan to salvage the ship.

The damaged pipeline was secured on Friday, Mr. Strawbridge said. It was not immediately clear who manages the pipeline.