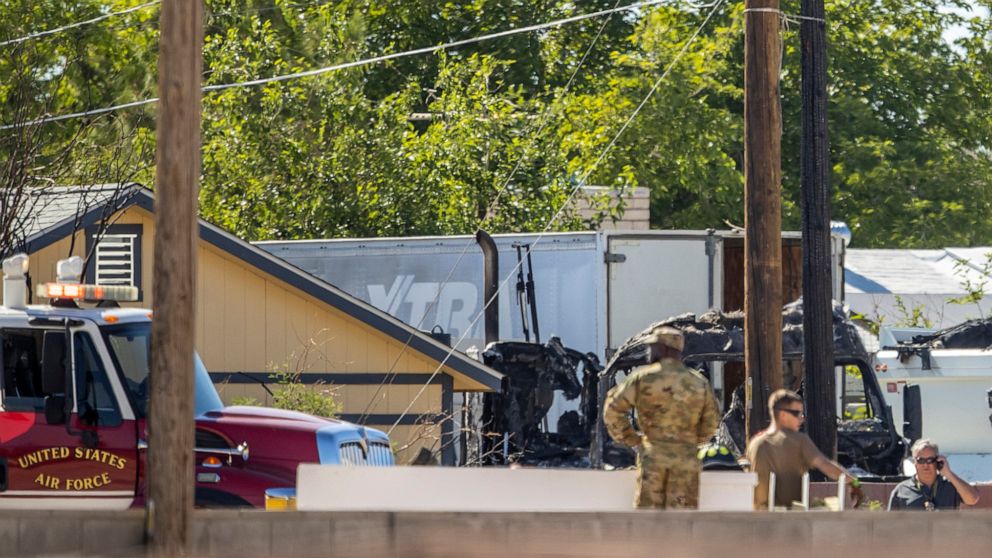 LAS VEGAS — A pilot has died after an aircraft operated by a military contractor out of Nellis Air Force Base crashed in a nearby residential area, authorities in Las Vegas said Monday.

A statement attributed to base spokesman Lt. Col. Bryon McGarry confirmed the crash occurred about 2:30 p.m. Florida-based company Draken US owned the aircraft, and said in a statement that the pilot, whose name has not been released, had died and no one else was on board.

It’s unclear whether there were injuries to people on the ground.

The plane crashed in a yard where a neighbor, Alex Reyes, told the Las Vegas Review-Journal he heard a loud thump and then saw black smoke billowing from the home.

Neighbor Eugenia Brackeen told the newspaper she heard a boom so loud that she couldn’t hear her television. She said her power went out for a short time.

Witnesses posted online images of a plume of smoke not far from a southern fence to the base, of city and base fire crews arriving, and a helicopter circling.

In a Twitter post, Nevada Gov. Steve Sisolak said he and his wife, Kathy, were “praying for all those involved in today’s incident,” including Nellis service members and first-responders.

Police cordoned off the neighborhood about 7 miles (11 kilometers) northeast of downtown Las Vegas.

Nellis is best known internationally as host of periodic training exercises where U.S. and allied pilots conduct mock battles over a restricted military reserve in central Nevada that is half the size of the state of New Jersey.

Aircraft based at Nellis include F-16 Falcon and F-22 Raptor fighter jets and A-10 Warthog attack jets.

The base also is home to the elite Thunderbirds flight demonstration team.

Retired Brig. Gen. Robert Novotny, who stepped down last year after commanding the 57th Wing at Nellis, told KTNV-TV that contract aircraft and pilots take part in some exercises as participants “to train against.”

A National Transportation Safety Board investigator is traveling to site of the crashed Dassault Aviation Mirage F-1, the agency tweeted.

The crash was the first out of Nellis since Thunderbirds pilot Maj. Stephen Del Bango of Valencia, California, died in April 2018 during a training flight over the Nevada Test and Training Range.