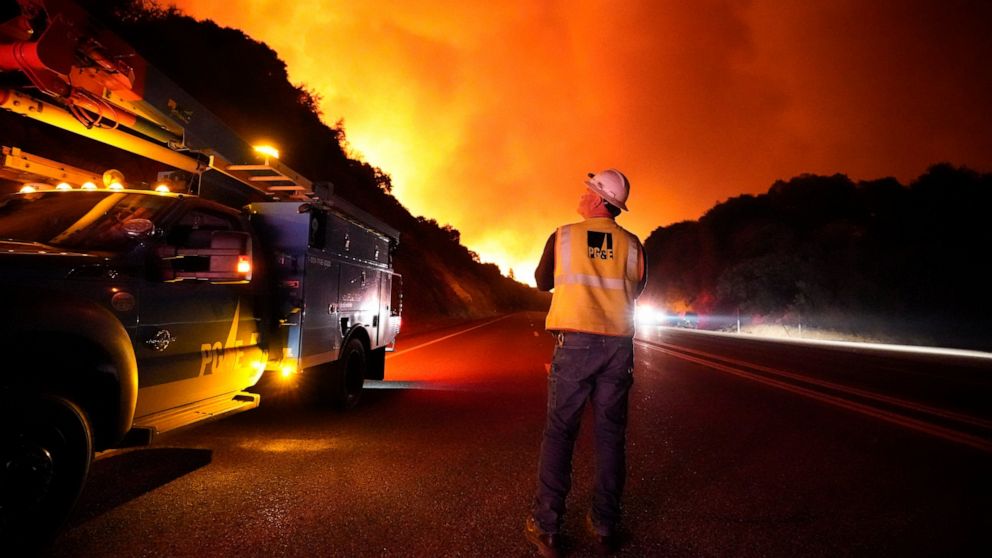 SAN FRANCISCO — Pacific Gas & Electric may cut power to over 1 million people on Sunday to prevent the chance of sparking wildfires as extreme fire weather returns to the region, the utility announced Friday.

The nation’s largest utility said it could black out customers in 38 counties — including most of the San Francisco Bay Area — as weather forecasts called for a return of bone-dry, gusty weather that carries the threat of downing or fouling power lines or other equipment that in recent years have been blamed for igniting massive and deadly blazes in central and Northern California.

The safety shutoffs were expected to begin as early as Sunday morning and last into Tuesday, affecting 466,000 homes and businesses, or more than 1 million residents assuming between two and three people per home or business customer.

Cuts are predicted to encompass parts of the Sacramento Valley, the northern and central Sierra Nevada, upper elevations of the San Francisco Bay Area, the Santa Cruz Mountains, the Central Coast and portions of southern Kern County.

The shutoffs could include 19,000 customers in parts of Butte County, where a 2018 blaze ignited by PG&E equipment destroyed much of the town of Paradise and killed 85 people.

Forecasts call for the “the driest humidity levels and the strongest winds of the wildfire season thus far,” a PG&E statement said.

The National Weather Service issued red flag warnings for many areas, predicting winds of 35 mph (56 kph) or higher in San Francisco and lower elevations and up to 70 mph (113 kph) in some mountains. The concern is that any spark could be blown into flames sweeping through tinder-dry brush and forestland.

“On a scale of 1 to 10, this event is a 9,” Craig Clements, director of San Jose State University’s Fire Weather Lab, told the Bay Area News Group. “Historically our biggest fires are in October. We are in a critical period.”

The National Weather Service said the conditions could equal those during devastating fires in California’s wind country in 2017 and last year’s Kincade Fire.

The public safety power shutoff, or PSPS, would be the fifth this year, including one that began Wednesday and was scheduled to end late Friday.

The upcoming weather forecast will be even more dangerous, said Scott Strenfel, the utility’s chief meteorologist.

“We’re seeing four extremes in the weather for this potential PSPS event: extremely high winds, extremely low humidity, extreme dry fuels due to the hottest average temperatures over the last six months according to records that go back 126 years, and extreme drought across the territory given lack of rainfall,” he said in a statement.

Eight of the 10 deadliest fires in California history have occurred in October or November. Some of the largest also have occurred since August of this year.

The California Department of Forestry and Fire Protection, known as Cal Fire, said 5,500 firefighters were working Friday to fully contain 19 wildfires. Two-dozen new fires were contained Thursday despite red flag conditions. Numerous studies have linked bigger wildfires in America to climate change from the burning of coal, oil and gas.

Scientists say climate change has made California much drier, meaning trees and other plants are more flammable.

More 8,600 wildfires have scorched well over 6,400 square miles (16,576 square kilometers) and destroyed about 9,200 buildings in California this year. There have been 31 deaths.

All of the huge fires have been fully or significantly contained, but more than 6,000 firefighters remain committed to 19 blazes, including a dozen major incidents, Cal Fire said.

Many of this year’s devastating fires were started by thousands of dry lightning strikes. But some of the fires remain under investigation for potential electrical causes.

This story was first published on October 23, 2020. It was updated on October 24, 2020, to correct that Pacific Gas & Electric may, not will, cut power to some 1 million people. With AP Photos.