PFAS: The ‘Forever Chemicals’ You Couldn’t Escape if You Tried 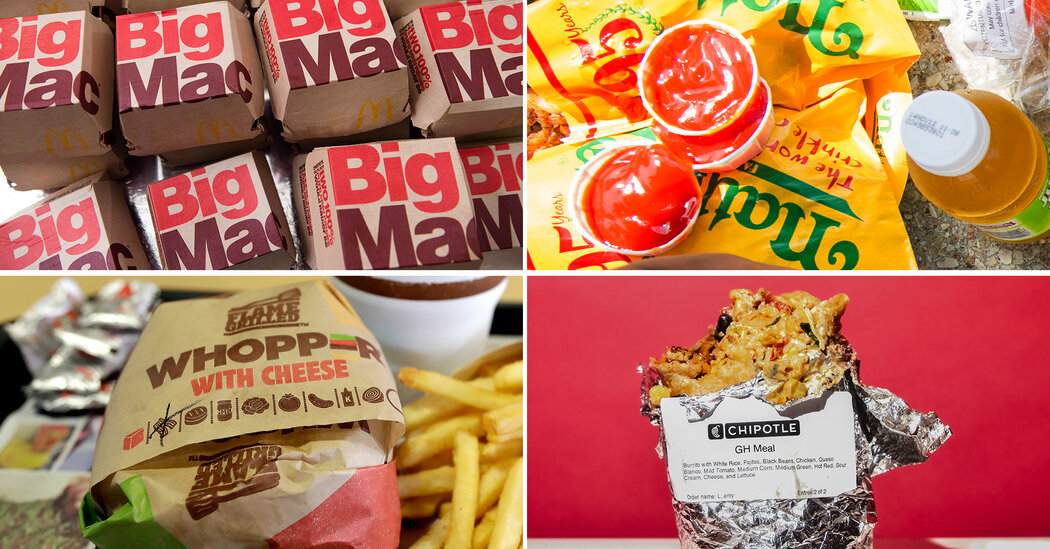 Based on nothing more than their name, per- and polyfluoroalkyl substances certainly don’t sound like something you’d want to find in your burger wrapper. But according to a recent investigation by Consumer Reports, they’re very much there — as well as in your salad bowl, fry bag and sandwich wrap.

So what are these virtually indestructible compounds, created in a lab in 1938 by a 27-year-old chemist? And how worried do you need to be about them?

This is what you should know about PFAS.

Where am I most likely to run into this stuff?

As one researcher put it: “everywhere.”

PFAS are in your shampoo bottle, your stain-resistant couch, your dental floss, your bicycle lubricant. And when these multipurpose compounds are used in food packaging, they have a way of transferring to the food itself. To say that PFAS are difficult to avoid is an understatement.

Although these substances have been in use for eight decades, regulators have only recently acquired the scientific understanding and technical capacity needed to test for them at the very low concentrations — measured in parts per trillion — at which they’re present in food, according to the Food and Drug Administration.

In light of those advances, the F.D.A. recommends not reading too much into the fact that a given product might have “detectable” levels of the chemicals. “Even when there have been detectable levels of PFAS,” the agency said, “our safety assessments have shown no cause for avoiding these foods.”

Cava, a fast-casual Mediterranean restaurant whose packaging has high levels of PFAS, according to Consumer Reports, began phasing out the compounds from its products in August, but has run into supply chain issues that delayed the process, a Cava representative said in a statement.

Nathan’s Famous began phasing out PFAS from its wrappers in 2020, completely eliminating its traditional red and green striped bags, the company said, and will stop using products that include PFAS by design before the end of the year.

McDonald’s and Burger King said they were committed to removing all PFAS from their packaging by the end of 2025.

From packaging and products, PFAS have found their way into rainwater, soil, sediment, ice caps, and outdoor and indoor plants. The substances have been detected in the living tissues of animals around the world.

“It’s in the Arctic. It’s in the polar bears. It’s in trees. It is at the bottom of the ocean,” Keith Vorst, an associate professor at Iowa State University who studies the levels of PFAS in products, said in an interview. “We have literally polluted our planet.”

OK, but why are they everywhere?

Per- and polyfluoroalkyl substances are a group of over a thousand chemical compounds that were discovered in 1938 by a young chemist named Roy Plunkett who was working at DuPont at the time. Their first use was as the nonstick agent in Teflon.

They have since been added to an array of products to make them resistant to heat, water, oil and corrosion. The chemical composition of PFAS — they are created by fusing carbon and fluorine atoms — makes the compounds practically unbreakable.

“They’re called forever chemicals because they’re incredibly persistent,” said David Andrews, a senior scientist for the Environmental Working Group, an advocacy organization. “The carbon-fluorine bond itself doesn’t break apart in the environment, and so once the chemicals are released, they typically spread out.”

Because they don’t easily degrade, they can accumulate in our bodies and the environment when ingested or otherwise internalized.

As an example, Dr. Vorst said to imagine a factory that intentionally used PFAS in its products. Even if that factory completely stopped using the compounds today, traces of PFAS would still be found in the company’s products in 10 or 15 years if it continued to use the same production plant.

It can take four to 15 years for levels of PFAS to reduce by half in the human body, and it can take centuries for the substances to disappear from the environment, researchers said.

“A net-zero PFAS concentration is impossible,” Dr. Vorst said. “All we can hope for is getting as close to zero as possible.”

Do I need to be worried?

Long-term exposure to PFAS has been linked to an increased risk of some cancers, immune system suppression and problems with fetal development. Some PFAS contain compounds that could accumulate in the lungs and have been linked to more severe cases of Covid-19.

“Once they get into the body, they like to hang out in the blood because they like to stick to proteins in our blood and interact with all sorts of different molecules,” said Jamie DeWitt, a professor of pharmacology and toxicology at East Carolina University. “That’s why we think they produce the health effects that they produce.”

And although scientists and regulators agree that PFAS should be taken out of use as soon as possible, they also say that the chemical is “not an immediate threat to health,” David A. Savitz, a professor of epidemiology at Brown University, said in an interview.

“It’s a subtle threat, so people have a hard time knowing what to make of it,” he added. “We want to curtail exposure, but it is not an immediate disaster.”

So how do you get rid of them? Are there any efforts to regulate?

In short, we’ll never get rid of them. At least not in our lifetimes.

Most current PFAS regulations concern how much of the chemicals can be present in water, but regulations for their use in products have generally been handled at a state level.

“Right now the biggest thing we can do is phase it out of production,” Dr. Vorst said. In the last decade, many companies have voluntarily removed PFAS from their products, and contamination rates in human blood have decreased, Dr. Savitz said.

In October, the Biden administration revealed a plan to combat PFAS pollution. In the same month, the Environmental Protection Agency also released a “PFAS Strategic Roadmap,” in which it laid out plans for further research into PFAS and for the development of usage guidelines.

But advocates say this might be too little, too late.

Since the 1960s the Food and Drug Administration has been aware of how PFAS affect the body, Melanie Benesh, a legislative lawyer with the Environmental Working Group, said in an interview.

The first evidence that PFAS were toxic to the body was submitted to the F.D.A. by DuPont, where the chemicals were created, in 1966. But the reports did not immediately spur new regulation.

“That resulted in the ultimate lack of regulation and has left us scrambling to try and address this issue now,” Ms. Benesh added. “This was really a preventable crisis.”