Pentagon to give ‘kamikaze drones,’ rockets and other security aid to Ukraine – The Times of Israel

WASHINGTON — The US Defense Department announced Friday it is allotting $300 million in “security assistance” for Ukraine to bolster the country’s defense capabilities, adding to the $1.6 billion Washington has committed since Russia invaded in late February.

“This decision underscores the United States’ unwavering commitment to Ukraine’s sovereignty and territorial integrity in support of its heroic efforts to repel Russia’s war of choice,” Pentagon spokesman John Kirby said in a statement.

On Wednesday, US President Joe Biden and Ukrainian President Volodymyr Zelensky discussed “additional capabilities” to help the Ukrainian military, the White House said in a statement after the call.

In mid-March, Congress passed a funding bill that included $13.6 billion for humanitarian and military aid to Ukraine and NATO allies in eastern Europe.

A large portion of the military equipment the US has given to Ukraine has come from its own stockpile, through a process known as a “presidential drawdown.”

Unlike that process, the $300 million announced Friday will go towards new contracts for military equipment from the Pentagon’s defense industry partners.

One of the technologies included in the announcement is more Switchblade tactical drones.

Dubbed “kamikaze drones,” Switchblades can be directed by an operator to find and, when ready, plunge onto a target, exploding on contact.

Kirby added that the US “also continues to work with its allies and partners to identify and provide to the Ukrainians additional capabilities.” 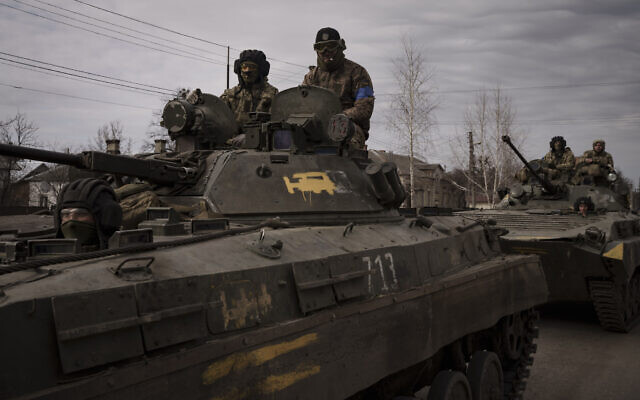 Later Friday evening, the New York Times reported that following a request by Zelensky, the US had decided to facilitate the transfer of Soviet-made tanks from allies to Ukraine.

The decision would mark the first time the US has helped transfer tanks, though details about which countries would participate and how many tanks were being moved were not provided.

Citing a US official, the report noted that the tanks will allow Ukraine to fire long-range artillery strikes against Russian targets in the eastern Donbas region.

Following weeks of fighting, Moscow said last week it will be focusing on the “liberation” of Donbas, where pro-Russian separatists have declared two independent republics.

Russia recognized the independence of the self-declared Donetsk and Lugansk People’s Republics shortly before sending troops into Ukraine on February 24.