Pence tells the convention he and Trump will defend borders and the ‘right to life.’ 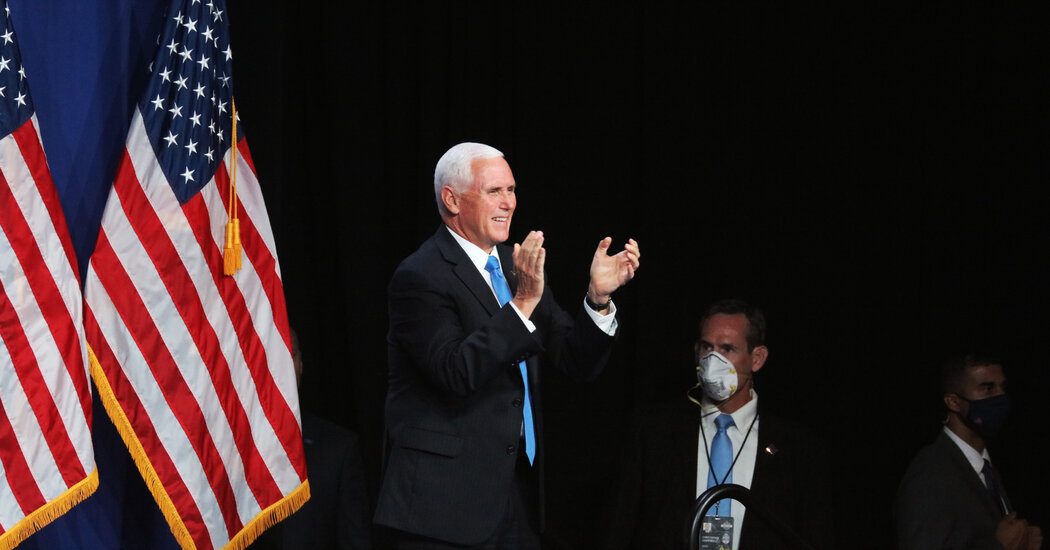 Vice President Mike Pence took the stage to accept his renomination Monday morning as the Republican National Convention kicked off, pitching the Trump-Pence ticket as leaders of a party that stood for “free market economics, secure borders” and the “right to life.”

He said the week would make it clear that the president will “always stand with the men and women who serve on the thin blue line of law enforcement.”

Rebutting the Democrats’ charge that the Nov. 3 election amounted to a referendum on democracy itself, Mr. Pence told the delegates, “the economy is on the ballot.”

Mr. Pence’s speech came as delegates formally cast their votes for Mr. Trump at the opening-day roll call. Ronna McDaniel, chairwoman of the Republican National Committee, offered opening remarks in which she framed Mr. Trump as the empathetic candidate on the ballot, in contrast with his opponent, Joseph R. Biden Jr.

Ms. McDaniel said last week’s Democratic convention was “depressing, doom and gloom, night after night,” calling it “a masterpiece in fiction about President Trump’s record and what he has accomplished for the American people.”

“Their argument for Joe Biden boiled down to the fact they think he’s a nice and empathetic guy,” she said. “Well, let me tell you, raising taxes on 82 percent of Americans is not empathetic.” She seemed to be referring to Mr. Biden’s vow to undo President Trump’s signature 2017 tax cut, which resulted in lower taxes for middle-income earners as well as the wealthy. Mr. Biden pledged on Sunday that if elected he would hold the line on taxes for Americans earning under $400,000.