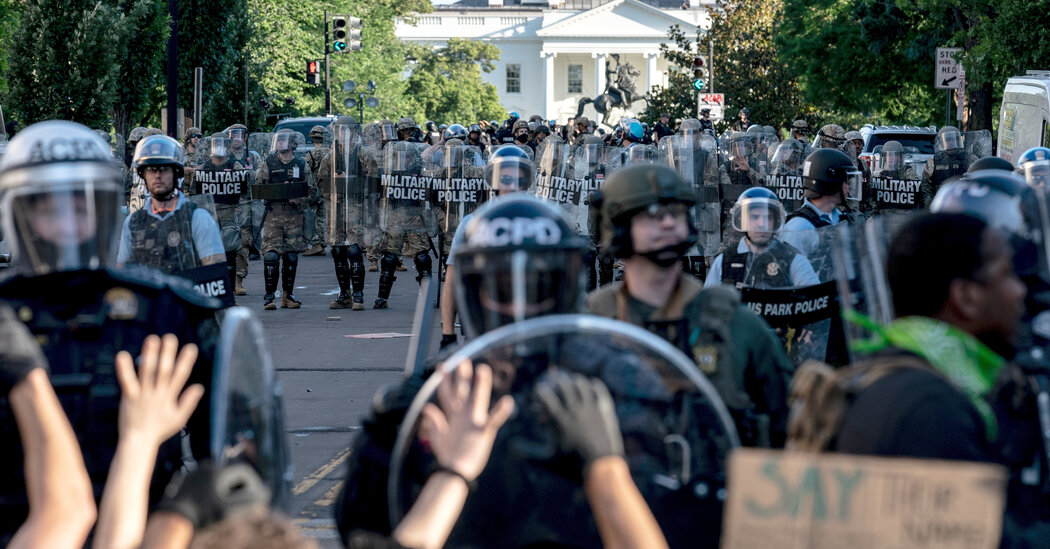 WASHINGTON — A federal watchdog said on Wednesday that the United States Park Police had been planning to clear protesters from a park near the White House well before they learned that President Donald J. Trump was going to walk through the area last year.

The report by the Interior Department’s inspector general concluded that “the evidence did not support a finding” that the Park Police had cleared the area just for Mr. Trump, who strode through it on June 1 last year before posing for photographs in front of St. John’s Episcopal Church holding a Bible.

The burst of violence in Lafayette Square, which came at the height of the racial justice protests last summer, became one of the defining moments of the Trump presidency. Protesters in the shadow of the White House were pushed back with smoke, flash grenades and chemical spray deployed by shield-bearing riot officers and mounted police.

The 30-page report by the Interior Department’s inspector general offers new details about the Park Police’s decision-making. And the sequence of events described in the report suggests that the operation to clear the area turned violent soon after the Park Police were informed of Mr. Trump’s arrival.

But the report’s author was careful to warn it was not to be seen as a definitive account of the day, in part because so many other law enforcement agencies were involved. The inspector general, Mark L. Greenblatt, noted that it was not in his jurisdiction to investigate what the Secret Service and other law enforcement agencies knew and who might have ordered them to use force to clear the park.

The long-awaited report was ordered by congressional lawmakers and former Interior Secretary David Bernhardt to find out the Park Police’s reasons for dispersing the protesters and whether it had been under orders to help stage a presidential photo op.

According to the report, the Park Police were planning to clear the area so contractors could install new fencing.

But protesters were allowed to gather there all day. Mr. Greenblatt said that was because the authorities were waiting for contractors to arrive and for enough law enforcement officers to show up so they could clear the park. That happened around 5:30 p.m., less than an hour before William P. Barr, the attorney general at the time, came to inspect the area himself.

Evidence showed that the Park Police did not know about Mr. Trump’s plan to walk across the square until “mid- to late afternoon on June 1 — hours after it had begun developing its operational plan and the fencing contractor had arrived in the park,” the report said.

The head of operations for the Park Police learned about Mr. Trump’s plan when Mr. Barr came to inspect the area, the report said.

“Are these people still going to be here when POTUS comes out?” Mr. Barr asked, according to the report, referring to the president of the United States.

The operations commander replied to Mr. Barr, “Are you freaking kidding me?” He then hung his head and walked away, the report said.

Shortly after that, the confrontation turned violent.

The report said Mr. Greenblatt did not seek to interview Mr. Barr, White House personnel or the Secret Service, among others, regarding decisions that did not involve the Park Police. Other agencies involved that day included the National Guard, the United States Capitol Police and the Bureau of Alcohol, Tobacco, Firearms and Explosives.

Mr. Greenblatt noted that the Secret Service started its efforts to clear the park before the Park Police had issued their first dispersal warning. In a footnote, the report called that decision one that was “contrary to the operational plan.”

Mr. Trump issued a statement on Wednesday thanking the inspector general for what he called “completely and totally exonerating me in the clearing of Lafayette Park!”

In an interview, Mr. Greenblatt said he did not appreciate the comment.

“That’s uncomfortable for me,” he said. “We are independent from any political administration. This is not at all comfortable footing for anyone in my community.”