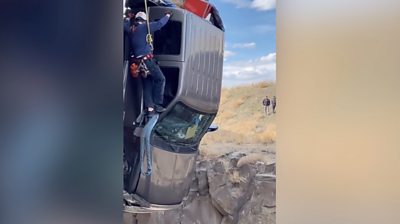 Paramedics have described the rescue of a couple and their dogs from a truck which was dangling 100 feet over a canyon in Idaho.

Emergency responders, including the Magic Valley Paramedics Special Operations Rescue Team (SORT) and Air St. Luke’s, arrived at the scene at Malad gorge in Southern Idaho where the pickup truck was dangling by a chain attached to a trailer which was still on the bridge.

Chad Smith, field supervisor for SORT and a flight paramedic for Air St. Luke’s told BBC Radio 5 Live’s Jim David: “We knew were going to have to act really fast and every second counted.”

Listen to 5 Live on the free BBC Sounds app.