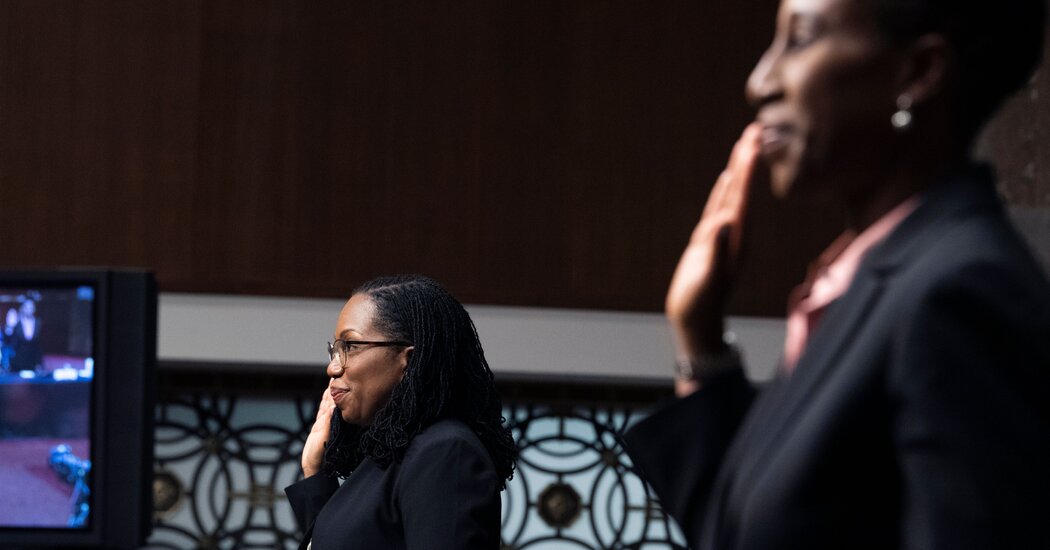 WASHINGTON — The Senate Judiciary Committee approved President Biden’s first two appeals court nominees over Republican opposition on Thursday, as Democrats try to quicken the pace of rebalancing the federal judiciary after hundreds of conservative jurists were seated in the Trump era.

The vote moved Judge Ketanji Brown Jackson, a federal district judge nominated to the U.S. Court of Appeals for the District of Columbia Circuit, and Candace Jackson-Akiwumi, who is slated for the Chicago-based U.S. Court of Appeals for the Seventh Circuit, a step closer to confirmation votes by the full Senate. The nominees, both Black women, are former federal public defenders whose selection was part of a concerted effort by the Biden administration to diversify the federal bench.

“These nominees will bring to the bench outstanding credentials and experience, and a variety of professional perspectives that have been underrepresented many times in the judiciary,” said Senator Richard J. Durbin, Democrat of Illinois and the chairman of the committee, which also voted on Thursday to approve three lower district court nominees.

Senator Charles E. Grassley of Iowa, the senior Republican on the committee, said that rejecting Mr. Biden’s nominees was only fair given the strong opposition Democrats mounted to Mr. Trump’s nominees over the previous four years. He also said he was not convinced of their commitment to interpreting the Constitution as intended.

“We need to hold Democratic circuit nominees to a high standard of constitutionalism, regardless of how impressive their credentials are and how compelling their own personal stories may be,” Mr. Grassley said. “Credentials and backgrounds are not enough, as Democrats showed us.”

Because of rules changes in the Senate, nominees are not subject to the 60-vote filibuster threshold and can be advanced and confirmed by a simple majority, meaning Democrats can seat the Biden picks without Republican votes as long as they remain united.

Mr. Biden has promised to name the first African-American woman to the Supreme Court if he gets the opportunity, and Judge Jackson is among those considered a potential pick should a seat become open.

Democrats say they opposed so many Trump judicial nominees because they were unqualified and had little hands-on courtroom experience, while Judge Jackson and Ms. Jackson-Akiwumi have each been involved in hundreds of federal court proceedings. They also argued that the nominees were being penalized for their past work representing criminal defendants as public defenders, which they warned would prevent those with a broad range of experience from serving as judges.

“Senate Republicans aren’t even trying to hide it anymore,” said Christopher Kang, the chief counsel for the progressive group Demand Justice. “Biden nominees who will bring balance to the federal judiciary will be met with knee-jerk opposition from many Republicans, no matter how brilliant or qualified they may be.”

Democrats have significant ground to make up if they hope to duplicate the judicial success of Mr. Trump. He seated 54 appeals court nominees, three Supreme Court justices and scores of district court judges with the help of Senator Mitch McConnell, Republican of Kentucky, who as Senate majority leader put a priority on confirming conservative judges.

Senator Chuck Schumer, the New York Democrat and majority leader, said recently that Democrats would be making a concerted effort to move judicial nominees through the Senate to try to offset Mr. Trump’s influence.

He said Democrats “will redress the imbalance that the Trump administration caused by choosing so many judges who were so far hard-right, way out of the mainstream, not just of the American people but even of the Republican Party.”

“Under this Democratic majority,” Mr. Schumer said, “we are going to swiftly and routinely take up President Biden’s appointments to the federal bench to restore some balance.”