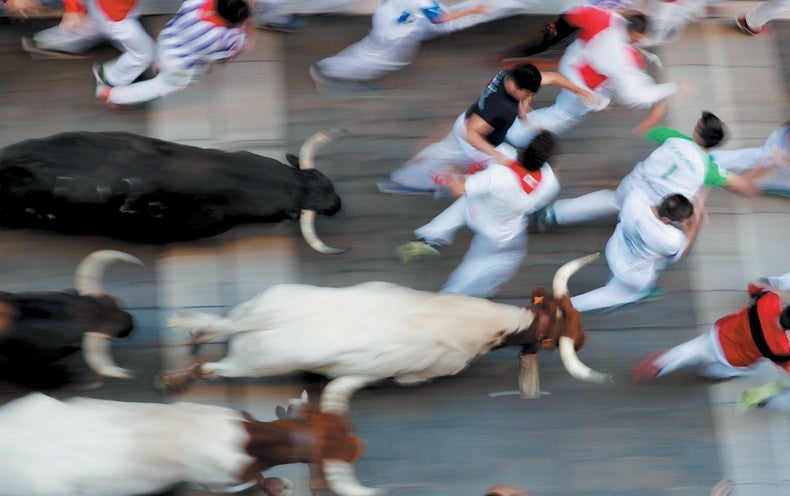 One of the last things a pedestrian wants to see is a charging bull. Yet every July thousands of people voluntarily jam the narrow streets of Pamplona, Spain, to run alongside six agitated fighting bulls. Although the entire course is just half a mile, most runners do not complete it because of the dense crowd and the animals’ breakneck speed. These blistering bovines cover nearly 20 feet per second on average.

This tradition has been criticized as reckless and cruel, and it is increasingly controversial. But for some researchers it presents a fascinating case study of how crowds respond to danger—a difficult scenario to replicate in scientific study. “You cannot make experiments putting people in real danger to see what happens,” notes Daniel Parisi, who studies pedestrian dynamics at the Buenos Aires Institute of Technology. But in Pamplona, he says, people eagerly put themselves in harm’s way.

To gauge runners’ collective response to rampaging bulls, Parisi and his colleagues monitored two 2019 bull runs. They perched cameras along the famed Estafeta Street, where the course narrows like a funnel, and tracked runners’ and bulls’ movements through each recorded frame.

Their findings, published in the Proceedings of the National Academy of Sciences USA, challenge a core tenet of pedestrian dynamics: people slow down when crowd density increases. Like cars crawling through traffic, pedestrians typically reduce speed to avoid bumping into others. A charging 1,300-pound bull, however, flips that relationship on its head. Pamplona runners sped up as they jostled to keep pace with the animals—and avoid their horns. Even with other runners close by, Parisi says, “when a bull is near, they want to run at maximum speed no matter what.”

But these runners can move only so fast. The researchers found that as the bulls caused speed and density to simultaneously increase, faster runners were more likely to become tangled with others and fall. In the past, multiple falls have triggered major pileups that cause injuries and occasionally turn deadly.

Bulls rarely stampede through congested business districts, but Parisi hopes lessons learned from this study will provide insights into how crowds respond to other kinds of dangerous situations. Alethea Barbaro, a researcher at the Delft University of Technology in the Netherlands who was not involved in the study, agrees the findings have real-world implications. Barbaro, who has modeled phenomena ranging from fish migrations to gang territorial disputes, says the Pamplona data could help calibrate models for stressed crowds to aid architectural design and evacuation planning. Plus, she says, “such models would allow emergency response personnel to have insights into potentially averting the crowd-based tragedies that we regularly see in the news.”