Thousands of Christians in Jerusalem participated in celebrations to mark Palm Sunday, the day that begins Holy Week and commemorates when Jesus Christ made a triumphal entry into the city five days before Christians believe religious and civil authorities condemned him to death.

As described in the New Testament, palm leaves and clothes were laid down as a path for Jesus as he arrived on a donkey, which Christians universally believe was the fulfillment of Zechariah 9:9, which prophesied the King of Zion coming “on a colt, the foal of a donkey.” 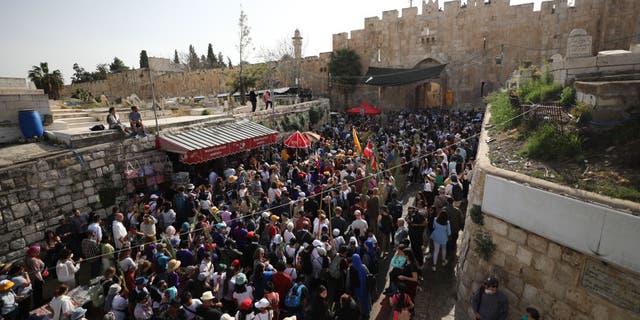 People take part in the Palm Sunday procession in Jerusalem on April 10, 2022. Palm Sunday is celebrated on last Sunday before the ‘Easter’ for triumphal entry of Jesus Christ into Jerusalem and memory of palm branches were placed in his path. (Photo by Mostafa Alkharouf/Anadolu Agency via Getty Images)

The holiday comes as tourists return to the Holy Land following two years of pandemic-related disruption amid rising tensions between Israelis and Palestinians after recent Palestinian attacks in Israel that led to military raids in the occupied West Bank.

Christian worshipers reenacting the event by carrying palm fronds and olive branches marched from the top of the Mount of Olives to the Old City of Jerusalem.

People take part in the Palm Sunday procession in Jerusalem on April 10, 2022. (Photo by Mostafa Alkharouf/Anadolu Agency via Getty Images)

The Christians also made their way from the Mount of Olives past the Garden of Gethsemane, where Jesus prayed to God and was betrayed, according to the New Testament. The procession ultimately winded its way through the Old City.

The solemn entrance of the Lord was a “fulfillment of ancient prophecy” and a “declaration that Christ was the long-awaited anointed savior,” Fr. Jeffrey Kirby, pastor of Our Lady of Grace Catholic Church in Indian Land, South Carolina, and adjunct professor at Belmont Abbey College in North Carolina, shared with Fox News Digital by email.