Packs of Hunting Spiders Are Guided by Web Vibrations 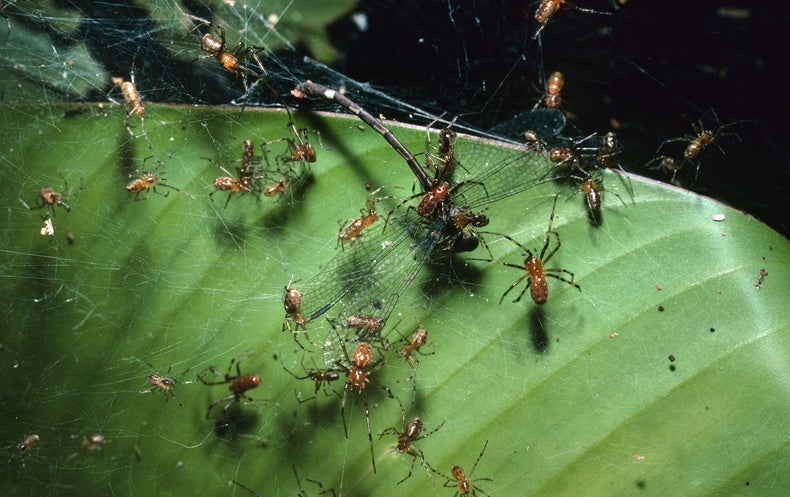 Pack hunting spiders exist in places other than your nightmares. While most spiders enjoy solitary lives, 20 of the roughly 50,000 known spider species live in colonies. One species, Anelosimus eximius, lives in extremely large colonies of up to 1,000 individual spiders that work together to build webs spanning several meters. When prey falls into their web, these social spiders coordinate and attack their victim together, which allows them to take down much larger prey than they could if they hunted alone. Until now, exactly how these spiders carry out such coordinated attacks was a mystery.

It turns out, the spiders use vibrations in their mega-web to choreograph a synchronized swarming process, the study found.

“What is fantastic is that there is no leadership role among these spiders,” said Raphael Jeanson, a researcher at the Research Center on Animal Cognition (CRCA)  at the University of Toulouse in France and senior author on a new study about the social arachnids. Rather, the entire spider colony coordinates its attack with each individual receiving the same information.

As the colony attacks, the spiders descend on their prey by synchronizing two movement stages: closing in on their struggling victim and standing still. This allows the spiders to time their approach so that all of them strike at once.

Using both field observations and computer simulations of this coordinated attack, Jeanson’s team learned that the attack is directed almost entirely by vibrations in the shared web.

“When the prey falls in the web, this triggers the movement of the spiders,” Jeanson told Live Science. “But after a while, they all stop for a few milliseconds before they start moving again.”

By luring the spiders with a dead fly glued to the end of a vibration generator, the researchers showed that hunting behavior was, in fact, triggered by the struggling of helpless prey. However, that didn’t explain the colony’s coordinated movements.

For that, scientists needed a computer model. The models revealed that while the prey vibrations might trigger the initial movement, it was the vibrations made by the spider colony that enabled the predators to coordinate their attack. As each spider sensed vibrations from the prey, they started walking. But the steps of hundreds of spiders converging on a struggling insect also sent vibrations through the web’s fibers, and muddied the sounds of a trapped meal.

“It’s a bit like when you are in a room with people chatting,” said Jeanson. To a spider, every step it takes makes noise. They then have to stop moving so they can listen for the prey, to make sure they are still heading in the right direction.

The quieter the struggling prey is, the harder it can be for the spiders to coordinate their stop-and-go movements. When the researchers vibrated the web and then removed the lure, the colony responded by moving toward the prey, but then every spider had to stop moving to “listen” for telltale signs of squirming. If the prey was vibrating more intensely, the colony didn’t need to be as quiet, so they were less synchronized, the scientists discovered

This study was published March 7 in the journal Proceedings of the National Academy of Sciences.

Copyright 2022 LiveScience, a Future company. All rights reserved. This material may not be published, broadcast, rewritten or redistributed.