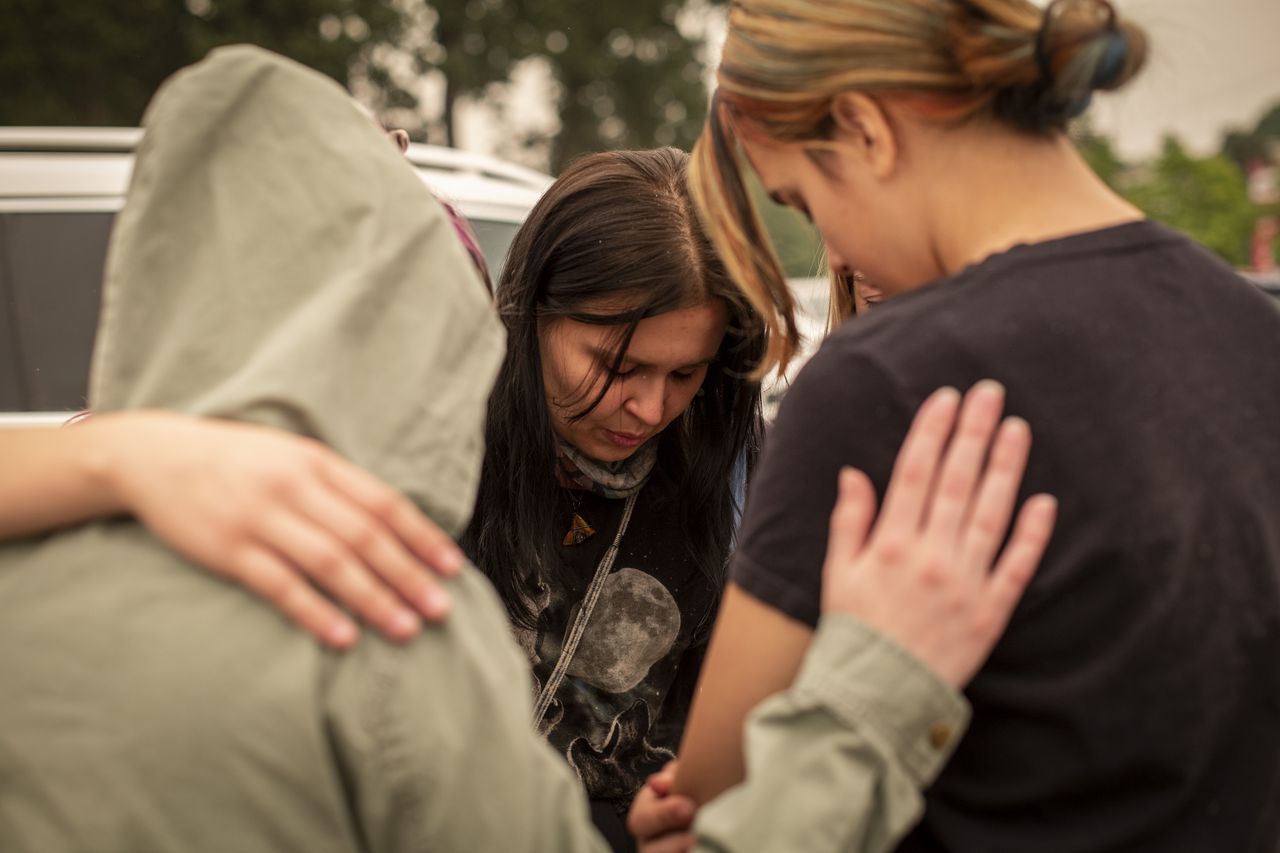 As many as 3,000 firefighters battled 48 blazes across Oregon on Wednesday as Gov. Kate Brown said the state will likely experience the greatest loss of property and lives from wildfires in its history.

“Everyone must be on high alert,” she said. “The next several days are going to be extremely difficult.”

Brown said about 500 square miles across Oregon, a total footprint approximately the size of Hood River County, had gone up in flames since Monday night.

Brown declared a statewide emergency Tuesday, the first time she has done so for wildfires. The fires were affecting those living in or near all the state’s major population centers along Interstate 5, from Medford to Portland.

On Wednesday afternoon, a Marion County family reported the fires’ first fatalities: a boy and his grandmother. The Jackson County Sheriff’s Office reported that a third person had died, saying Ashland police are investigating a death related to the Almeda fire. The agency did not immediately provide more details.

Hundreds of thousands of acres were burning near Mount Hood, in southern Oregon, east of Salem, east of Eugene, on the border of Washington and Yamhill counties and on the Warm Springs Reservation.

Brown said the state as a whole is a tinderbox with the most extreme fire conditions in three decades.

The governor and state forestry officials said the combination of dry weather and high winds helped the blazes grow quickly.

Doug Grafe, chief of fire protection at the Oregon Department of Forestry, said winds blowing from the east into canyons and other low spots fed many of the fires.

Gusts were strongest Monday evening but slowed by Wednesday and, by Thursday, are expected to revert to their normal pattern of blowing in from the Pacific Ocean.

Although the state has plenty of helicopters and planes to battle fires from the air, it has not been able to safely fly them due to the winds gusting up to 50 mph and low visibility, Grafe said. And fires burning in Washington, Oregon and California have strained national firefighting capabilities.

Andrew Phelps, director of the Oregon Office of Emergency Management, urged people who are not under evacuation orders to stay home and off roads to make it easier for those fighting and fleeing forest fires to travel speedily.

He also cautioned Oregonians against calling 911 unless it was a genuine emergency.

Here is how the week’s wildfires unfolded across the state as of Wednesday evening.

Hundreds of people poured into the Oregon State Fairgrounds as wildfires in the foothills of the Cascade Mountains pushed ash into the sky and burned down entire communities. The Santiam and Lionshead fires, which tore through roughly 200,000 acres in 72 hours, are the state’s largest.

Residents of Gates, a city of 500 near the border of Marion and Linn counties, said their hometown was all but destroyed. The town’s school, as well as the mayor’s house, were leveled.

Barb Mahlum fled the flames as they destroyed her home.

“This is a nightmare. It was my dream house and it’s gone,” she said.

It’s unclear how many people escaped the fires but county commissioners said the fairgrounds served 350 breakfasts to people sheltering there Wednesday.

The Marion County Sheriff’s Office announced Oregon 22 east of Salem was closed at Milepost 13 in both directions as crews mounted search and rescue efforts in the Santiam Canyon area.

Sheriff Joe Kast said his deputies poured into the wooded region in the days leading up to the blaze, informing hikers, hunters and campers on the Pacific Crest Trail and in the Mount Jefferson Wilderness about chaotic conditions conducive to rapidly spreading fire.

Thousands have been told to evacuate in southern Oregon as strong winds fed the Almeda fire, which carved a path of destruction through the towns of Talent and Phoenix. The fire also edged into the southern part of Medford on Wednesday.

The fire destroyed hundreds of homes and wiped out businesses in a region home to more than 80,000.

The Medford Mail Tribune reported that Jackson County Sheriff Nate Sickler said the agency had found human remains in the area where the Almeda fire started, and that they were in the early stages of an active criminal investigation.

Jackson County Sheriff’s Office spokesman Mike Moran later confirmed to The Oregonian/OregonLive that deputies were assisting Ashland police with a death investigation tied to the fire. Moran said he did not have any other information about the case.

Sandra Spelliscy, city manager of Talent, with a population of about 6,465, said she saw breathtaking destruction as she toured the community.

One had about 65 homes. They were all destroyed. A second had 160 homes, of which 21 survived.

The city was blocked off to keep residents from returning due to the fire danger.

Among the evacuees late Tuesday in Jackson County were about 950 residents at the sprawling Rogue Valley Manor retirement and care community on Medford’s southern end. The facility provides housing to 825 people who live independently, plus an additional 125 people in assisted, nursing or dementia care.

“Water supplies are good. There are no power interruptions,” he said. “We are doing well overall at this point if people just carry on their business and be prepared like we are now.”

Wildfires in Clackamas County destroyed at least 22 structures including some homes since Sunday and threatened at least 600 more as thousands were forced to evacuate their homes.

The entire county is under some level of evacuation warning with about half the county, including the communities of Estacada and Molalla, under a Level 3 “go now” evacuation order.

The Riverside fire, which began near the Riverside campground along the Clackamas River, grew to more than 112,000 acres Wednesday after moving about 17 miles Tuesday.

The other three major fires burned through a combined 2,500 acres as of Wednesday morning, Charlton said. His agency wasn’t yet focused on figuring out how the fires began but said at least one blaze that destroyed two structures was caused by people.

A 10-acre brush fire off Oregon 213 and Spangler Road started Tuesday night after an RV pulling a Jeep emitted sparks and caught fire, according to the county sheriff’s office.

Nancy Bush, director of disaster management for the county, said Wednesday that officials had made contact with 16,000 households regarding evacuations, although some of them may be duplicates.

The county set up an evacuation check-in site at Clackamas Community College. Limited shelter space was also being provided there and at Oregon City High School.

The Oregon Conference Headquarters of Seventh-day Adventists, Clackamas Town Center and the Milwaukie-Portland Elks Lodge No. 142 were all allowing people in RVs to park on their properties.

The Clackamas County Fairgrounds announced Wednesday afternoon that the grounds were full and could no longer accept displaced livestock.

A massive wildland fire outside one of Oregon’s largest cities consumed more than 100,000 acres in Lane County on Wednesday, tearing through small towns, forcing thousands to flee their homes and scorching a scenic wonderland beloved by outdoor enthusiasts.

The Holiday Farm fire pushed along Oregon 126 and came within a dozen miles of the Eugene-Springfield area. The blaze decimated the community of Blue River, home to some 800 people.

The fire began Monday near Blue River, about 50 miles east of Eugene. The cause remained unknown and the fire was uncontained. About 190 firefighters had been mobilized against the blaze, far fewer than the 1,000 needed for a fire its size, according to state and county officials.

“They’re just spread so thin across the state,” Buch said. “Were just making do with what we have.”

Officials ordered evacuations in the Mohawk Valley north of the McKenzie River and east of Marcola Road.

County officials expect to hear about fatalities but none were reported as of early Wednesday evening. At least 3,000 people in Lane County were displaced by the blaze.

Two large fires burning in the coastal county, the Echo Mountain fire and the Kinberling fire, together grew to about 1,000 acres Wednesday, officials said. The blazes were driven west by winds of 30 to 50 mph.

An ember ignited a grassfire at the Chinook Winds golf course in the north of Lincoln City as well. Samaritan North Lincoln Hospital, which was at Level 2 “be set to go” orders, was shut down. Officials closed the hospital at 9 a.m. and moved its patients to Newport.

County officials ordered anyone living north of Northwest 40th Street in the county seat — near the Chinook Winds Casino Resort — to leave immediately. That included anyone between the coast and East Devil’s Lake Road, plus residents with addresses on that street.

Fires closed Oregon 18 at Milepost 7, and U.S. 101 was closed from Gleneden Beach to Lincoln City.

Fires burned on both sides of Oregon 18 near Otis.

A five-alarm fire in rural Washington and Yamhill counties forced the evacuation of as many as 150 homes Tuesday night.

By late in the evening, firefighters established a fire line at Northeast Mountain Top Road. At least three barns caught fire but no homes had burned.

The fire created anxiety for residents of Newberg, the nearest city. It was also close enough to George Fox University that officials sought advice from local law enforcement officials whether they should gear up their evacuation plan.

Officials in Washington County said a separate fire torched as many as 2,000 acres and is so far 50% contained. A smaller fire near Henry Hagg Lake, estimated at about 50 acres, was also 50% contained.

The Yamhill Valley News-Register reported that the fairgrounds in McMinnville began boarding animals after facilities in Marion, Clackamas and Polk counties filled up.