On the Verge of Extinction, These Whales Are Also Shrinking 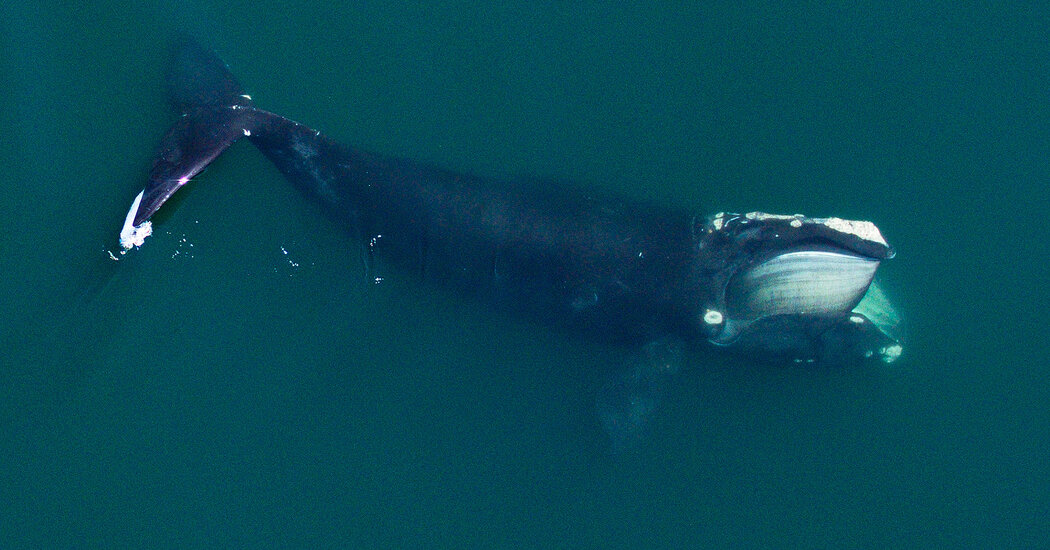 North Atlantic right whales are struggling to survive, and it shows.

Most of the 360 or so North Atlantic right whales alive today bear scars from entanglements in fishing gear and collisions with speeding ships and, according to a new study, they are much smaller than they should be.

Scientists recently examined how the size-to-age ratios of right whales living in the North Atlantic have changed over the past 40 years and found that the imperiled whales are significantly smaller than earlier generations of their species.

Their research, published Thursday in the journal Current Biology, suggests that human-induced stressors, primarily entanglements, are stunting the growth of North Atlantic right whales, reducing their chances of reproductive success and increasing their chances of dying. Unless drastic measures are taken to reduce these stressors, the authors say, the whales may not be around much longer.

Using this data, scientists, including Joshua Stewart, a quantitative conservation ecologist with the National Oceanic Atmospheric Administration and lead author of the new study, recently assessed how the whales’ ratio of age to size has changed.

By tracking 129 previously identified whales whose ages were known, Dr. Stewart and his colleagues found that the animals’ lengths have declined by roughly 7 percent since 1981, which translates to a size reduction of about three feet.

Although an average size decrease of three feet may not seem like much given these whales can reach 52 feet in length, many of the whales observed in the study exhibited extreme cases of stunted growth.

Right whales undergo dramatic growth spurts during their first few years of life and approach their maximum size around age 10. Seeing so many adult whales the size of juveniles “was shocking,” Dr. Stewart said.

Entanglement in fishing gear is an ever-present threat for the mammals and one of the primary drivers of their decline.

Thousands of tons of fishing gear — mostly traps and pots used to catch lobster and crab — are present in right whale migration routes and feeding grounds in the United States and Canada. Some of this gear can weigh thousands of pounds and have buoys that prevent entangled whales from diving deep enough to find food. Whales who don’t drown or starve right away will often drag gear for several years. Doing this can create deep lacerations in the whales’ soft flesh and sap energy from essential processes such as reproduction and, the researchers suspect, growth.

“What we think is going on here is that dragging these big trailing heaps of gear is creating all this extra drag, which takes energy to pull around, and that’s energy that they would probably otherwise be devoting to growth,” Dr. Stewart said.

While diverting energy away from growth may help individual whales survive in the short term, the fact so many are forced to do so spells trouble for the survival of the species as a whole.

“​Smaller right whales are less resilient to climate change as they do not have the nutritional buffer they need to adapt during lean food years,” said Amy Knowlton, a senior scientist at the New England Aquarium and co-author of the study. “Other studies have shown that smaller whales are not as reproductively successful since it takes a tremendous amount of nutritional resources to first get pregnant, nurse a calf for a year and then recover to be able to get pregnant again.”

With only a few hundred North Atlantic right whales left, fewer than 100 of which are breeding females, the species can hardly afford declines in its birthrate. Additionally, there is evidence to suggest that smaller whales are more likely to die as a result of entanglement than larger ones. Given the combination of these factors, the researchers say, time may be running out.

“The future, if all stressors remain, is not encouraging,” said Rob Schick, a research scientist at Duke University who was not involved in the study. Yet, he added, “this population has recovered from very small numbers before, so it’s not completely grim. But it’s clear to me, the cumulative stressor burden must be lowered to ensure survival.”

According to the authors of the new study, the best way to ensure the continued survival of the species is to pressure fishery managers in the United States and Canada to significantly reduce the amount of rope-based fishing gear and implement ship speed limits in the North Atlantic.

“We all consume goods moved by sea, and many eat lobsters,” said Michael Moore, a senior scientist with the Woods Hole Oceanographic Institution and co-author of the study. “If we all were to demand these management changes of our elected officials the situation would change dramatically.”