On the Space Station, U.S. and Russian Astronauts Steer Around the War in Ukraine 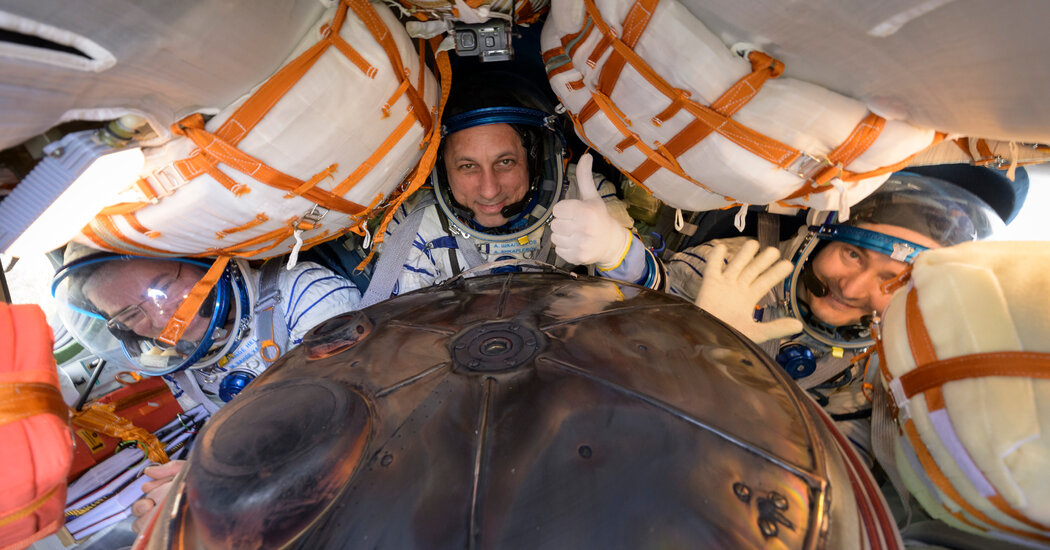 Mark Vande Hei, a NASA astronaut, returned to Earth on Wednesday with two Russian counterparts, landing in Kazakhstan after he spent 355 days in space.

Mr. Vande Hei and his Russian crewmates, Anton Shkaplerov and Pyotr Dubrov, flew home together in a Russian spacecraft, guided by Russian flight controllers. After touching down on a grassy plain at 5:28 p.m. local time, or 7:28 a.m. Eastern time, Mr. Vande Hei was met by a contingent of NASA and Russian personnel, a close collaboration between the two space agencies that has continued despite Russia’s deadly invasion of Ukraine and the tensions it has caused between Moscow and the West.

The three men emerged in a world where cooperation between Russia and the United States to preserve the future of the International Space Station can no longer be taken for granted.

The space station was meant to be a marvel of peaceful post-Cold War amity between Moscow and Washington, drawing Russia into the community of international collaboration and preventing Russian rocket engineers from selling expertise to countries like North Korea seeking to build better missiles.

But in the past month, Russia has faced withering sanctions, condemnation and growing isolation from Western nations. President Biden harshly condemned President Vladimir V. Putin for the invasion.

NASA has tried to stay above the fray for the past month with minimal statements saying that operations on the space station are unaffected. And the astronauts say publicly that they are inclined to steer around the rupture between their governments. But the ongoing military conflict could test NASA’s ability to continue working with Roscosmos, the state corporation that runs Russia’s space activities.

In Kazakhstan on Wednesday, the Soyuz capsule landed upright, but as often happens, winds dragged the parachute and pulled the capsule over on its side. Within half an hour, recovery teams helped all three astronauts out of the Soyuz.

After a journey of 5,680 orbits of Earth that stretched more than 150 million miles, Mr. Vande Hei was greeted by NASA flight doctors, public affairs officials and representatives from the astronaut’s office and the space station management.

The astronauts first sat outside, drinking tea during initial medical tests. Mr. Vande Hei smiled broadly and gave a thumbs up before putting on a protective mask. He took off a pair of sunglasses, commenting that it was a beautiful day. As he and the two Russian crew were carried into an inflatable tent for more medical checks, Mr. Vande Hei spoke with someone on a satellite phone.

Following their stay in the tents, the astronauts were to take a two-hour flight on Russian helicopters to the city of Karaganda. There Mr. Vande Hei and the American delegation were expected to a board a NASA Gulfstream jet and head back to the United States, with one stop in Germany for refueling.

While NASA and Roscomos worked together Wednesday to bring their crew members back from orbit, their cooperation was preceded in recent weeks by bellicose outbursts from Dmitry Rogozin, who leads the Russian space program. He shared a video on Twitter that suggested the Russians might leave Mr. Vande Hei behind.

NASA officials have carefully sidestepped what Mr. Rogozin has said and insisted that nothing has changed.

On Tuesday, Mr. Shkaplerov, one of the returning Russian astronauts, turned over command of the space station to Tom Marshburn of NASA. “We are one crew,” Mr. Shkaplerov said during the ceremony, which ended with hugs.

While NASA remains mum, Scott Kelly, a retired astronaut who held the record for consecutive days in space by an American until Mr. Vande Hei passed it recently, feuded on Twitter this month with Mr. Rogozin. He stopped at NASA’s request.

Outside of the space station, Russian and European cooperation has all but collapsed since the Russian invasion of Ukraine. The European Space Agency postponed a rover mission to Mars because it relied on a Russian rocket. And a British satellite internet company, OneWeb, canceled a series of launches that used Russia’s Soyuz rockets, shifting some of them to SpaceX rockets. Russia also said it would cease cooperative science experiments with Germany conducted on the Russian part of the space station. A German astronaut, Matthias Maurer, is currently a member of the crew.

Orbital construction of the International Space Station, a cooperative venture between the United States, Russia, Europe, Japan and Canada, began in 1998 with the launch of the module Zarya. Financed by NASA and built by Russia, it is actually part of the NASA-led half of the space station reflecting American foreign policy at the time, which sought to sustain Russia’s space program during the economic tumult after the collapse of the Soviet Union. Russian and American astronauts permanently moved into the fledging space station on Nov. 2, 2000, and it has been continuously occupied by rotating crews of astronauts ever since.

The Russian and NASA-led segments of the station are separate but tightly connected. The Russians rely on American solar panels for power while Russian cargo ships provide periodic boosts to keep the station from falling into the atmosphere. It is “not really an operation that you can separate and go your own way,” said Joel Montalbano, the program manager for the space station at NASA, during a news conference a couple of weeks ago.

Mr. Montalbano said of the conflict in Ukraine, “We’re aware of what’s going on, but we are able to do our jobs to continue operations.”

The astronauts also may be circumspect when talking with one another in orbit. In February, before Russian troops entered Ukraine, Mr. Vande Hei told KARE, a Minnesota television station, that the crew got along “fantastically” and that Ukraine was not a frequent topic of conversation.

“All I can say is we haven’t talked about that too much,” Mr. Vande Hei said. “I’m not sure we really want to go there.”

But Mr. Kelly, who spent 340 days on the space station in 2015 and 2016, said that if he were still in orbit, he would likely discuss the conflict with his Russian counterparts.

“Russia moved into Syria when were there,” he said in an interview. He and his Russian crewmates even talked about the possibility of direct armed conflict between the United States and Russia but it was at an abstract, not personal level.

“We all recognizee what was important to us at that time was supporting each other,” Mr. Kelly said. “Literally relying on each other for our lives if the situation warranted.”

In an interview recorded last week but streamed on NASA Television on Wednesday, Mr. Vande Hei referred indirectly to the war in Ukraine.

“This is a very challenging time for international relations,” Mr. Vande Hei said. “My hope is that in our attempt to further and find peace throughout the world, that these type of connections that we have can be maintained and serve as a path forward.”

April will be a busy month of comings and goings at the space station. As early as April 6, private company, Axiom Space of Houston, will lead three space tourists to the orbital lab. They paid $55 million each for the experience.

Later in April, another crew of four astronauts — three from NASA, one from Italy — are to launch on SpaceX’s Falcon 9 rocket to the space station.

The longer-term future of the International Space Station remains unclear. The current agreement between the partner nations extends through 2024. NASA would like to extend operations until 2030 as it tries to support companies that want to launch future commercial outposts in orbit. Russia has not agreed to the extension, suggesting that it might want to set off on its own instead. It may also seek to collaborate with China in space.

However, it is unclear how much Roscosmos can do with limited financing that will get tighter as it cuts off contracts from foreign countries.

Russia also no longer brings in money flying NASA astronauts to orbit. For nearly a decade after the space shuttle was retired, Russia’s Soyuz was the only way Americans could get to and from the space station. NASA now uses on SpaceX’s Crew Dragon capsule, and a second spacecraft by Boeing, Starliner, could start flying astronauts late this year.

NASA would still like to fly some of its astronauts on the Soyuz, but instead of paying for the flights, it wants to trade seats on the American spacecraft for Russian astronauts. While Russian astronauts are still training in Houston, NASA and Roscosmos have not yet completed an agreement for such a swapping of seats. And negotiations have been slowed by other U.S.-Russian disputes, including the aftermath of a Russian antisatellite weapon test in November.

Mr. Vande Hei and his Russian crewmates won’t only be adjusting to the world’s changing geopolitics. It might take a little while to get used to gravity again.

Mr. Kelly said the most striking effects were in his cardiovascular system, with blood and fluid pooling in his lower legs.

“I can’t speak for everyone else, but that was the most troubling thing” he said. “Standing up and just physically seeing your ankles get like twice as big.”