Older Children and the Coronavirus: A New Wrinkle in the Debate 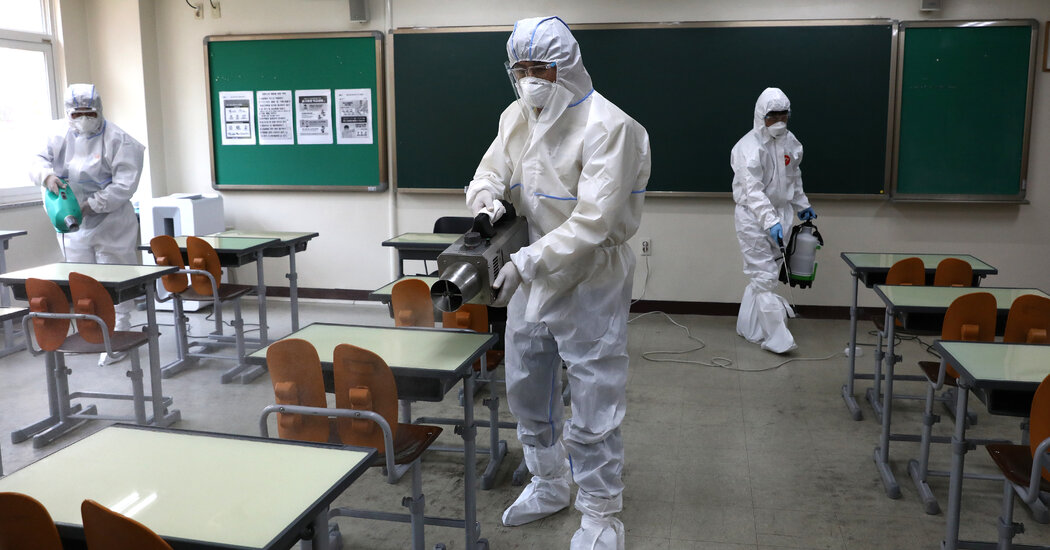 A study by researchers in South Korea last month suggested that children between the ages of 10 and 19 spread the coronavirus more frequently than adults — a widely reported finding that influenced the debate about the risks of reopening schools.

But additional data from the research team now calls that conclusion into question; it’s not clear who was infecting whom. The incident underscores the need to consider the preponderance of evidence, rather than any single study, when making decisions about children’s health or education, scientists said.

The disclosure does not negate the overall message of that study, experts said: Children under age 10 do not spread the virus as much as adults do, and the ability to transmit seems to increase with age.

“The most important point of the paper is that it clarifies the care with which we need to interpret individual studies, particularly of transmission of a virus where we know the dynamics are complex,” said Dr. Alasdair Munro, clinical research fellow in pediatric infectious diseases at University Hospital Southampton in Britain.

The earlier study was not intended to demonstrate transmission from children to adults, only to describe contact tracing efforts in South Korea, said Dr. Young June Choe, assistant professor of social and preventive medicine at Hallym University College of Medicine and an author of both studies.

Most studies of children’s transmissibility have been observational and have not directly followed infected children as they spread the virus. The few studies to have done so are not directly comparable — their methods, the policies regarding prevention, and the transmission levels in communities all vary widely.

Many studies have grouped together children of widely varying ages. Yet a 10-year-old is likely to be very different from a 20-year-old in terms of infection risk and transmission, as well as in type and level of social activity, Dr. Munro said.

The first study from South Korea did try to document transmission from children directly, but it grouped them in 10-year ranges. Tracing the contacts of 29 children aged 9 or younger, it found that the children were about half as likely as adults to spread the virus to others, consistent with other research.

But Dr. Choe and his colleagues reported an odd finding in the group of 124 children aged 10 to 19: They appeared significantly more likely than adults to spread the coronavirus. Experts told The Times at the time that the finding was likely to be a fluke.

The group of older children was not the same in both studies, but many appeared in both reports, Dr. Choe said. In the latest study, the researchers found only one undebatable case of transmission among older children, from a 16-year old girl, who had returned from Britain, to her 14-year-old sister.

The remaining 40 infected contacts of the older children could all be explained by a shared exposure.

The children with confirmed infections were isolated in hospitals or community treatment centers, and caregivers who had contact with them were required to wear masks, gloves, a full body suit and goggles. The low rate of transmission from older children observed here may not represent what happens in the real world.

The new report does suggest that older children are at least unlikely to transmit more than adults, said Natalie Dean, a biostatistician at the University of Florida, as had been originally claimed.

“There’s no biological explanation for that,” she said. “It didn’t make any sense to me.” Over all, Dr. Dean added, “We’re not seeing a lot of real transmission from children.”

But that may be because most studies have been too small to adequately distinguish between age groups, and because children have been kept at home, away from potential exposures.

Even if the risk of transmission from children is lower, they usually have contact with a great number of other people — more so than the average adult. When schools reopen, these increased exposures create more opportunities to transmit the virus, which may counterbalance their lower propensity to transmit the virus.

The latest on how schools are navigating the pandemic.

Dr. Dean and other experts cautioned against interpreting the scientific evidence so far as saying that children under age 10 simply cannot spread the coronavirus.

But “it’s not true to say that they do not transmit,” said Bill Hanage, an epidemiologist at the Harvard T.H. Chan School of Public Health. “You hear people say this, and it’s wrong.”

All available evidence so far makes it clear that older children, particularly those closest to adulthood, may spread the virus as much as adults, he added.

“It’s indisputable that the highest risk of becoming infected and being detected as being infected is in older age groups,” Dr. Hanage said. “I think you have to be really careful before you decide to open high schools.”

Conversations about reopening schools are complicated because so much depends on the level of community transmission and on socioeconomic factors, he and other experts said.

Schools can fuel the influenza virus’s spread to a disproportionate degree, compared with restaurants, bars or places of worship. Children may drive those outbreaks, so closing schools during flu outbreaks makes sense, Dr. Hanage said.

But with the coronavirus, Dr. Hanage said, “closing schools is not expected to provide more bang for the buck than closing other parts of society.” Instead of reopening bars and restaurants along with schools, he said, schools should be prioritized, while bars and restaurants should be closed in order to reduce community transmission and make school reopenings possible.