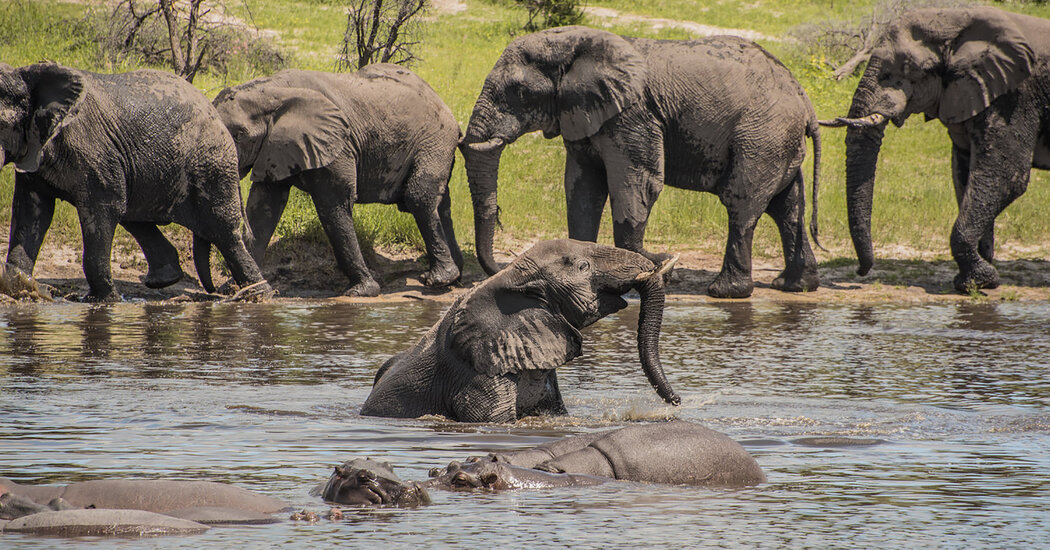 For years, scientists assumed that when it came to elephants on the African savanna, matriarchs were the only leaders. Old males, on the other hand, were seen as solitary loners whose social contribution ended at breeding. New evidence suggests that male elephants do have social lives, and that older males may act as leaders for younger ones.

“These findings build on support that’s slowly being revealed about the importance of old bulls,” said Connie Allen, a doctoral researcher in animal behavior at the University of Exeter in England, and lead author of a study published on Thursday in Scientific Reports. “This is the first study that concretely shows older bulls in a leadership role.”

Little research has focused on male elephants — which can live 60-plus years — because males tend to roam across vast distances. This makes them difficult to track and observe. A few studies have hinted, though, that there is more to males than assumed.

For example, from 1992 to 1997, young orphaned male elephants that had been introduced to Pilanesberg National Park in South Africa began coming into premature musth, a temporary state of heightened aggression and sexual activity. When females rejected the adolescents’ advances, the young males took their aggression out on white rhinos, killing more than 40. Seeking a solution, researchers introduced six older male elephants to the park. The younger males’ musth subsided, and the rhino killing stopped.

Scientists have also found that male elephants of all ages prefer to have the oldest males as their closest neighbors, possibly because of opportunities to learn, and that younger males seem to learn how to raid crops from older males.

Ms. Allen and her colleagues based their study in Botswana’s Makgadikgadi Pans National Park, where 98 percent of the elephants are males. No one knows why the park’s sex ratio is so skewed, although environmental pressure might be pushing males to gather on the fringes of the country’s more northerly elephant stronghold.

The researchers set up camera traps along seven pathways where elephants routinely traveled alone or in a single file line. In thousands of hours of footage, they were able to identify more than 1,000 individual male elephants, whose age they estimated according to body characteristics.

Their analysis revealed that adolescent males almost always traveled with other males, and that older bulls were most likely to be found at the head of the line. The elephants otherwise did not follow a strict age-related pecking order, suggesting that older males are acting as leaders.

Because of their larger tusks, older bulls tend to be targeted by both poachers and trophy hunters. Trophy hunters have justified this by pointing to the assumption that male elephants are redundant for a population. The new findings, however, “underline the dire consequences of removing the oldest, largest males from elephant populations,” said Karen McComb, an animal behavior scientist at the University of Sussex in England, who was not involved in the study.

In the absence of older bulls, younger ones would probably still be able to navigate a habitat by using well-worn paths to water, said Chris Thouless, head of research at Save the Elephants, a conservation organization. But older animals could be crucial to more critical knowledge, such as where to find water during a prolonged drought, or how to evade poachers. “That’s much more difficult to test, but more directly related to the question of the value of age,” Dr. Thouless said.

Graeme Shannon, a zoologist at Bangor University in Wales, who was also not involved in the study, added that the findings do not establish whether older males are actively leading the group or just tolerating the younger males. But they might still be imparting “crucial social knowledge,” he said, such as “how to behave and succeed.”

“There remains lots of questions to answer, but this research provides further evidence of the importance of these older male elephants in elephant society,” Dr. Shannon said.