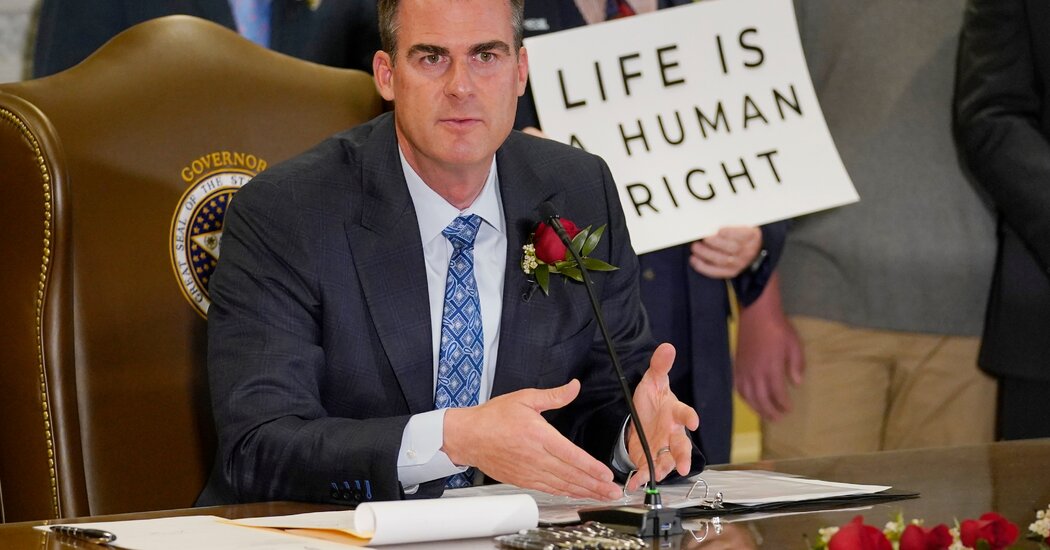 Gov. Kevin Stitt of Oklahoma signed a bill into law on Wednesday that bans nearly all abortions starting at fertilization. The new law, expected to take effect immediately, is the most restrictive abortion ban in the country.

The law makes exceptions in cases where an abortion is necessary to save the life of the mother, or in cases of rape or incest if they have been reported to law enforcement.

“From the moment life begins at conception is when we have a responsibility as human beings to do everything we can to protect that baby’s life and the life of the mother,” Mr. Stitt said after signing the bill into law. “If other states want to pass different laws, that is their right, but in Oklahoma we will always stand up for life.”

Passed by the Oklahoma Legislature last Thursday, the law relies on civilian enforcement to get around the constitutional right to abortion that was enshrined by the landmark Roe v. Wade decision, a ruling the U.S. Supreme Court is expected to overturn in the coming weeks.

State officials cannot bring charges. The law instead allows private citizens to sue abortion providers or anyone who “aids and abets” an abortion. Successful lawsuits in civil court yield at least $10,000 in damages.

The civil suit enforcement mechanism allows the law to sidestep court challenges that have blocked abortion bans in the past. The Oklahoma ban is modeled after a Texas law that allows individuals to sue abortion providers who provide the procedure after cardiac fetal activity is detected, about six weeks into pregnancy. The Supreme Court declined to block the enforcement of that law, and Oklahoma passed a similar six-week ban weeks ago.

While few, if any, civil suits have been filed in Texas, clinic operators say that the threat of lawsuits effectively shuts down abortion providers who fear the legal risk.

Republican-led states are paring back abortion rights ahead of an expected decision by the Supreme Court to overrule Roe v. Wade. A draft opinion that was leaked this month indicated the justices would most likely overturn Roe in a decision about a case involving a Mississippi law that bans abortion after 15 weeks of pregnancy.

“This is where states have been heading for decades. A total or really a total abortion ban,” said Elizabeth Nash, a state policy analyst for the Guttmacher Institute, which supports abortion rights. “This signals to other states that they, too, can ban abortion.”

Abortion providers and advocacy groups have said the Oklahoma ban will lead to a strain on clinics in other states as patients are forced to seek abortions elsewhere. After Texas passed its ban, women there flooded into Oklahoma for abortions.