Ohio Man Was on the F.B.I.’s Radar for Months 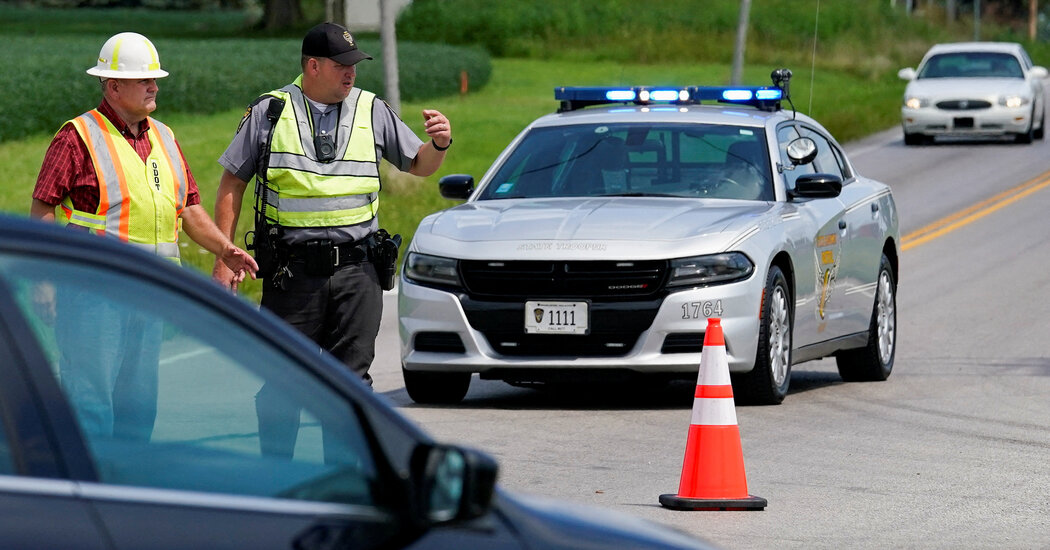 COLUMBUS, Ohio — A man whom the police say they killed hours after he tried to breach the F.B.I.’s Cincinnati office had been on the radar of the federal authorities for months, two law enforcement officials said on Friday.

The officials said federal investigators had been looking into whether the man, Ricky Shiffer, 42, of Columbus, had been involved in the Jan. 6 attack on the U.S. Capitol.

Law enforcement officials separately said they were investigating whether Mr. Shiffer appeared in a video posted on Facebook on Jan. 5, 2021, showing him attending a pro-Trump rally at Black Lives Matter Plaza in Washington the night before the Capitol was stormed.

The authorities said Mr. Shiffer, who was wearing body armor, tried to breach the entrance to the visitor screening facility of the bureau’s Cincinnati office on Thursday morning, but fled after an alarm was set off and agents responded. He was later spotted by a state trooper on a nearby interstate and chased into a rural area, where officers fatally shot him that afternoon after a lengthy standoff.

State and federal officials said little publicly on Friday about the circumstances of the attack at the F.B.I. office or Mr. Shiffer’s motivations, even as online posts suggested he was a supporter of former President Donald J. Trump who had reacted with outrage when federal agents searched Mr. Trump’s Florida home earlier this week.

Making a case against Trump. The House committee investigating the Jan. 6 attack is laying out a comprehensive narrative of President Donald J. Trump’s efforts to overturn the 2020 election. Here are the main themes that have emerged so far from eight public hearings:

Pressuring Pence. Mr. Trump continued pressuring Vice President Mike Pence to go along with a plan to overturn his loss even after he was told it was illegal, according to testimony laid out by the panel during the third hearing. The committee showed how Mr. Trump’s actions led his supporters to storm the Capitol, sending Mr. Pence fleeing for his life.

A day after that search, someone with an account bearing Mr. Shiffer’s name posted messages on Mr. Trump’s social media platform, Truth Social, recommending that “patriots” go to Florida and kill federal agents. On Thursday, the same account also appeared to confess to an attack on the F.B.I.

In a series of recent posts, the account had railed against law enforcement and issued a “call to arms,” saying that for two years, “They have been conditioning us to accept tyranny.” When someone asked whether he was proposing terrorism, the account responded: “I am proposing war.”

The New York Times could not immediately confirm whether the Truth Social account, or other social media accounts, belonged to Mr. Shiffer.

The attack in Ohio came during a week when many Republicans had criticized the F.B.I. for the search of Mr. Trump’s home, with some calling it a dangerous weaponization of the Justice Department. Some figures on the right also issued broader calls for violence and civil war.

On Thursday evening, Christopher A. Wray, the F.B.I. director, defended the bureau and decried attacks on law enforcement.

“Unfounded attacks on the integrity of the F.B.I. erode respect for the rule of law and are a grave disservice to the men and women who sacrifice so much to protect others,” Mr. Wray said. “Violence and threats against law enforcement, including the F.B.I., are dangerous and should be deeply concerning to all Americans.”

Mr. Shiffer had served in the Florida Army National Guard as a younger man, military records showed, and had worked as an electrician in Ohio more recently, according to his former company. Online records suggested that Mr. Shiffer had ties to several other states, including Nebraska, but it was not clear when or how long he had lived there. In 2016, he made a $250 contribution to Mr. Trump, according to federal elections records.

Federal investigators said they were scrutinizing Mr. Shiffer’s social media accounts. On Tuesday, a Truth Social account in the name of @rickywshifferjr posted a message encouraging people to go to Florida, where, as he wrote, “Mar A Lago is.”

“I recommend going, and being Florida, I think the feds won’t break it up,” the message read. “IF they do, kill them.”

Though the Ohio State Highway Patrol provided a detailed account of the police chase and standoff on Thursday, in which Mr. Shiffer and officers traded gunfire, the authorities provided limited details about the assault on the F.B.I. building that set off those events, and the possible motivations for it.

No one other than Mr. Shiffer was injured or killed on Thursday.

Officials with the Highway Patrol and the F.B.I.’s Cincinnati office said they had no plans to release additional information on Friday. A spokeswoman for the Ohio Attorney General’s Office said the state’s Bureau of Criminal Investigation was investigating the use of force by state troopers, but she did not answer other questions about the case or indicate when more information would be released.

A spokeswoman for Gov. Mike DeWine, a Republican, declined to comment.

There was similar quiet from many in the Biden administration. When Attorney General Merrick B. Garland spoke Thursday about the search at Mr. Trump’s home, he did not mention the attack in Ohio.

A handful of officials directly condemned the assault, including Representative Mike Carey, a Republican whose district includes the site of the standoff. “In America,” he said on Friday, “we do not threaten or take violent action against law enforcement.” Earlier in the week, Mr. Carey had called the search at Mr. Trump’s home “a danger to the Republic” that he said eroded faith in the Justice Department.

Senator Sherrod Brown of Ohio, a Democrat, called what happened in Cincinnati “an appalling attack on law enforcement.”

“We live in a country of laws,” Mr. Brown said in a statement, “and it’s the duty of all leaders to calm — not stoke — political violence and extremism.”