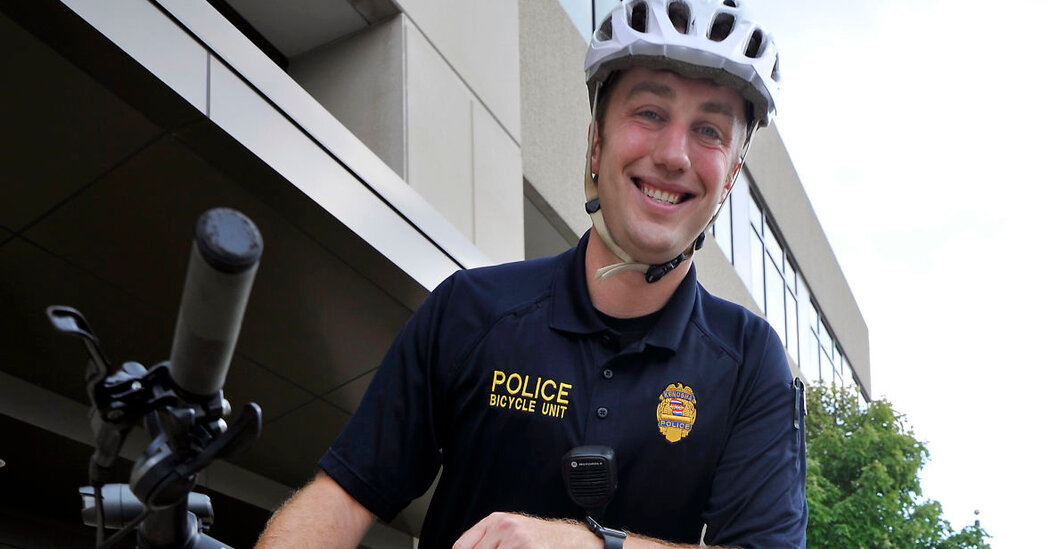 Rusten Sheskey, the police officer who authorities say shot Jacob Blake in the back on Sunday, is a seven-year veteran of the Kenosha Police Department who long aspired to a law enforcement career and once described police work as “a customer service job, and the public is our customer.”

Officer Sheskey, 31, has been put on administrative leave while Wisconsin officials investigate the confrontation caught on video in which he is seen shooting while Mr. Blake leans into the driver’s side of his car. Mr. Blake remains in stable condition in a hospital, though his family’s lawyers say he is paralyzed.

State authorities said Officer Sheskey fired his weapon seven times while holding on to Mr. Blake’s shirt during an arrest. They also said that investigators found a knife on the driver’s-side floorboard after the shooting. But a lawyer for Mr. Blake’s family, Benjamin Crump, has said that Mr. Blake did not have a knife in his hand, and that he was trying to get into his car to protect his three sons, who were in the back seat.

The Kenosha police have not released Officer Sheskey’s employment file. The only disciplinary infraction that has surfaced during his time with the department was a one-day suspension without pay in 2017 for an unspecified violation of policy related to the safe use of department vehicles.

He was also sued in 2015, along with the city of Kenosha, in a personal injury case that involved a vehicle. The court docket indicates that the case was resolved a year later. He also pleaded no contest in 2014 for a traffic infraction involving his failure to obey an officer or traffic signal.

According to county records, he started his job in April 2013 after working as an officer at the University of Wisconsin-Parkside campus, which is outside Kenosha. While at the university, he responded to reports of hate crimes at the school, including one involving the discovery of nooses and a flier threatening Black students.

Officer Sheskey’s grandfather was a longtime officer for the Kenosha police, according to a department Facebook post.

Officer Sheskey was a competitive bicycle racer in high school, taking part in races as far away as Muscatine, Iowa. He has been a member of the Kenosha department’s bike squad for several years, an assignment that freed officers from the constraints of a patrol car and allowed them to interact more with the public, he told The Kenosha News last year.

Officer Sheskey told the newspaper that “for the most part” he had always wanted to be in law enforcement.

“What I like most is that you’re dealing with people on perhaps the worst day of their lives and you can try and help them as much as you can and make that day a little bit better,” Officer Sheskey said.

He added: “We may not be able to make a situation right, or better, but we can maybe make it a little easier for them to handle during that time.”