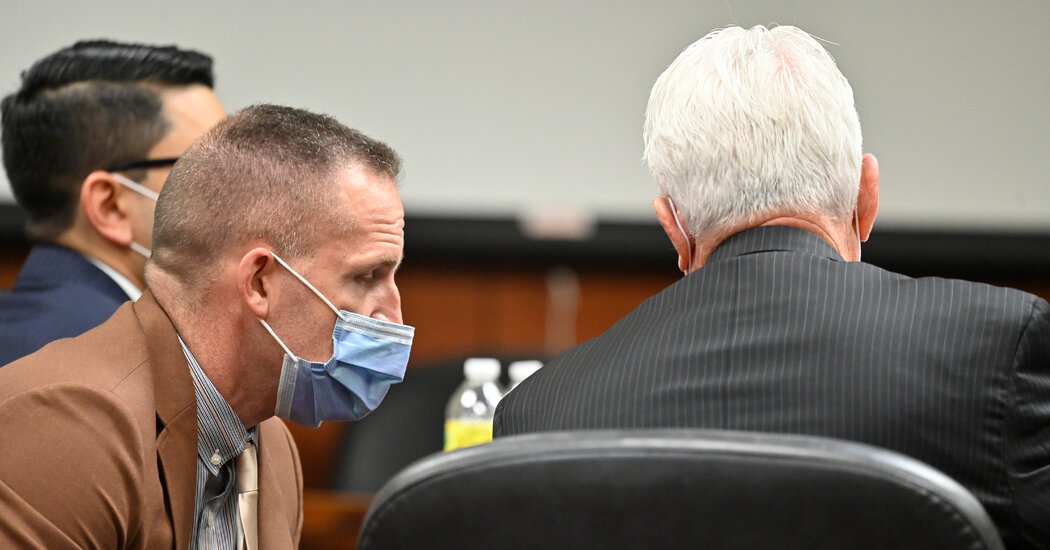 The only trial to emerge from the nighttime police raid that killed Breonna Taylor began on Wednesday, but the case centers not on an officer who shot her, but rather on a former police detective accused of recklessly endangering her neighbors with a hail of bullets that inadvertently hit their apartment in Louisville, Ky.

The detective, Brett Hankison, was dismissed several months after the March 2020 raid and is facing three charges of wanton endangerment after firing 10 shots during the operation. The former chief of the Louisville Metro Police Department said that when Mr. Hankison fired “blindly” into Ms. Taylor’s apartment, several bullets entered a neighbor’s apartment, endangering the three people who were sleeping there: a pregnant woman, her husband and their 5-year-old child.

“This is not a case to decide who is responsible for the death of Breonna Taylor,” the state’s assistant attorney general, Barbara Maines Whaley, said during opening statements of a trial that is expected to take about two weeks.

Ms. Whaley said the prosecution’s case would show that the former police detective acted that night with “extreme indifference to human life” and that he made several missteps that endangered the lives of Ms. Taylor’s neighbors, Chelsey Napper and Cody Etherton, as well as their son.

The defense, in its own opening statement, described Mr. Hankison as a veteran police officer who responded appropriately to what he perceived as a threat.

“You are going to discover that this scene was total chaos,” Mr. Hankison’s lawyer, Stew Matthews, told the jury.

When officers broke down the door during the raid that began after midnight, Ms. Taylor’s boyfriend shot one officer in the leg. The boyfriend, Kenneth Walker, later said that he had not heard them announce themselves and believed that they were intruders. Officers returned fire, killing Ms. Taylor.

Mr. Hankison fired 10 bullets into a patio door and window of Ms. Taylor’s apartment without a clear line of sight, and some of them entered the neighboring unit.

While none of Mr. Hankison’s bullets hit anybody, two other officers fired bullets that struck Ms. Taylor, who bled to death after being shot five or six times.

One of her neighbors, Mr. Etherton, described a terrifying barrage of gunfire that hit his apartment.

“To me, a professional, a well-trained officer, should have had the floor plans, the blueprints — they didn’t even know whose back door it was, they didn’t know who lived there,” said Mr. Etherton, the first witness to testify. “That kind of upset me. It was just reckless to me.”

Mr. Etherton said he awoke that night to the sounds of the police ramming Ms. Taylor’s door open. Moments later, bullets pierced their shared wall. As Mr. Etherton walked toward the door, he said, debris pelted him in the face, forcing him to crawl back to the bedroom.

The bullets, he said, were just short of hitting him and his son.

After the shooting stopped, Mr. Etherton moved to the back patio door, where he encountered police officers, guns raised.

During cross-examination, Mr. Matthews questioned the sincerity of Mr. Etherton’s claims of fear, noting that he and other neighbors had filed a lawsuit against the Police Department.

“That hasn’t influenced your testimony here today, correct?” Mr. Matthews asked. “The fact that you’re trying to get some money out of this?”

Both the defense and the prosecution grilled the next witnesses, police officers who had played some part in the nighttime raid, on the details of what happened. This included an officer who had obtained the search warrant for Ms. Taylor’s home and others who had not participated in the raid but were present at the scene, or who had surveilled the apartment beforehand.

One of them, Sgt. Jason Vance, a member of the unit that investigates police shootings, said he met with Ms. Taylor’s family members when they arrived outside the apartment complex.

“There was no doubt — it was clear — that Breonna was still in that apartment, deceased,” he said. “It was a very hard conversation.”

The killing of Ms. Taylor brought renewed scrutiny to no-knock warrants as competing accounts emerged about whether the police had identified themselves before knocking down her door. Officers had initially received a judge’s approval to serve a “no-knock” warrant, but the orders were changed before the raid, requiring them to announce their presence before entering the apartment.

Critics also questioned the justification the police used to obtain a warrant to conduct the raid. The police had told the court they believed they might find evidence of drug trafficking connected to Ms. Taylor’s former boyfriend, saying they believed that he had used her apartment to receive packages linked to drug dealing.

But Ms. Taylor had recently severed ties with him, according to her family’s lawyer, and her ex-boyfriend was already in custody by the time officers raided her apartment. The police also did not have an ambulance stationed in the area, though it was the department’s standard practice to have one nearby.

Since Ms. Taylor’s death, several cities, including Houston and Minneapolis, have restricted the use of no-knock warrants. This month, a Minneapolis police officer shot and killed Amir Locke, a 22-year-old Black man, while serving a no-knock warrant on an apartment downtown.

There were protests in Louisville for more than 100 days by people upset that no officers were charged in Ms. Taylor’s death. After the Kentucky attorney general, Daniel Cameron, announced that his office would not charge either of the two officers who shot Ms. Taylor, the grand jurors who indicted Mr. Hankison said Mr. Cameron had never presented them with that option.

Under Kentucky law, a person commits the crime of wanton endangerment when he or she “wantonly engages in conduct which creates a substantial danger of death or serious physical injury to another person,” and does so “under circumstances manifesting extreme indifference to the value of human life.” Other states may use terms like “reckless endangerment” for an equivalent offense.

The crime is a felony and can bring a sentence of up to five years in prison and a fine for each count. Someone can be guilty of wanton endangerment even if the person did not intend to harm anyone or to commit a crime.